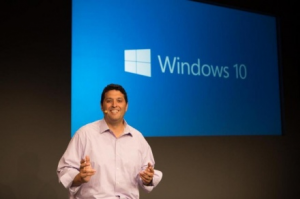 Wait 'Til January for the Next Update?

In the opening of the Windows blog post, the author Gabe Aul is apologetic to Windows Insiders for the fact that there has not yet been a build released during the month of December, while also pointing out that some of the expected builds have already been leaked (referring to 9888 and 9901), and that next month we could see the announcement of the biggest and best build yet – one that combines all of the expected builds into a mega-update that Microsoft is calling the first Consumer Preview of Windows 10.

Surprisingly, the developers at Microsoft don't seem to upset about the leaks that got out this month, taking the approach that they may just bring extra attention to next month's Consumer Preview, while also making the entire Windows 10 development process more transparent. It appears that one of the primary goals of the Windows 10 Technical Preview was to involve users in the development process more than any previous version of Windows. Thus, leaking information about upcoming updates isn't necessarily a bad thing from a PR and open development perspective.

Is 1.5 Million Really a High Number Though?

Back in the second week of October Windows reported on its blog that there were already 1 million testers signed up with the Windows Insider program, and that was only two weeks after the program launched. While the upcoming OS has only been able to attract an additional half million in the past few months, approximately one third of all users are actually using Windows 10 Technical Preview on a daily basis.

According to Mr. Aul, the heavy usage from testers in these early stages has allowed Microsoft to fix more than 1,300 bugs, thanks mostly to community reports. Still, some analysts feel that 1.5 million testers is a lower-than-expected figure, considering the current number of Windows users worldwide. Speaking of which, 1.5 seems to be a magic number for Microsoft lately, as earlier this year they announced that there are a total of 1.5 billion devices running on some form of Windows.

With statistics like this readily apparent, it seems that the Windows 10 Insider Program is holding true to its name, gathering valuable input from a relatively elite group of Windows users that have chosen to be among the first to use the pre-release version of what is measuring up to be the best version of Windows yet. Furthermore, Windows 10 will still be the most user-influenced version ever, with 450k active users, which is a bigger user base than that of any previous beta version of Windows, and certainly enough to provide plenty of feedback for a fine-tuned development process.

Many people still aren't aware that the pre-release version of the next generation of Windows is already available for free and will be released to consumers as a free update. Windows 10 could also eliminate many of the malware threats that current versions of Windows encounter. We're a couple days away from the dawning of a new year that could bring some of the biggest changes we've ever seen to the Windows operating system.

Microsoft has already announced that it will be unveiling the specifics at a media event on January 21st, so that will be a milestone to look forward to, especially for users of the Windows 10 Technical Preview. The event is being referred to as “the next chapter,” and is expected to reveal a lot about the upcoming commercial release of the revolutionary Windows 10 operating system. Some analysts even suggest that 2015 “could be year of the Windows renaissance,” re-attracting a lot of Windows users that chosen not to upgrade to Windows 8 and other previous versions.

What about Windows 9 though? There have been a lot of indications to suggest that there will be no Windows 9, or that Windows 10 will be released before or in place of Windows 9. If you want to download and use Windows 10 for free right now, start by learning about the Windows 10 Technical Preview and Windows Insider Program.