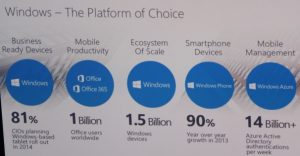 Announcements and keynote speeches have been coming thick and fast from Microsoft of late. The latest has been provided via a keynote speech at the Windows Partner Conference on July 16 from appropriately named Tony Prophet. He is the Corporate Vice President for Microsoft Windows Marketing.

Surprising numbers from Microsoft released earlier in the year indicated that over 4.4 million Office 365 users have already subscribed to the Software as a Service model. There were 250 million OneDrive users, Outlook.com has 400 million active users, Bing has an 18% share of the American online search market and XBox has 48 million XBox Live members. Also, as a leader in VoIP Skype has 2 billion minutes used per day.

One good reason for Microsoft to not be shy about gaining headlines with the above statements is that it reminds software developers for different devices that the company is still very much a mover and shaker in the tech industry.

Microsoft is seeing growing momentum with Windows-based tablets in 2014 from hardware manufacturers who find value in a 3rd platform after iOS and Android.

Windows adoption is not even across the different versions though. Adoption of Windows 8 and 8.1 has not been met with overwhelming support in some corners.

One of the reasons for this has been the initial removal of the traditional Windows Start menu in the bottom-left corner of the desktop, replacing it with a tile-based screen instead.

Another reason is that often computer systems, peripherals and software that Windows users own will not be compatible with the new version. For such users, an upgrade of operating system versions would necessitate replacing currently usable hardware and software just to do so. For this reason, many potential users of the latest versions of Windows tend to skip a generation or wait until they purchase a new laptop with the latest version of Windows installed already.

According to Net Applications (as detailed on ZDnet in greater depth) at the start of July 2014, the combined Windows 8 and 8.1 still only had a Windows market share of just 12.54%, whereas the previous version, Windows 7, has retained a 50.55% share.

In a move to improve adoption rates on lower powered devices, Microsoft has reduced the licensing cost to install Windows on desktops, laptops, tablets and Windows Phones. New Windows-based devices in the low- and mid-range should be more competitively priced in the future.