Microsoft Schedules â€œWindows 10: The Next Chapterâ€ Event for January 21st, 2015 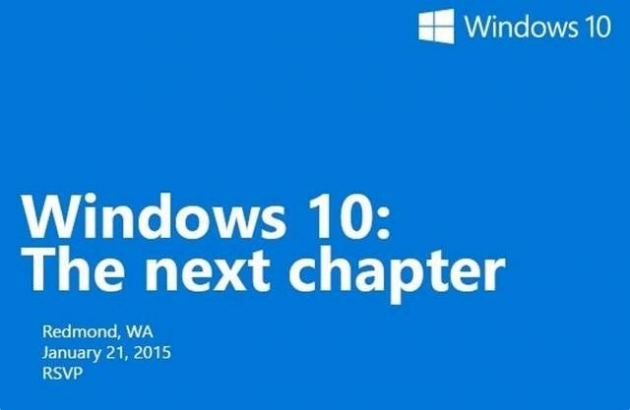 Back in late-September Microsoft announced Windows 10 and the Windows Insider Program, quickly attracting 1 million sign-ups by mid-October (which has recently increased to 1.5 million sign-ups as of December). Halfway through last month, Microsoft gave us a specific date to look forward to – January 21st, 2015. That's the day the software giant will hold a special “Windows 10: The Next Chapter” announcement event at its Redmond, Washington campus, revealing exciting new features that will enhance the security and performance of the operating system for both home and business users.

Windows 10 was initially presented primarily as an enterprise product that would have an interface similar to that of Windows 7 or Windows 8. However, much more has been added since then, including revelations that this version of Windows will most likely be released in place of Windows 9, could be made available as a free update, and may even tackle most of the malware issues that affect current and past versions of Windows.

What to Expect on the 21st

In recent months, Microsoft has added a slew of new features to the Windows 10 Technical Preview, creating some fairly impressive beta builds, but next month's update is expected to be bigger than all of the previous builds put together. In addition to introducing the newest features in the upcoming build of Windows 10 (which Microsoft is calling the first “Consumer Preview” of the product), Microsoft is also expected to reveal details about its new touch screen interface called Continuum, as well as plans for future Windows phones and tablets.

The upcoming announcement is expected to be even more significant than the San Francisco event at which Windows 10 was originally announced, as we will be learning a lot about how Windows 10 will set itself apart from its predecessors and bring the OS into the “next chapter” that the event is named after.

Microsoft CEO Satya Nadella is expected to be in attendance, as is Windows chief executive Terry Myerson, head of the Xbox department Phil Spencer, and the phone/tablet/PC chief Joe Belfiore. With so many key executives on the attendance list, and with it being a live streaming event, there's a good chance we'll get an in-depth look at how Windows 10 will interact with and perform across various types of devices.

Recent reports also suggest that the event will be of interest to both Windows and Xbox gamers. While Windows 10 has been described as being unified platform for all of Microsoft's products, it is still unclear whether this means Windows 10 will be able to run on the Xbox One. With that said, we expect to learn more about the connection between Windows 10, the Xbox One, and other Microsoft products at what could be the biggest Microsoft announcement of the this decade, considering the fact that there will supposedly be no more versions of Windows released after Windows 10.

Windows 10 for the Next Decade?

There have also been reports that Windows 10 will be the name much longer than the typical three-year cycle between Windows 7 and Windows 8. That could mean that Windows 10 will be the latest release of the OS for the next 5 years or more. This is part of a new phase of OS development in which all updates and future releases of Windows are expected to be free to consumers who have a valid license of the operating system.

In other words, you don't have to worry about having to pay for Windows 11 three years from now, as Windows 10 should still be receiving free incremental updates. Speaking of how long Windows 10 will be around, you might be wondering what will come after Windows 10?

#news #microsoft #windows #windows 10
Comments (0)
< PREVIOUS ARTICLE
Hydrogen Power Cell: 7 days' smartphone power, no electricity needed
NEXT ARTICLE >
What Comes After Windows 10: Will There Be a Windows 11? Is This The Last Version of Windows?