Major Windows 10 Update Coming in January, Expected to be Biggest Build Yet 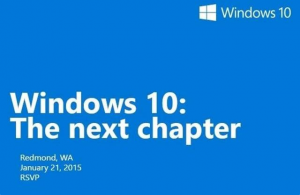 This month we saw two builds of the Windows 10 Technical Preview (9888 and 9901) prematurely leaked, giving many Windows 10 enthusiasts the false impression that we would be seeing another official build release before the new year. We've since learned, however, that Microsoft now intends to hold the next build until mid-to-late-January, and that it will be announcing the key changes coming to Windows 10 at a special media event on January 21st.

The Windows 10 Technical Preview has been available for free through the Windows Insider Program for a couple months now, but next month's update marks the first build worthy of being called a "Consumer Preview" by Microsoft.

The upcoming build is expected to incorporate all of the new features contained in the recently leaked builds and then some, creating an OS that Microsoft feels comfortable giving to consumers as a preview of  the upcoming finalized version of Windows 10. Just how much better will this Consumer Preview be in comparison to the Technical Preview we've been using for the past couple months? Well, if we take Microsoft's heralding claims of inevitable awesomeness to be true, then we could be seeing an OS that is leaps and bounds more robust and user-friendly than the beta version.

A couple weeks back Windows 10 engineering manager Gabe Aul announced in a Windows Insider Program update that the developers are so excited and ambitious about the upcoming build that they've named the internal build branch “FBL_AWESOME.” So why not release the recently leaked builds (9888 and 9901) first, you ask? Gabe explained that the development team is currently so committed to integrating, stabilizing and testing all of the changes in the upcoming build, that releasing an already-leaked build in the interim would only serve as an unnecessary distraction. Thus, it may be better timing to focus solely on the upcoming update instead from a productivity standpoint.

In this month's blog post, Mr. Aul also announced that the Windows Insider Program had reached 1.5 million sign-ups, with 450,000 users of the Technical Preview being considered “highly active.” It was revealed that the development process has led to the correction of more than 1,300 bugs over the course of a few months, and that the Windows 10 preview builds have been used more actively than pre-release/beta builds of any prior versions of Windows.The highly active usage of nearly a half a million users has given Microsoft's development team plenty of data to work with, and that's in addition to specific user-submitted requests for UI changes and new features.

The two builds that were recently leaked are available on torrent and filesharing sites, but we recommend waiting for the official build next month, as you may have to do a clean install to update from the leaked builds. At the least, the second leaked build (9901) will not be compatible with the automatic Windows Update utility. In case you're wondering what happened to Windows 9, in turns out Microsoft will probably be releasing Windows 10 in place of or before Windows 9 – we've already discussed the reasoning behind that decision.