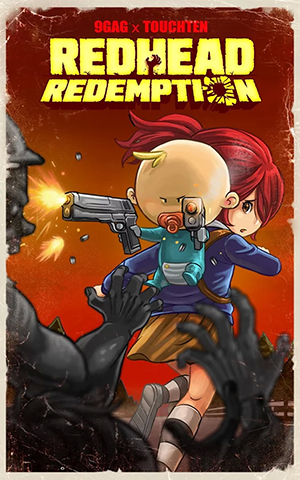 9GAG has taken over the internet and that’s no news. Its massive success has made it one of the most visited and popular sites in the past few years. After the launch of the 9gag app, the people behind the famous site have decided to go one step further and launch a game app that came out only a few days ago and goes by the name 9GAG Redhead Redemption. What’s interesting is that the developers decided to offer their game first on the android and not on iOS, as it usually happens, but it shouldn’t surprise us though considering it’s the 9gag people we’re talking about. Don’t worry iOS users, it will be available on your devices soon enough as well. Just have patience!

The game’s name is an obvious pun of the popular game “Red dead redemption” although the plot is way different than RDR. So, what’s the deal with Redhead Redemption? It is a zombie-type game, which has two main characters; a girl and her infant brother who experience a zombie apocalypse and try to survive against the dreadful attack. The game is basically a rehash of an older game by Touchen called Cute Kill, which made its appearance during 2013 and similarly to Redhead Redemption, it features two siblings; the sister “Red Headed Sister” May and her brother "Gun Slinging Baby" George who is strapped to her back, both fighting against zombies in order to save their kidnapped mother who is kept in a secret Island Base. In Cute Kill the baby is the main character, as it is him who inflicts damage to the dangerous zombies.

In RHR not many things have changed. This time of course, 9gag makes an appearance and makes things funnier than they already were. In this game, the parents of the siblings have both gone missing and zombies have made their appearance once again forcing our heroes to take matters on their hands and save the day! Escape the zombie apocalypse by taking up arms and killing them one by one!

The player must avoid obstacles, defeat the countless zombies which are after the siblings, collect intels, use stray cats to turn them into zombie slayers, activate traps, and of course lead them to where their parents are. 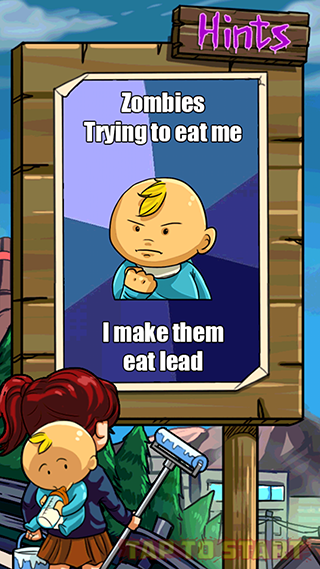 There are various types of zombies that make their appearance throughout the game, some more difficult to kill than others. There are even zombie bosses and you can imagine how difficult to defeat these them can be. The battle style is the same as in Cute Kill; the sister runs and slashes zombies with her knife, whilst the baby shoots at them- and it’s actually funnier when you see it with your own eyes. Speaking of weapons, the player can make upgrades to weapons and get more efficient ones or unlock power-ups, by using coins and diamonds, which will make your journey easier.

The game has 3 game modes: Story Mode, Endless Mode and Nightmare Mode. In the last mode, the player can unlock it and experience a much more intense zombie massacre.

The number of stages is over 100, which means that you won’t experience the same environments over and over again. There are also daily bonuses, as long as you open the game every day of course. The shooting is automatic, which makes things easier but only to a certain extend.

The game belongs to the freemium app category, so the IAP system ruins a lot of the enjoyment as it basically forces you to use it.

And since it’s a game in collaboration with 9gag, memes are a crucial part of it! Many popular rage faces make an appearance, such as zombies with the troll rage face, Bad Luck Brian, Grumpy Cat, Success Kid and others. When they appear you get captions that give you tips and don’t include jokes.

Redhead Redemption hardly has any differences from Cute Kill except the aforementioned 9gag additions and an improved camera view.

The game’s graphics are lovely with hand-drawn animations, plus the music is quite engaging. The characters look adorable and the zombies are hilarious albeit dangerous.

The game is available for Android devices (for free) and will soon be available on iOS as well.