Windows 7 Still Beats Windows 8 and 8.1, XP Has 27% Market Share After Its Termination

About a week has passed since Windows XP was discontinued and it still has 27% of the market share while Windows 8.1 and Windows 8 collectively have only 11% of the pie.

Net Applications published its recent market research displaying Windows 8 and Windows 8.1 have gained a collective 11.30% of the market share, quite an insignificant shift. In the meantime, Windows 7 keeps its steady position occupying 48.77%.

Windows users are being bombarded by Microsoft to get the latest and greatest iteration of Windows OS. The company even made an upgrade to Windows 8.1 a one-step free download for Windows 8 users, a generosity we seldom see from Microsoft, or other tech giants.

Windows Vista lost some of its positions falling some 0.11%, and its market share now is 2.99%. The discontinued Windows XP dropped 1.84%, and now it occupies 27.69% of the market share. As much as Microsoft wanted users to switch to Windows 8, most of those migrating from Windows XP chose Windows 7.

As far as Microsoft versus OS X competition is concerned, Windows OS occupies 90.94%, while OS X slipped to 7.57%, with Linux slightly gaining up to 1.49%. 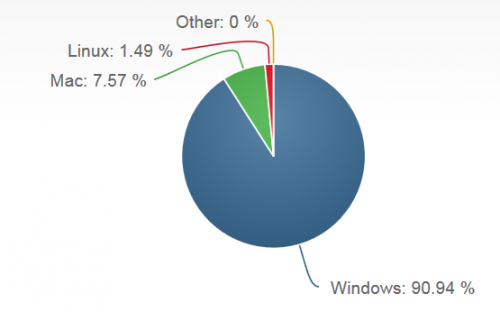 Net Applications is monitoring about 40,000 websites throughout the Internet to capture and analyze unique visitors data; each month, they process about 160 million unique visitors to produce highly accurate statistics. Another popular statistics service monitoring OS market is StatCounter, processing about 15 billion page views, as well as unique visitors. Even though page views number does not equal the actual number of unique users running this or that OS, the ratio still remains in favor of Windows 7, not Windows 8 or 8.1. 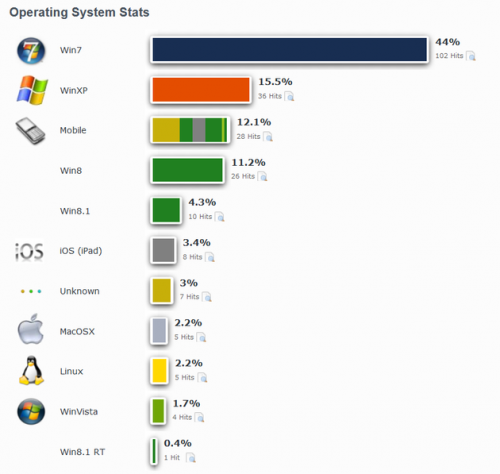 If you made the transition to Windows 7 but you are curious of how Windows 8.1 does look and feel, there's no need to abandon Windows 7 to get a taste. Here's our guide on how to dual boot Windows 7 and Windows 8.1 using a Win 8.1 USB installation.