Home
Articles
How to Use Checksum in Android: Best Apps for Verifying MD5 and SHA1 File Hashes

How to Use Checksum in Android: Best Apps for Verifying MD5 and SHA1 File Hashes

We recently covered MD5 and SHA1 hashes and how you can use them to verify file integrity in Windows. Since most people are browsing the web on their mobile devices these days, it only makes sense to show you how to do the same on Android, especially since many people need to verify the integrity of flashed ROMs and other significant installations that often require root access.

Although you could easily generate hashes with just one of the following apps, there’s always a chance that some might stop working in the future due to lack of updates or other problems, so we’ve listed the top 4 to make sure you’ll always have a working solution to rely on:

Hash Calc is currently the highest rated app of its kind in the Google Play Store with a rating of 4.7. Upon examining its interface, it’s easy to see why it’s leading the pack, with support for MD5, SHA-1, SHA-256, SHA-356, and SHA-512. You can also generate a checksum for a block of text using the Plain Text tab, which is useful for ensuring that a written document or segment of code hasn’t been altered or corrupted from its original form.

Using Hash Calc is as simple as selecting the hash type you want to calculate and then navigating to the file using the Browse button. After selecting the file, you’ll see the generated hash along with the options to export to a text file, copy to clipboard, save as a starred checksum, or compare to an inputted hash value. 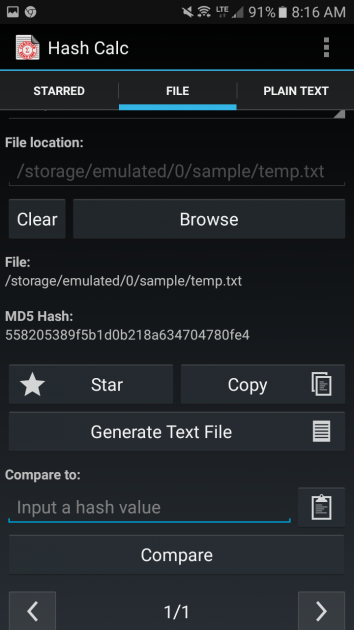 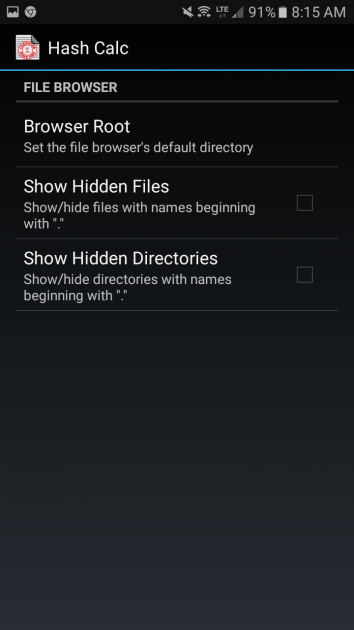 HashStamp is a much more straightforward and streamlined app, with a simple interface that lets you browse to the file after tapping a generic Folder icon. Selecting a file automatically generates MD5 and SHA1 hashes – the only two hash types supported.

There’s a Text tab for generating checksums for pasted blocks of text. There’s also a unique option to quickly share generated hashes using a Share button – a benefit that makes this app worthy of the #2 spot. 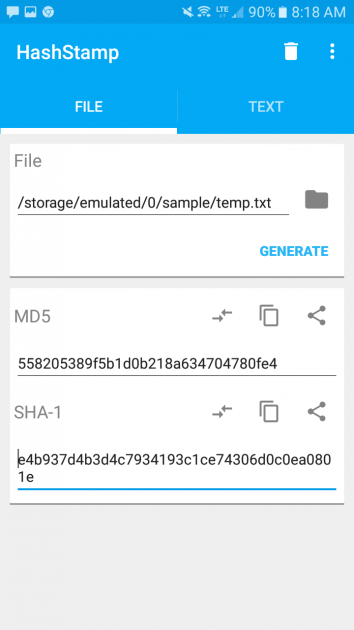 This is the most basic of all the apps on this list, providing a simple browser directory that you can use to select a file, at which point the MD5 and SHA1 hashes are displayed. As with all other apps on this list, there’s a Verify Against Clipboard feature that lets you compare the generated checksum to a copied value to automatically confirm an exact match. 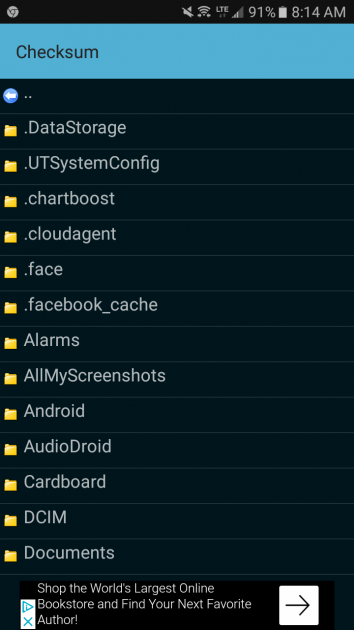 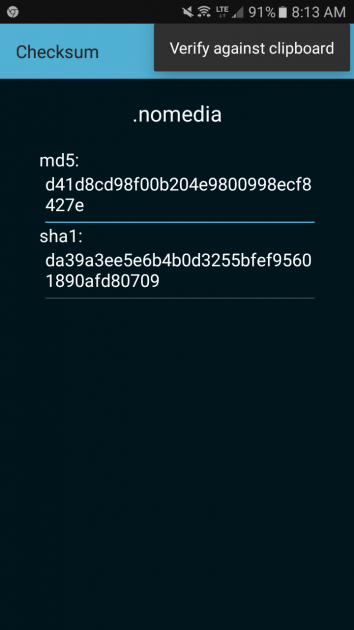 MD5 Checker is another simplistic app that displays only the MD5 and SHA1 hashes of a selected file. You can select two files and it will compare their hashes. If it’s a match, the strings of letters will turn from red to green. As with the others, there’s a text option so it’s a suitable alternative/backup to keep in mind. 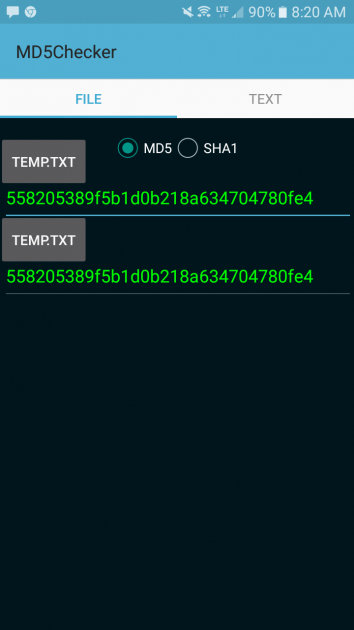 In closing, with malware and adware like RottenSys causing problems related to Android security and functionality, it’s more important than ever to be careful about installing clean files. By comparing the downloaded file’s checksum to the value listed by the official source, you can ensure that you’re not installing an altered or corrupt package.

#android #how tos #security #checksum
Comments (0)
< PREVIOUS ARTICLE
How to fix "TeamViewer_Service.exe has encountered a problem and needs to close" error on Windows XP
NEXT ARTICLE >
What are MD5 and SHA1 Hashes and How to Use Them to Verify File Integrity in Windows