Home
Articles
Windows 10 TP Build 9879 is here. What's new and how to upgrade or get the ISO.

Microsoft made the Windows 10 TP available on 30 September, then it followed with the release of the first update, Build 9860 on 21 October. Now, 3 weeks later, we get to test the next update, Build 9879.

As announced in the official Microsoft blog post, Build 9879 comes with a lot of bug fixes and a few interesting new features and updates as well.

The first 3 upgrades are based on users' feedback.

1. Hide/Show the Search or Task View buttons on the taskbar - You can do this by right-clicking the taskbar and you'll see the options in the image below. 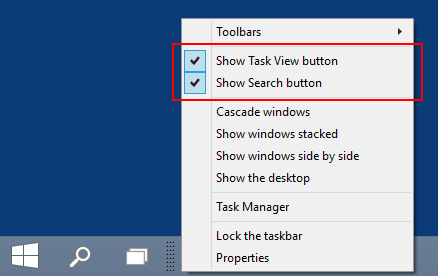 2. New minimize and restore animations for apps - Users reported the last animations implementation was buggy so this should fix the issue. You can still disable them completely using this guide.

5. Interoperability focused Edge rendering engine for 10% of Windows Insiders - These 10% of users from the Insider program will also get a top-right new smiley face feedback button in IE which they can use to report broken websites.

6. Native MKV support - Although MKV support was added since Build 9860, only now MKV files will show thumbnails and metadata in File Explorer. Support for DLNA and 'Play To' scenarios were added as well.

7. More UI refinements - You can now pin/unpin Folders to Home in File Explorer by simply right-click on them and choosing Pin to home/Unpin from home. The folder icon has changed and other icons were added as well.

8. OneDrive changes - You now get selective sync and the files not synced from web will no longer show locally.

If you're already running Windows 10 TP on a Virtual Machine or on dual boot with Win 7 or 8, here's how to get the latest build.

3. Set Fast in the drop-down list there and press Check for New builds or wait for Windows to check for a new build automatically.

Microsoft announced that they will be in fact releasing ISOs for this Build, following users' feedback. As you remember, there were no ISOs for Build 9860 and you needed a guide to create them.

This time around there will be ISOs but not just yet. Microsoft stated that they want to test their update system so they chose to release the Build via Update and Recovery only, for the users choosing to get the update Fast. When the users who opted for Slow will get the update, ISOs will be be made available and we'll update this post with links to them.

Until then, you can still use our guide to create a bootable ISO installation for Windows 10 TP Builds. Just use Step 1, Option A there and follow the remaining steps.

KB3016725 - If you're noticing a KB3016725 update waiting under Windows Update, you're probably wondering what it does. Microsoft's Gabriel Aul confirmed on Twitter that the patch fixes a black screen and DFS (Distributed File System) problem.

Cortana - Microsoft is testing Cortana settings. You'll find them under Privacy > Cortana and speech, in the zPC Settings app, which is used to beta test features that will make it or not to PC Settings.

#how tos #windows #windows 10 #news
Comments (0)
< PREVIOUS ARTICLE
World of Warriors is Editor's Choice in the App Store
NEXT ARTICLE >
YouTube Music Key beta Rolling Out to Subscribers of Google Play All Access. Invite Only for Now.