New Microsoft OS: Windows 10 to be released next year

Today was a day that a lot of Microsoft fans have had marked on their calendar for quite some time, as it was believed to be the day that the company would announce it's next major Operating System version. Microsoft did exactly that, and it's going to be called Windows 10 -- meaning they are just going to skip making a Windows 9 completely. According to Microsoft, the updates are going to be exciting enough to merit jumping two whole version numbers.

Although there will still likely be tweaks and changes to the OS, and this event was directed more at business use rather than personal, it still looks as though there will be some much needed changes and improvements from Windows 8.

Overall, I wouldn't say there is a whole lot of difference between the way Windows 8 and Windows 10 look. The biggest change is going to be somewhat of a merge between the Start Menu and the Start Screen. When Microsoft took away the beloved Start Menu two years ago in order to accommodate touch interfaces, desktop users were none to pleased. Fortunately, this new solution should bring forth the best of both worlds, allowing both Menus to be easily accessible on desktops and touch screen devices. 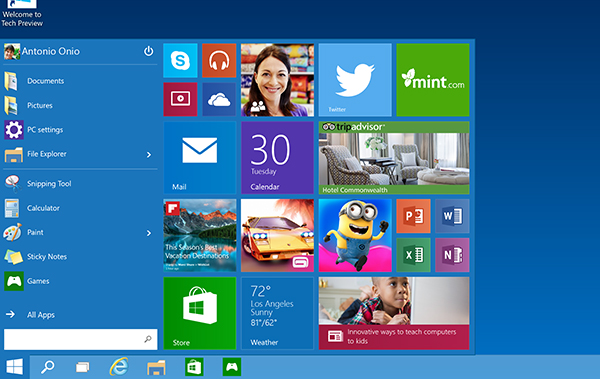 As you can see in the image above, the start menu has received a sleeker, modernized look -- and has the start screen attached to it's hip. You can still customize what shows up, and where it shows up at, and you can do this with either menu. For those using a touch screen laptop, this will be great for having your touch screen oriented apps as large icons, and your main desktop applications readily available on the side when you switch to a mouse and keyboard.

Windows 10 will also run on the broadest range of devices ever, including just about any type of device you can think of: Desktops, Laptops, Smartphones, Tablets, as well as the Xbox One. Microsoft says that devices with screen sizes as small as 4 inches, and all the way up to 80 inches, will be able to efficiently use Windows 10 -- and even some devices with no screen at all. Most of the changes in 10 have been made to benefit both desktops and mobile devices, without sacrificing anything on either side. This is shaping up to be the OS Windows 8 should have been, much like 7 was what Vista should have been.

A lot of people have been curious about whether or not Microsoft will be including Cortana in Windows 10, and although it hasn't been confirmed, it would be surprising if they didn't. Cortana is essentially the Microsoft version of Siri, and was just recently introduced with Windows 8.1. It's quite clear that Microsoft is trying to do everything they can to integrate mobile and desktop platforms, and Cortana would be a great way to do that.

What will it cost/When will it be released?

Unfortunately, Microsoft failed to shed too much light on either of these questions during their presentation. Right now it's mostly left up to speculation, but we heard earlier this week from Microsoft Indonesia's president that the next OS would be made available for free to all Windows 8 users. Oddly enough, Microsoft did not confirm this during their conference, which leaves you to wonder whether or not that statement was true or just taken out of context.

Many are speculating that the new OS will be released for free, but extra features (such as those included with Enterprise versions) will come as part of a subscription. This could help crack down on piracy a bit more, but I can't imagine too many people being fond of the idea that they would be paying monthly for their OS. Others believe that Microsoft will continue it's current pricing structure, but simply release the OS for free on mobile devices only -- which is the norm for smartphones and tablets.

All we know for sure about the release is that it won't come out until Microsoft's developer conference next April, but that doesn't necessarily mean it will come out right away. If you look at the release dates for Windows 7 and 8, you'll notice they are three years and one month apart, so if they continue this trend that would put Windows 10 at a September 2015 release. I doubt Microsoft knows for sure when this will be released, but it would be very surprising to see it get pushed to 2016, given their track record.

If you're really eager to get your hands on Windows 10, you might get your chance relatively soon. Microsoft plans to release the Technical Preview of Windows 10 very shortly, possibly even this week. This beta version is only recommended for those well versed in computers and Windows, and Microsoft warns against installing this on your primary PC. We'll let you know for sure when the beta is available to the public, so keep an eye out here on Download3k.

Microsoft is doing everything they can to make sure that Windows 10 is more well received than it's predecessor, and so far, it looks like they're moving in the right direction.