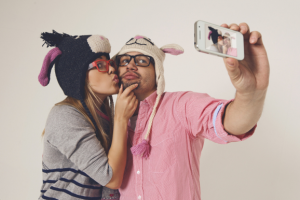 By now if you're an iPhone, iPad, or iPod Touch user, or if you've been following app news, you've probably heard of the new timelapse app from Instagram called Hyperlapse. If not, you should really check it out – it's easily one of the best photography apps out there and it really is the first of its kind to offer quality timelapse production on mobile devices.

However, one of the biggest shortcomings of Hyperlapse was that, before this update, it could only be used to create time lapses with imagery captured by the rear-facing camera. Obviously, this wasn't too much of an offset for most users because the majority of us weren't planning on taking selfie timelapses anyways (or “selfie lapses” as Instagram calls them). Just in case you were looking for that feature and couldn't find it – it is has officially arrived.

The new front-facing timelapse feature has caused a storm of Tweets, with thousands of Twitter users sharing their selfie time lapses under the hashtag #selfielapse.

The recent introduction of the front-facing camera feature marks the first major update to Hyperlapse since its release last month. Although this update doesn't add much functionality in the way of editing and formatting features, the new front-facing mode adds an entirely new aspect to the app, finally giving mobile device users an easy way to take time lapses of themselves and their surroundings.

In addition to front-facing mode, the developers also added support for iPhone 6 and iPhone 6 Plus screens in this update.

According to Josh Constine at Tech Crunch, taking self-lapses is surprisingly easy to do, but the toughest part is choosing whether to keep your eyes on the camera lens that is recording you, or the screen below that shows you what you're recording.

Needless to say, being able to take selfie timelapses and short travelogues on iOS -equipped mobile devices is a huge plus for the adventurer-type that wants to capture what they're up to. Likewise, selfie lapses could (and likely will) start a whole new type of short funny videos like Vines. For now, check out a few examples of selfie lapses posted on Youtube.