World of Warriors is Editor's Choice in the App Store 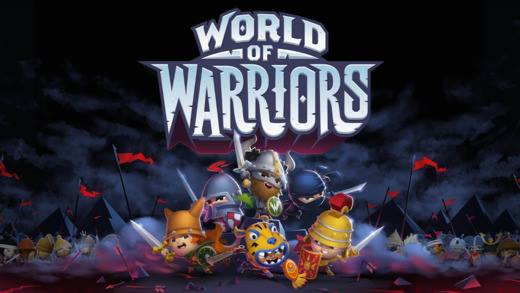 World of Warriors (by Mind Candy) is the most recent Editor’s choice on the iOS App Store. Games that receive such treatment in the App Store are usually worth checking out- and World of Warriors is no exception. First of all, the developers of WoW (not to be confused with World of Warcraft), have become quite famous with another game of theirs, Moshi Monsters. Some of you might have heard it due to its popularity, but it’s mostly directed to young ages. This time around though Mind Candy has decided to do something different; something that would attract more serious players. Their attempt worked out well so here I am now, reviewing this wonderful game.

The player’s goal is to battle the mighty Skull Army and defeat the evil King Boneshaker and his menacing bosses. To do that you must travel across the Wildlands and gather the history's greatest warriors, from Romans and Vikings to Knights and Samurai, in order to create an unbeatable army.

What’s interesting about the game is that the player starts off with a single warrior and then collects additional characters forming a team; or rather, a unit of mighty historical warriors from different countries and timelines. The gameplay style consists of level-based battles which test the player’s reflexive and hand-eye coordination skills.

The battles are like this: The player can bring up to 3 warriors into a fight against an equal-numbered enemy team. Each battle is turn-based, and on your turn you follow some easy steps to attack. More specifically, pressing on the attack symbol activates a power meter on a sword which is located at the bottom of the screen. When the line on the meter reaches the sword’s red area, you press again to strike the enemy. The further the line moves inside the red area, the more destructive it is. In order to perform a powerful attack, you need to time it right; the better its timing, the stronger the attack. I’d like to point out that a battle requires energy, so every time you run out of it you have to recharge which takes time (unless you pay for faster recharging). 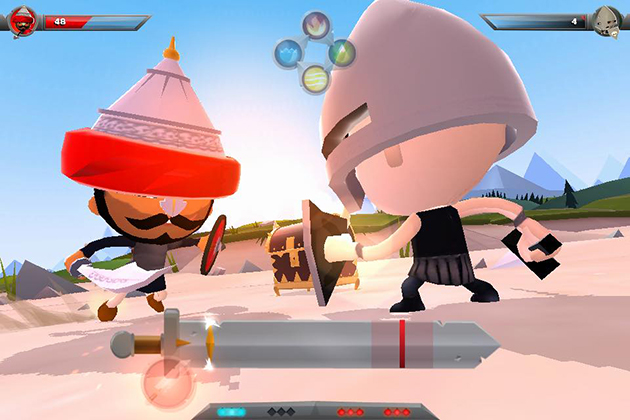 Moving on to the Warriors; each one of them is associated with one element that is his strong point, and each one is more/less effective against a warrior with another element. If you have ever played Pokemon, think of it as the Pokemon’s different types (water, fire, earth etc.). In order to have better chances of winning against another team, the enemy should have an element type that is weaker than yours. Apart from that, each Warrior comes with a special attack as well (e.g. healing power, fire attacks, etc.), which is activated by using Mana. Although it may sound crazy, Mana is acquired when you get attacked by the enemy. The moment you receive the attack you’ll notice blue and red orbs appear on the screen. By tapping on them, these orbs charge the Warrior’s Mana and health. These special attacks are activated with different (but timing-based nonetheless) actions on the screen.

You should be very careful when attacking because using the attack the right moment boosts the attack’s power. As for special attacks, these work a bit differently as they require other quick-time events, with some being harder than others. In general, the battles are not too hard; if you attack wisely and organize your team (based on your Warriors’ elements) things will be easier.

After a battle is over, your Warriors receive experience points. When a Warrior’s XP bar is full, he can be sent to a training camp to level-up. This increases the unit’s health, defence, strength and special attack stats, but bear in mind that training takes time to complete. Players can wait for this time pass, or pay to get back your warrior without waiting. 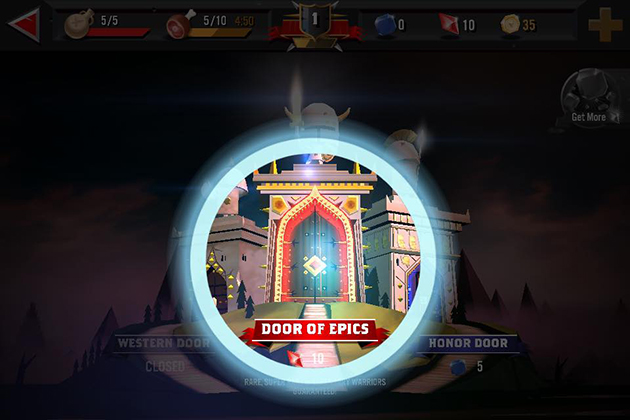 The game’s currency is blue and red gems, which you can spend on acquiring warriors. With red gems you have greater chances to summon uncommon (rare, super rare, legendary) warriors while with blue gems you summon less unique ones. In this occasion, you are able to increase the number of gems by using in-app purchases. It’s also amazing that every warrior has his own bio and fight facts, which are obtained whenever you acquire him.

The main con of the game is in my opinion the necessity to spend money if you want to move further easier. It gets pretty annoying not being able to proceed without money. Also, the game crashes at times but I’m sure that’ll be fixed in the next updates.

The 3D-graphics and sound effects are top notch with unique character designs and great shout-casters that I’m sure you’ll find entertaining.

In conclusion, while I have issues with the monetization techniques of the game, I found it to be entertaining, fun, and very addictive. The more you play, the more you want to move forward. It’s an entertaining, easy to learn game that everyone can enjoy.

Get World of Warriors for iOS here.

(Apparently an Android version of the game is planned for the near future).

#ios #best apps #games #review #world of warriors
Comments (0)
< PREVIOUS ARTICLE
Get IObit Advanced SystemCare 8 with 40% Discount. Buy before 28 Nov.
NEXT ARTICLE >
Windows 10 TP Build 9879 is here. What's new and how to upgrade or get the ISO.