Home
Articles
YouTube Music Key beta Rolling Out to Subscribers of Google Play All Access. Invite Only for Now.

YouTube Music Key beta Rolling Out to Subscribers of Google Play All Access. Invite Only for Now. 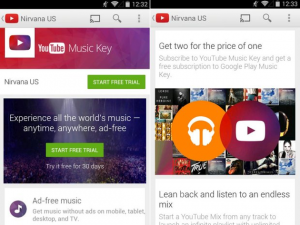 We covered YouTube Music Key back in August when it was at the stage of leaks, rumors and assumptions. Nearly six month later, Google goes public with its new YouTube service for paid subscribers. Music Key is soft launching in beta and some select Google Play All Access subscribers are getting invites in their YouTube mobile apps and e-mails to join the beta testing of the next big thing from Google.

What is known by now about Music Key is the first six months will be free of charge, and later will be priced at $9.99 per month. The promotional price for the first two months is $7.99, though. As of now, while the app is in testing mode, not many will receive an invite, but if you are interested, you can check out how to apply for an invite at youtube.com/musickey.

So, what does this new premium service bring to premium users? First of all, ad-free experience and that's a big advantage. The next awesome feature is offline playback and, hold your breath, background playback. For years, we have been resorting to third-party apps for YouTube in the background playback, and now Google is pushing them off the niche. Wait, not really because third=party apps that allow you to listen to YouTube music in the background are mostly free. What they don't offer, though , is offline playback and ad-free experience.

Besides the big features we just mentioned, Music Key will feature entire albums by your favorite artists, complete with official videos and most famous re-mixes and covers. Also, the albums and videos are supposed to be lightweight on your bandwidth. Mind you that the service only covers the music and musical videos.

How Google managed to negotiate that sort of deal with music copyright holding companies is something that will remain behind the scenes, but Google always gets its way, so it doesn't really come as a surprise.

#news #android #ios #google #music #youtube
Comments (0)
< PREVIOUS ARTICLE
Windows 10 TP Build 9879 is here. What's new and how to upgrade or get the ISO.
NEXT ARTICLE >
Hibernation explained. How to delete Hiberfil.sys in Windows 8 or 10.