Types of Email Scams and How To Protect Yourself From Them

The average user receives several emails daily, some of which contain important information, while others are just advertisements or spam. Among the unwanted ones, however, it is possible that a quite dangerous email is hidden, which aims into tricking the user. In this guide we will present you popular scam techniques performed via email, and how you can protect yourself from them.

There are over 10 different email scams, which, one way or another, attempt to get hold of your money, either by tricking you into paying voluntarily- in the context of an alleged investment- or by unknowingly making you give out your e-banking details. 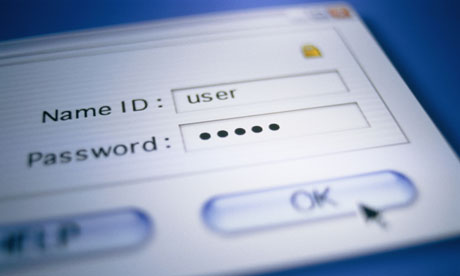 For an experienced user, these scams are pretty obvious. But the scammers behind them send out millions of emails, in order to succeed into tricking just a small number of victims, out of which they will squeeze tens of thousands of dollars.

In this form of email scam, you receive a message from someone who claims to have a lot of money, or a relative/lawyer of a person with great financial standing, and acts as a middleman.

Quite often, this person is supposed to be a Nigerian prince, hence the term Nigerian Scam referred to this kind of scam. It is also referred to as 419 Scam in the article of the Nigerian Criminal Code that describes this type of fraud.

This prince or businessman has a several million-dollar estate, which is "locked" in his country because of war or some other reason. Thus, he needs the help of a third party person to transfer the money abroad.

The motivation to help him in this transfer is the promise that you will get a ridiculously large percentage of the money- from 10% to 30%. 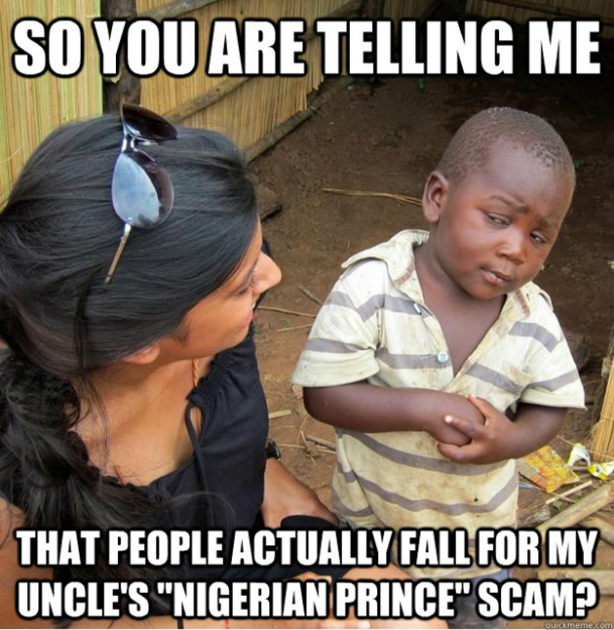 The thing is, that, until you this money is released, you will be asked to pay more and more for bank fees, customs fees, certificates, and other unforeseen circumstances.

While this form of fraud through email has been around since 1980, the elementary form of the fraud dates back to the 16th century. In those years, the property belonged to a nobleman who was imprisoned in Spain (Spanish Prisoner Scam). 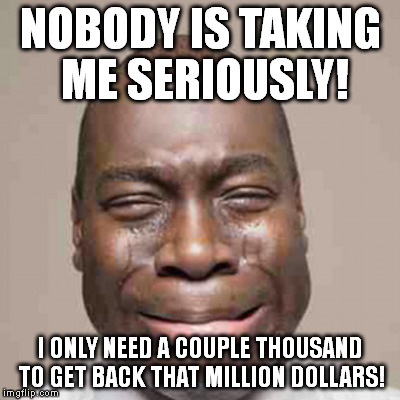 This type of scam is quite exaggerated, and usually fools about 1 in 50,000 people who receive these emails.

Your best ally in this case is the common sense that no stranger is going to give you millions with this method, so you should delete these emails without second thought.

In this type of email scam you receive a message that your email address was randomly selected to participate in an international lottery drawing, and guess what- you won a few million dollars. 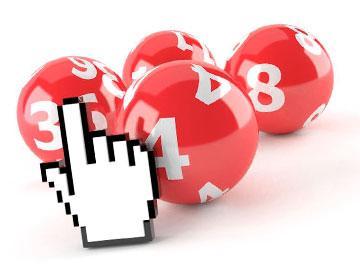 In fact, scammers often use the name of a real lottery company, which obviously has nothing to do with these emails.

Additionally, the "manager" will told you that in order to receive the money you must first pay some money for bank charges, legal fees, certification costs and many other things that mysteriously come up.

People become victims in Nigerian prince scams, so how could there not be people who are convinced that they won a lottery drawing that they didn’t even participate in?

Just keep in mind that it is impossible to win in any lottery if you have not purchased a ticket- let alone that your email address has been chosen randomly and without your own will.

This type of email scams are essentially variants of the previous two, only that in this case the FBI is included in the story as well.

The email says that there is an "official order" from an FBI department in Nigeria, confirming an inheritance or a winning draw of a large amount of money. 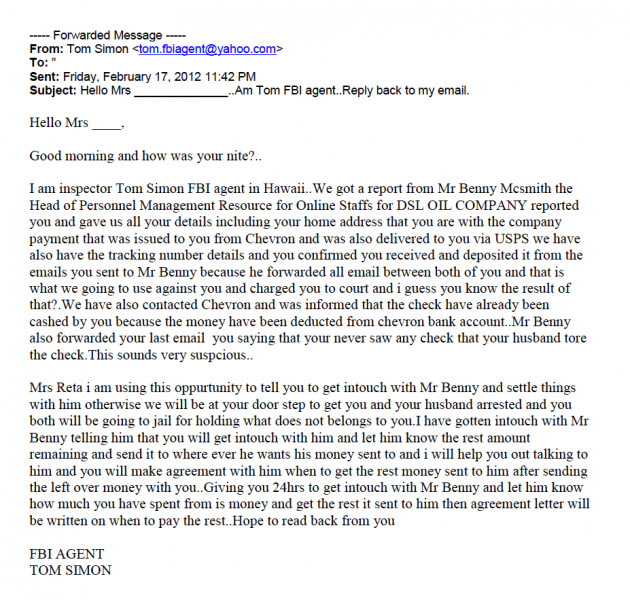 You don’t have to be a genius to understand that there is no way the FBI would contact you via email in order to give you money that you allegedly won/inherited.

These email scams promise you a secure, risk-free investment with a great return.

Very often, the name and logo of the Fifth Third Bank is used, which is a real bank located in the US.

According to McAffee, in 2006 the one-third of this type of email scams referred to this particular bank. 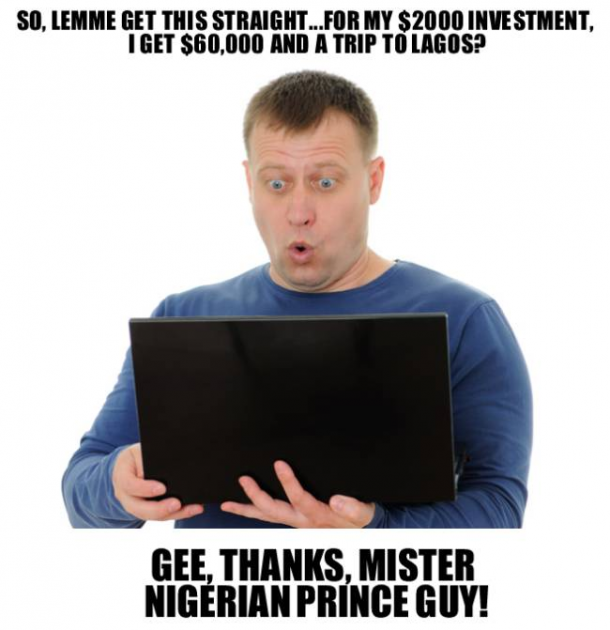 Making good investments is hard, especially if you are not doing it often (if you did, then you would know better). If you receive unexpectedly a message which talks about making a good investment, it is certainly not what it seems to be.

While you’re minding your own business, you suddenly receive an email from someone who’s supposed to be a hired assassin, and has made an assassination contract for you, by “a close friend”. 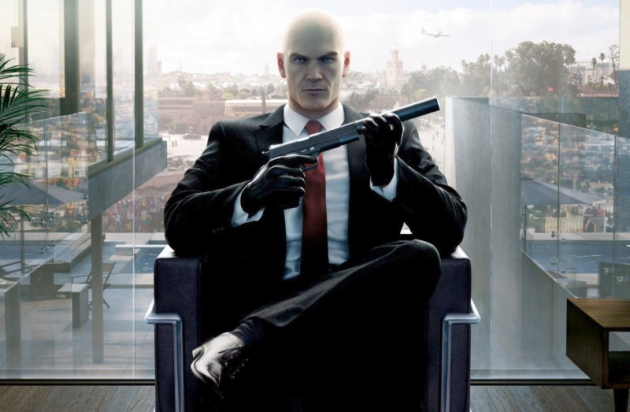 In the received email, he’s essentially asking you to give him more money, so as to cancel the assassination.

In fact, to make the story more appealing, he may propose to assassinate the person who paid him originally. And, of course, if try contacting the police, you know what will happen! 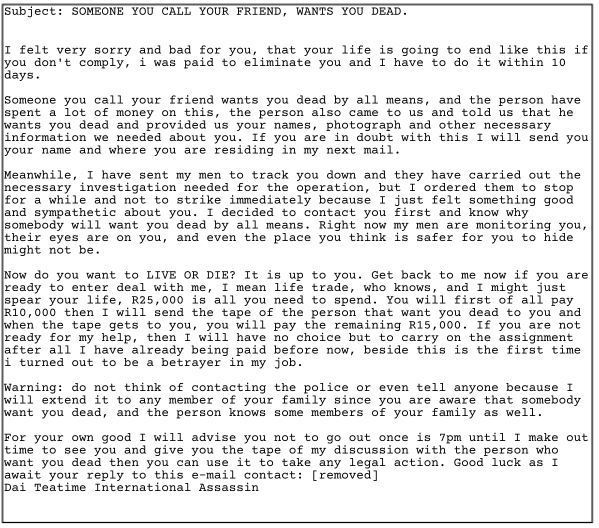 If you didn’t hear “lights, camera, action!” when you woke up, it means that you’re not starring in a movie, and this whole scenario is impossible to happen.

These types of scams usually begin from a dating site, and are soon continued to personal chatting via email. Usually, the scammer turns the discussion towards sexual subjects.

After some time, the victim receives an email that his name, photo and phone number have been made public in a site for adulterers/adulteresses.

The victim will have to pay some money in order to see the site, and perhaps pay even more if he wants his details removed.

If someone who is married visits dating sites and feels threatened from something like this, well, he probably has bigger problems in his/her marriage than this scam.

Unlike the previous scam, these email scams target lonely people.

Essentially, they create a very convincing illusion of a romantic relationship by correspondence. 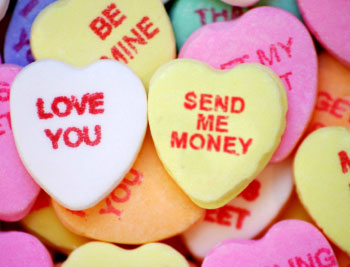 The scammer, after earning the trust of the victim, may request money and attempt to gain access to bank accounts and credit cards, or ask for a “favor” that is ultimately a fraud.

Regardless of how lonely you are, a romantic relationship with a person that you have not even seen and found you randomly via email, is more likely to be a scammer, than your other half.

We don’t know for sure if all of the thousand different sites that promise you brides from abroad are scams, are we’re not willing to find out. 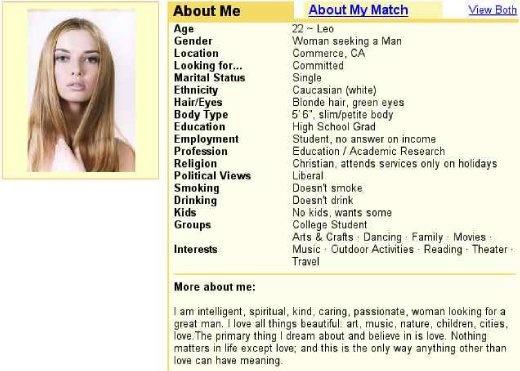 But if you ever get an email out of nowhere that promises you brides from another country, then you should be really suspicious.

This type of email scams begin with the promise of a relationship, and in the process generate various costs, such as translations, video calls, service costs, etc.

Brides of this form, even if they were true, is most likely that they are trafficking victims. Anyways, it is better to stay away from these emails.

Secret shopper is a real profession: people from a market research company visit businesses, posing as customers, in order to rank the service.

Scam emails of this type are mainly targeting people who recently completed their CV in a job search website.

In the next stage of the scam, they send a fake check to the victim, which usually has a significant amount of money.

The victim then is instructed to cash the check and send the biggest percentage of the amount to someone else (who is supposedly a secret customer) through a service such as Western Union.

From the money that the victim will keep, one part is his reward, and the rest is to make purchases at specific stores and record his experience- although secret customers usually do not shop in the context of their job, but just pretend that they’re interested.

Of course, when it’s found out that the check is not legit, the one who will get into trouble is the one who cashed it.

Generally avoid cashing checks, especially in a "job" where all communication is done via email.

If you get contacted to work as an undercover customer, then there should be a real company behind this job.

These email scams exploit the fact that in many countries, traffic tickets are sent by mail. So, the scammers thought that they could fool people by sending them fake traffic tickets by email as well.

Scammers often forge the email address of a real security body, send a notice for an alleged traffic ticket, and include a link for paying online for it. 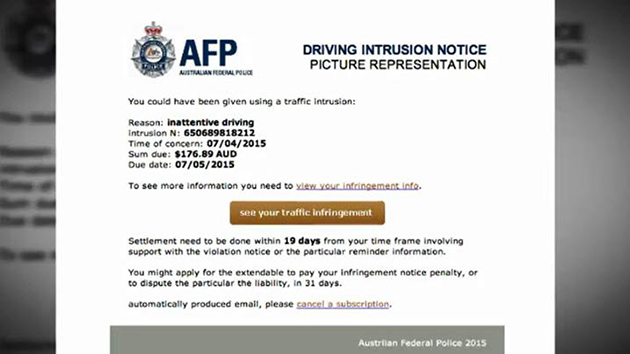 Of course, giving the details of your credit card to this address is very bad.

Actual traffic tickets never come via email, but only via mail, and include clear instructions about where to go in order pay for them.

We left the worst one for last.

In email scams that belong to the phishing scams category, the victim receives an email that appears to be from his bank. It includes all the legit logos, the correct colors, and might even have the bank’s address as the sender too. 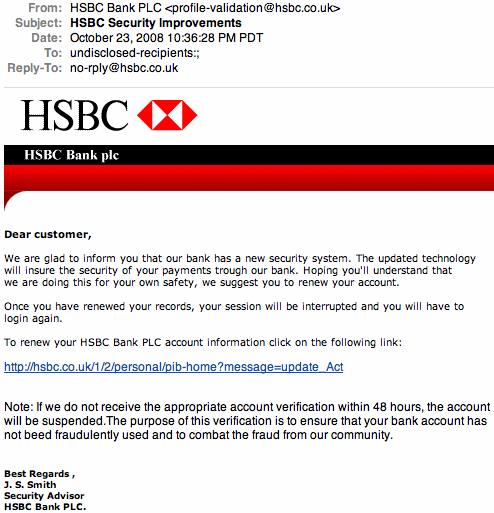 An email like this might be relatively “loose”, as in the above example, but it may also inform the victim that there is a serious problem with his account, and that he should do immediately login to fix it.

Clicking in the email’s included login link, the victim will be redirected to a site which is identical to the bank’s website, except for the URL address. 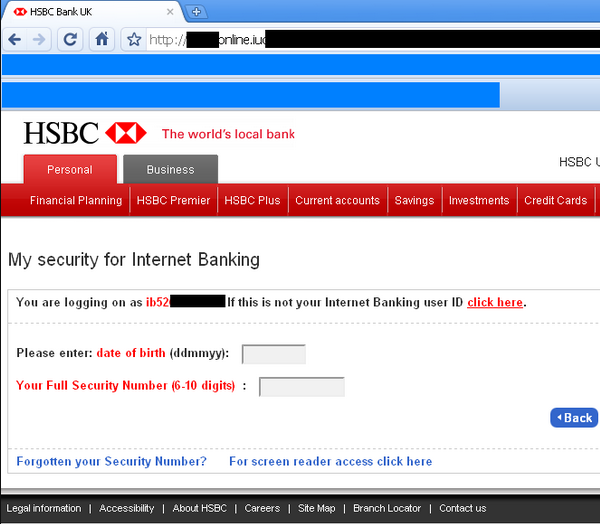 Unfortunately, the site is a 1:1 copy of the bank’s real website. By filling out the e-banking credentials there, the victim practically gives access to his account to the scammers.

It’s true you might occasionally receive a real email regarding your web banking services. Therefore, the easiest way to avoid this kind of email scams is to open a new window in your browser and manually type the address of your e-banking service to log into it.

Under no circumstances should you click on any links in the email. Also, the bank will never ask you to send them your password. 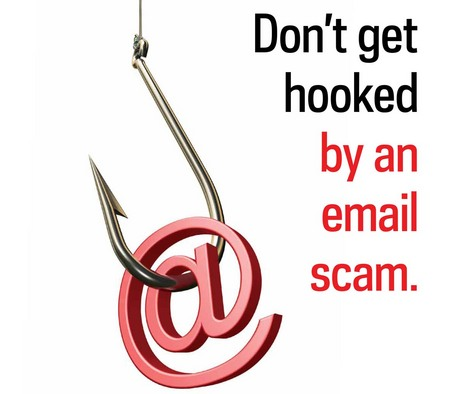 Common sense is your strongest ally when you receive a strange email. But something, however, you should always have in your mind is never get in touch for any reason with the people behind these scams, not even for investigation. You will be surprised at how skillful they are at convincing people.

There are people who were by no means stupid, and yet managed to get convinced into losing a lot of money from these scams.

Therefore, your best friend for email scams is deletion, without a second thought.

#how tos #security #scam #email #nigerian #prince #lottery #money #steal #bank #malicious
Comments (0)
< PREVIOUS ARTICLE
The Story Behind The Most Famous Symbols In Technology!
NEXT ARTICLE >
How to add your signature on a PDF document using only your Android phone

Skype won't sign in automatically in Windows 10. How to manually reset its settings to fix this issue.
on 12 December 2018