One of the big improvements to stability with the Google Chrome web browser was that each new tab opened generated its own process to handle the memory. This made the web browser more stable because a problem with one process relating to a single tab would no longer bring down the entire browser or cause users to lose all the tabs that they had open at the time.

The downside to this approach is that the more tabs a user opens in Chrome, the greater the memory drain. Not all of this memory is handed back when a tab is closed, nor when Google Chrome is closed down. A memory manager is needed to free up the memory fragments so that the Windows operating system will run faster afterwards.

The situation is not the same with Mozilla Firefox which can actually handle over 100 open tabs and use less memory than Google Chrome can with just 30 tabs opened. Now there are at least three Chrome extensions which aims to work around the limitation of this approach to tab management by changing how Google Chrome uses RAM memory. 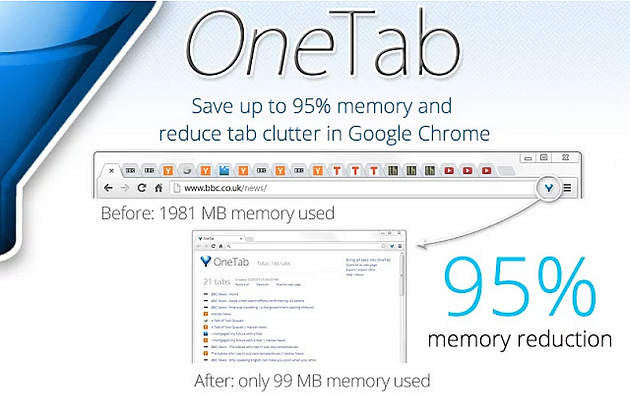 The interface is modified so that the single OneTab produces a list of all your previously opened tabs which a user can scroll down to look at. It is then possible to reopen individual tabs as they are needed or remove them entirely from the list.

Memory usage is extremely low when using OneTab which can cut usage down to as little as 5 percent of what was used previously (depending on how many tabs were left open before). The disadvantage of the process is that it breaks the traditional tabbed browsing interface and switches users to a list that they have to scroll through. This change in user behavior that is needed may be okay for some but be a deal breaker for others despite the obvious memory savings in the use of this Chrome extension. 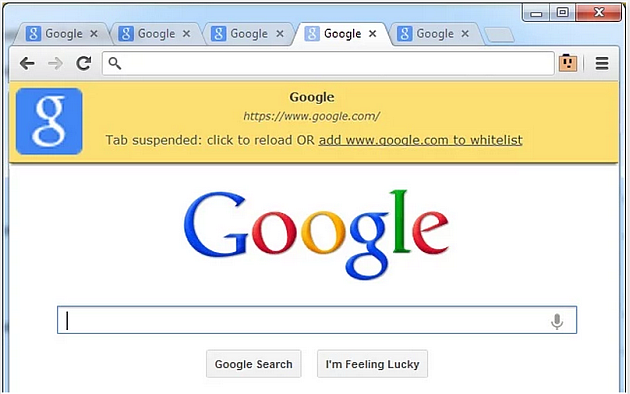 With The Great Suspender, all the tabs are kept in their respective places but the user has the choice whether to suspend the tabs to effectively unload them from memory. When this is done, the tab with become gray to indicate it is unloaded.

A single tab can be unloaded (after it has been activated briefly), all tabs can be loaded into memory or just the ones selected. The extension remembers which tabs were active and inactive the next time Google Chrome is restarted too.

There is a whitelist which can be used to ensure that browser tabs pointed at certain web sites never get suspended. It is also possible to auto suspend tabs when they have been inactive for a specified period of time (excluding those in the whitelist).

The Great Suspender can save a lot of memory usage and some system resources. It is up to the user to decide the trade off between open active tabs versus memory savings. The extension also works well with Session Buddy, a popular tab restoring extension. 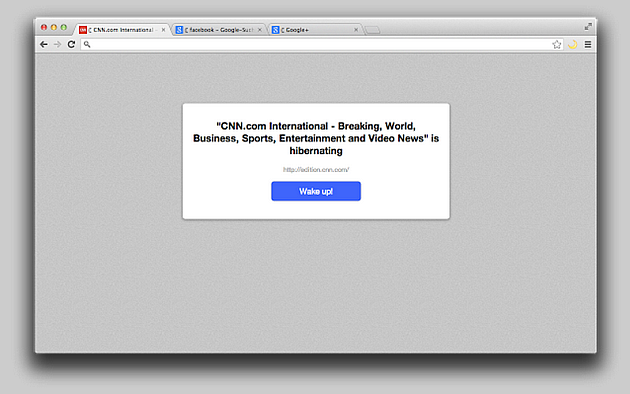 Tab Hibernation works in a similar fashion to The Great Suspender. The tabs stay visible even when hibernated and simply get color adjusted to indicate which tabs are active and which are hibernated. Clicking on a hibernated tab will show the page title and url, with the choice whether to bring the tab out of hibernation.

Tab Hibernation has not gotten past an early beta version (it hasn't reached 1.0 edition level yet). It was last updated in March 2013 which raises the sticky question whether this will have been the last version of the extension ever to be released.

For releasing the most memory and system resources in Google Chrome then the OneTab extension cannot be beat but it does require a fundamental change in how tabbed browsing is used. If the user prefers more user control over which tabs are open whilst maintaining the usual tabbed appearance then The Great Suspender is the best choice.

For more memory problems with Chrome, read How to Check and Reduce Memory Usage of Tabs and Extensions in Google Chrome.