AdBlock Plus Under Attack by French and German Advertising Groups

Internet users are becoming just a little bit more savvy when it comes to blocking internet advertising from their web browser. Many web sites large and small are financially supported by the display and clicking on adverts because the content is offered free of charge to visitors. When ads are blocked, the web sites lose money because the number of ad clicks goes down. 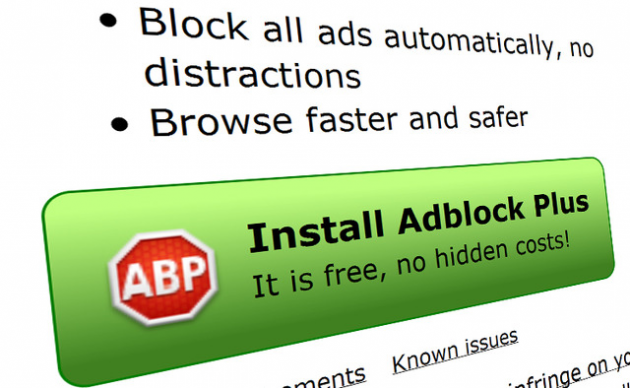 The issue of ad blocking is more centered around desktop use than mobile use presently because several app stores prevent ad blocking software from being added to their catalog (Google certainly is one of these).

Various mobile ad networks display ads inside apps and web pages during mobile use, and these continue unless a user is willing to install a 3rd party ad blocking app from outside the main app store which carries far more risk from malware infections which are harder to remove from a phone or tablet once present than they are from a PC or Mac.

French publishers are now considering launching a lawsuit against the creators of AdBlock Plus. Both GESTE and the French Internet Advertising Bureau are thought to be behind the legal assault. This follows similar concerns over in Germany where the feeling was that advertising blocking is invading their opportunities for German web sites to make money from ad clicking.

At present the GESTE approach is more of a review prior to initiating formal legal action but the lawyers are certain in the room with pens at the ready. The Internet Advertising Bureau in France are believed to feel that they should have done something about advertising blocking years ago and so one has to assume that they are more serious about launching a lawsuit against the creators of the software.

What Is AdBlock Plus?

A web browser can be updated with extra software from tech startup Eyeo GmbH who are the developers of the AdBlock Plus software. The software will block the majority of advertisements from displaying on a web page. We wrote up a recent review of the Mozilla Firefox version of AdBlock Plus which can be seen here.

How Popular is AdBlock Plus?

The AdBlock Plus web browser add on or extension used to be something that only techies or academics knew about but its use has become more widespread due to its effectiveness at ad blocking and its being made available for free.

Presently there are 5 million people in France, 2 million in the United Kingdom, 1.5 million in Spain and its islands who use the software. This is just a drop in the bucket because globally the AdBlock Plus user base is thought to exceed 140 million users which starts to be a noticeable percent of the global internet use. (Figures according to Times of India.)

The growth rate in the use of AdBlock Plus is also a concern given the 69 percent year over year increase in its installation and usage across the internet. Advertising companies are beginning to see the writing on the wall. They feel that 20-40 percent of ad revenue is lost already due to ad blocking software and this will only get worse.

Is Browser Stability More The Problem?

Many users complain that animated Javascript-based adverts and flashing Flash video adverts are invasive. Pop up and pop under ads from less scrupulous sites and now pre-roll adverts that display prior to a video showing on tube sites is becoming too invasive for users who also find their web browser crashing far more often than before.

Installing the ad blocking software can resolve the issue according to some who swear by it.

Does Google Have a Solution?

Google Contributor is a new trial approach by the search and advertising company. It offers users the opportunity to effectively opt-out of seeing display advertisements on their favorite sites if they agree to pay a subscription of a handful of dollars a month in order to cut out the ads.

The idea is current being trialed on a few web sites to see how users take to this kind of approach.

If Advertising Groups Push, Will Users Push Back?

As has been amply shown with movies, music and other digital content, the more media companies attempt to block the distribution and ad copy protection software, the more crafty programmers will get around these blocks.

The smarter approach is to offer TV shows and movies on a pay per view basis via iTunes purchases. This provides the opportunity for users to legitimately pay for the content they want without having to sit through adverts in the process. Digital content purchases are going very well for media companies as consumers have responded positively to this new purchasing channel.

The Google Contributor is interesting also because it is essentially trying to do the same for web sites. We will have to wait and see whether web site visitors will respond positively to the idea.