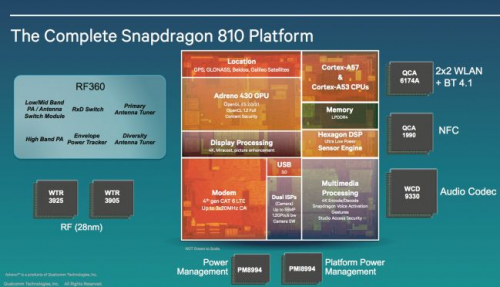 This week Qualcomm unveiled its new 64-bit Snapdragon 810 mobile chip, which is expected to ship in mobile devices during the first half of 2015. The chip will support LPDDR4 memory, 4K video, and LTE Advanced technology, and it is set to be Snapdragon's fastest and most efficient chip to date. Although Windows Phone and Android operating systems are not yet available in the 64-bit form, these new chips are expected to facilitate the transition into faster and better devices in the near future.

The new Snapdragon 810 will be equipped with Qualcomm's latest and greatest graphics and communications technologies, which are capable of rendering 4k video (3840 x 2160 pixels) at the frame rate of 30 frames per second. To put that into perspective – 1080p video can be played at an impressive 120 frames per second. The chip will also come equipped with a modem that is compatible with the LTE and LTE Advanced technologies.

In addition, the Snapdragon 810 will be one of the first chips to support the new LPDDR4 memory chips, which are the most power-efficient RAM chips due to their ability to run apps while consuming less battery life.

Perhaps the most beneficial aspect of the new Snapdragon 810 will be its revolutionary 64-bit design, as this will allow tablet PCs and other mobile devices to utilize more than 4GB of random access memory – a limit that currently can't be circumvented in the 32-bit systems. In other words, because of this new chip, and its successors, the next generation of tablets and mobile devices could be up to 2 to 4 times faster.

Another interesting fact to note about the new quad-core chip is that it contains a mixture of the high-powered ARM Cortex-A57 CPU cores for demanding activities like gaming, along with a couple A53 CPU cores that come into action during low-intensity activities like making calls, playing videos, and sending messages.

Alongside the Snapdragon 810, Qualcomm also announced the upcoming release of the Snapdragon 808 6-core 64-bit chip. This is yet another ultra-powerful mobile processing chip that will be one of the first to utilize the new 20-nanometer manufacturing process.

Unfortunately, the chips don't do much good until Google releases a 64-bit version of Android, but this is by no means impossible, as Intel is already running a 64-bit version of Android with its Merrifield chip. However, most mobile devices use ARM processors (even Qualcomm licenses its Snapdragon through ARM), so Android will have to make a modification to allow 64-bit ARM compatibility in order for the new Snapdragon chips to reach the market.

Fortunately, development of a 64-bit Android operating system is already under way and reports indicate that Linaro (a group of Linux-based developers) are helping to speed up the process. Although Google has not yet specified the exact release date or timeframe for when a 64-bit Android operating system could be released, experts expects the news to be unveiled at the Google I/O conference in July of this year.