Amazon announced the release of a new WiFi-enabled barcode scanner known as the “Dash” stick. With it you can scan the barcodes of grocery items and other household products and then quickly make orders using the AmazonFresh same-day grocery delivery service. This unique home grocery shopping service was launched back in 2007, but it is currently only available to people in Southern Cali, the San Francisco Bay area, and the Seattle area (however, reports have indicated that it will soon be made available in the New York metropolitan area as well).

AmazonFresh offers a catalog of 500,000 grocery and household items (including some electronics and tools), and for people who don't have the time, transportation, or willingness to make frequent trips to the store in the aforementioned areas, it is certainly a convenient service. However, one aspect that is not convenient is having to look up and re-order the same items over and over again, and keeping track of which items you have in stock and which are running low.

The new Dash WiFi barcode scanner solves all of this by letting you quickly and easily scan the barcode on the grocery items in your house and seamlessly add them to your AmazonFresh grocery list. Running low on milk? Scan the carton and add it to your AmazonFresh account – a new carton will arrive the same evening or the next morning. 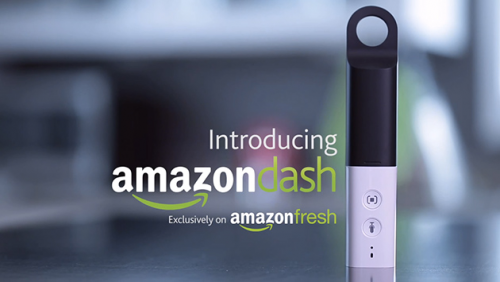 The Dash stick is equipped with a small laser that functions just as effectively as a standard barcode scanner at the grocery store. The device also has a built-in microphone, so you can say the name of the item you want and it will load the item into your AmazonFresh shopping cart. The microphone/barcode configuration has given the Dash the catchy slogan of “Say It or Scan it.”

Unfortunately, the Dash stick is not available to all AmazonFresh customers yet; at the moment it is an invite-only system. Amazon is apparently releasing the device in the beta stage and passing it out for free to eligible AmazonFresh users, so for now it is somewhat unobtainable to the average consumer. If the feedback is good and the beta users like it then it is likely we'll see a commercial release in the not-so distant future.

If you're already an AmazonFresh customer and you've received an invite to try out the new Dash stick you can sign up for it by clicking this link and signing up through your Amazon account.