Home
Articles
How to Enable or Disable Quick Launch in Windows 7, 8, 10

How to Enable or Disable Quick Launch in Windows 7, 8, 10

The Quick Launch toolbar was a major hit with users of Windows XP, Vista, and other older versions of the operating system, but as of Windows 7 it is no longer included in the taskbar by default. Fortunately, it's still possible to restore this much-loved and useful menu with a simple workaround, whether you're using Windows 7, 8, or 10. If you're unfamiliar with functionality of the Quick Launch toolbar, it was an easily accessible menu located to the right of the Start Menu, as shown below:

When Windows 7 was released, Microsoft decided to do away with Quick Launch and replace it with the option to pin program icons to the taskbar. Although icon pinning is a similar solution, many users find that it falls short in certain areas, with the following being the primary reasons to use Quick Launch instead:

With that said, here's how you can enable and disable the Quick Launch toolbar in newer versions of Windows.

Note: This process is the same in Windows 7, Windows 8, and Windows 10.

The first step in adding a new toolbar to your taskbar is to right-click on any empty area of the taskbar, hover over the Toolbars option in the context menu that appears, and then click the New Toolbar... option:

After that you'll see a File Explorer dialog prompting you to select the folder that contains the new toolbar. Since the files for the Quick Launch toolbar still exist within Windows, all you have to do is point to the right directory by copying and pasting the following path into the Folder field: 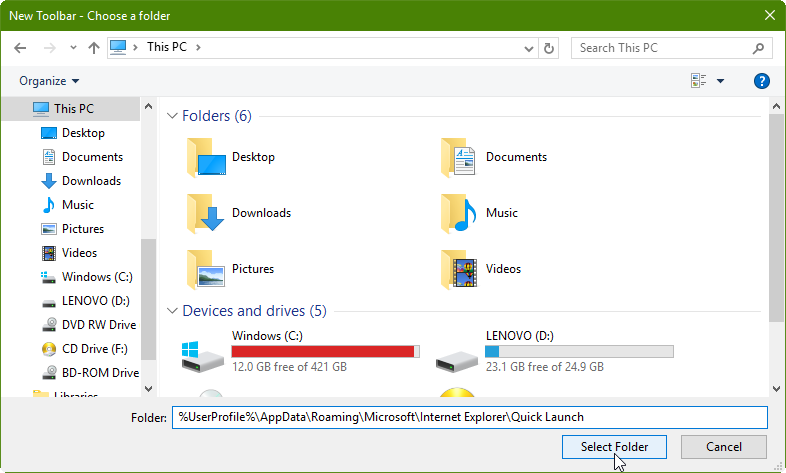 You should now see the Quick Launch toolbar appear in the bottom right corner of the taskbar near the clock:

Of course, once you move the toolbar to the left you'll notice it will take up most of the taskbar, but you can shorten it by dragging the lines or dots to the right of the toolbar into the desired position:

Once you're done positioning the toolbar to your liking, you can then lock the taskbar again to make sure you don't accidentally move anything around. To do this, simply right-click an empty spot on the taskbar and then check the Lock the Taskbar option: 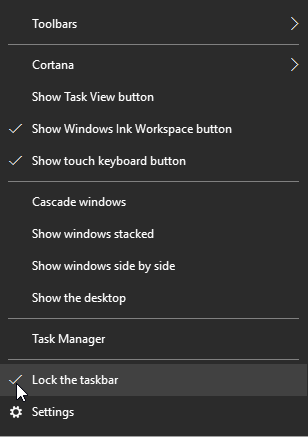 View – In the View menu you have the option of choosing between Large or Small icons. Larger icons are easier to see and maneuver, but they take up more space. Smaller icons let you display more icons within the same amount of space but aren't as easy to click on quickly. Here's the difference between the large and small icons:

Show Text – This option lets you decide whether you want the name of the programs to appear below their icons:

Show Title – This option lets you remove the “Quick Launch” text so that the toolbar is only represented by the small arrows on the right as shown below: 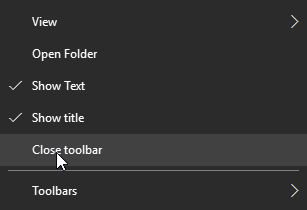 There you have it, with the instructions above you should be able to bring back the Quick Launch toolbar and use it to its full potential for better taskbar organization and convenience in Windows 7, 8, and 10.