Home
Articles
Game Review: Sneak into a basement of secrets in Hello Neighbor (Xbox One, PC)

Game Review: Sneak into a basement of secrets in Hello Neighbor (Xbox One, PC)

If you ever wanted to secretly enter your neighbor's house to find out what's hidden in his basement, then lucky you! Because Dynamic Pixels turns this into reality with Hello Neighbor, giving you the role of a curious guy who really wants to find out what his neighbor is hiding.

The only way to find out what the neighbor is up to, is to get to his basement. To do this you have to cross corridors, crawl drawers, climb stairs, unlock doors and much more without him noticing you. If he hears something or sees you, then he runs over to you and grabs you, forcing you to start exploring from the beginning. Particularly at the beginning of the game, when you still learn the mechanics, the image of the neighbor that detects you is a frequent and recurring phenomenon. The tutorial begins with steady steps, but it stops very suddenly, so you are not sure what you can or should do and what not. Also, this makes the game more difficult than it is, since the problem is not so much the difficulty itself but the lack of familiarity with the environment. 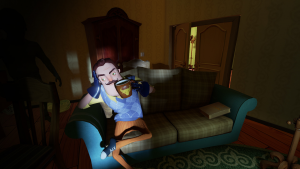 The core of the game is puzzle solving combined with hide and seek. Gather, throw or move almost any object you see in front of you and explore all of the neighbor's rooms. Open the TV with the remote control, break the glass with a ball, turn on the lawnmower, and basically do anything as everything is possible. There is no limitation on the movement of objects. The neighbor reacts to many of them, such as going out to restore the power or to cut the lawn. However, although you seem to be able to do what you want with the items, few combinations have the desired effect and only a few can help you move on. Many puzzles have no logic and are only solved by many random tests or a lot of patience. Sometimes you have to climb with the help of boxes to see what is inside a room or you have to hide inside the wardrobe.

The intelligence of the neighbor is not at all insignificant. Your neighbor learns your favorite routes and places traps, so you are forced to go through places where there are cameras, locked doors or some other danger. It is important to have enough patience to try different paths and tricks to fool the neighbor, find the right items and move to the next rooms of the house.

The stealth part of the game comes with some weaknesses. First of all, most rooms are very large, making it almost impossible to hide behind something, even for a small amount of time. In many occasions the neighbor finds you very easily, even if you bend out of his window. Hiding beneath the bed is safe, but you do not know whether or not the neighbor will pass by, in order to follow a strategy because its movements are unpredictable. The same applies to wardrobes offered as a temporary shelter, which, however useful they may seem to be, are not always practical.

Hello Neighbor is available on Xbox One and PC for $28. 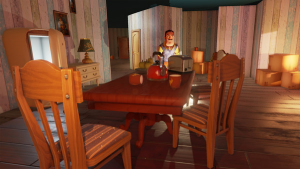 The colorful cartoon graphics are well-designed and give a light tone to the game. The lighting is satisfactory, adequately rendering alternations between a dark basement where the flashlight is necessary and a bright garden. The cutscenes that appear between each act tell the story of the two neighbors, letting you draw the final conclusion on your own. Your neighbor steals the show with his grimaces and carefree behavior, but you do not want to see him often because obviously, you have to avoid him. The musical background is absent, but it is not necessary. The sound effects of the footsteps, both yours and your neighbor's, as well as all the items you collect or throw away are sufficient.

Hello Neighbor is an unusual stealth puzzle that could have many more interesting facts. The horror elements are confined to the atmospheric basement of the house and the hideaway that you play with your neighbor. The game lasts three to four hours if you do not get stuck to a puzzle, but due to the difficulty of the puzzles this can only be achieved by using a walkthrough. The finale hides a slight overturn that may lead to a possible sequel. I suggest you try Hello Neighbor only if you like puzzles that have to do with a lot of searching in the environment and if it doesn't bother you to try out weird combinations until you find their solution. Let us know your thoughts and impressions in the comments below.

Hello Neighbor screenshots (above) and trailer (below)

#windows #games #review #new #hello neighbor #xbox
Comments (0)
< PREVIOUS ARTICLE
The Easy Way to Check your System Against Spectre and Meltdown CPU Bugs (and How to Protect it Against these Vulnerabilities)
NEXT ARTICLE >
How to make a Custom Plugins Folder for Photoshop (Windows, Mac)