Home
Articles
Game Review: Snail Bob 2 is back with more puzzles and funnier than ever!

Game Review: Snail Bob 2 is back with more puzzles and funnier than ever! 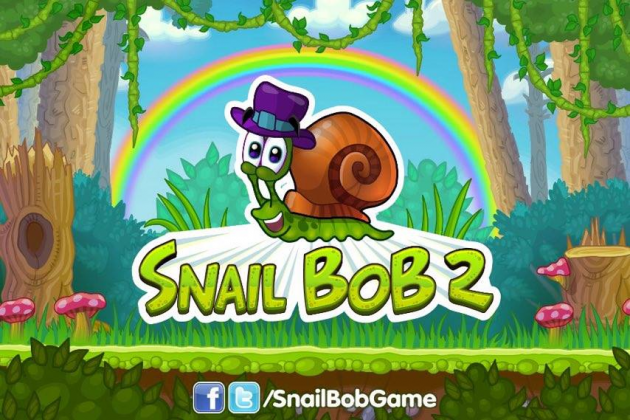 Snail Bob is a game that deserves its spot on the most popular and fun games and it comes with no surprise that it is an award winning one at that. It has a huge fan-base and waiting for the new installment has been a torture as it has been 3 years since its release (for smartphones). So when Snail Bob 2 came out last month I was more than excited to try it out. Not only is it improved in all aspects, but it is also free of charge unlike its predecessor, of course with a few IAPs that will be analyzed later. 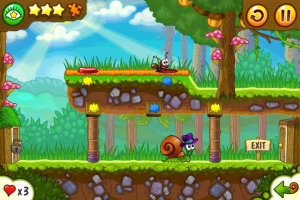 Bob is a kind and sweet snail that goes in various missions to collect various items, save other creatures and deal with enemies in process. Of course it might take him some time to do all that because as we know, snails are not the fastest creatures in the world.  On his quest he will travel through different locations and will need your assistance to overcome the obstacles and find his way to the exit and on to the next level. Snail Bob is a physics puzzle game that will definitely fill your time with joy and fun.

In Snail Bob your job is to make sure Bob doesn’t end up going the wrong direction and come face to face with an enemy or fall into traps. Collecting stars and puzzles is also very important if you want to unlock more levels later on. All your actions are based on tapping and no other controls are necessary. If you tap on Bob he will hide inside his shell, and as a result he will stop moving. This action will prove very useful because Bob moves until you stop him yourself. You can only control the direction he takes by taping on the arrow icon that appears on the bottom right of your screen. Apart from that you will also need to activate mechanisms to open paths, move bridges, elevators and more by tapping on the right buttons.

In your quest you will also come across trapped bugs that will need your help to be freed from their cages. When you do that the bugs will then help you by activating mechanisms that require more than one action. Also, other animals will be present in some levels and while their being there might seem insignificant, trust me it’s not. Usually these animals or bugs hide stars or puzzles behind them that you’ll need to collect. To reveal these treasures you’ll have to tap on them and they’ll move aside sometimes even by making some funny movements which is very entertaining to watch. 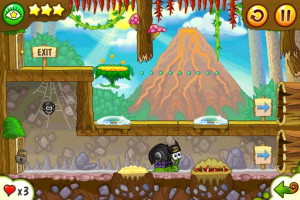 But why are stars and puzzle pieces important? Well each of them serves a completely different purpose. Unlike other games where stars unlock new levels, in Snail Bob stars are necessary to unlock new costumes for Bob and for unlocking Chapters. In each level are hidden 3 stars and while early in the game they are easy to find, later on they will be very well camouflaged to the point that you’ll have to check every part of your screen thoroughly to find. In case you can’t find a star, you can make use of the magic brush feature which pinpoints the location of each star. To activate it you tap on the eye icon on the top left of your screen and watch an ad.

Jigsaw puzzle pieces on the other hand are the key to unlocking bonus levels after clearing the available ones on each chapter. Every chapter has 25 levels plus the extra ones you unlock with the puzzles. Although the stars are available in every level, puzzle pieces are only in selected ones and you can check if the level you’re in has one by checking if its shadow appears next to the stars’ at the top left of the screen. If you collect all pieces available on a chapter, then an image will be formed and the bonus levels will become available. I loved collecting them and trying to figure out what the full picture is about.

You have 3 lives at your disposal and if you lose all of them, it is game over and you’ll have to wait some time for them to refill. If you're lucky you'll also win lives at the lucky draw. While it’s not easy to lose, sometimes you might not stop Bob in time and he’ll end up falling off cliffs or become the meal of hungry fish, frogs and other scary creatures. As you advance, new enemies but also more helpful devices will come to light and the game will keep on getting even more exciting and utterly enjoyable. 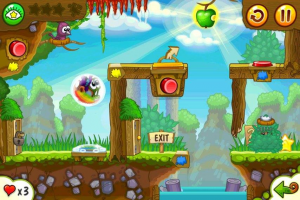 There are very specific purchases you do in Snail Bob 2 and none of them are meddling with the game’s progress or get forceful. They are all optional and can be completely disregarded by the player with no problem. As we mentioned earlier, with stars you can buy costumes for Bob, but you can’t pick the costume yourselves but instead you take part in a lucky draw and get a random one. But if someone wants a specific one and doesn’t want to wait, they can purchase it through IAPs.  The other IAP is for unlimited lives which means you won’t have to wait for the refill to play again after losing the 3 available lives. In addition, you unlock all chapters at once as well, but where's the fun in that? There are also a few ads here and there after some games but nothing too annoying and can be skipped after a few seconds. Or you could purchase the Deluxe version which if free from all IAPs and ads.

Snail Bob 2 looks amazing with 2D graphics and cartoonish designs with a variety of characters and settings and many colors. It is very pleasant for the eye and even the smallest details look beautiful. The BG music is fun and cute and fits the game perfectly.

Whether you’re familiar with the first Snail Bob game or not, it doesn’t matter. Snail Bob 2 is its own thing and will please both old and new fans alike. It has the right amount of humor and puzzles and it is altogether a very entertaining game, that is worth giving a try. Let us know your thoughts in the comments below.

Snail Bob 2 screenshots (above) and trailer (below)