Home
Articles
Game Review: Seasons After Fall is a game that fills you with joy

Game Review: Seasons After Fall is a game that fills you with joy

It is extremely refreshing for a gamer to leave back - even temporarily - the bloody battlefields that flood the games today for the sake of a calm 2D puzzle platformer with a nice visual and allegorical story. This is the Seasons After Fall of the French studio Swing Swing Submarine.

In Seasons After Fall, a mysterious female voice wakes you up from an eternal sleep only to find out that you are a small seed that wants to explore the Forest of Guardians. But to do this you need the right body. So, you are trying to tame an adorable fox. By earning her trust you manage to merge your being with your cute animal and start a journey into the enchanting forest to discover the four "fragments of the seasons". Acquiring them is a prerequisite for conducting a mystical ceremony capable of releasing the narrator from the shackles of the forest and fulfilling all your secret desires. It is very likely that the plot of the story might seem confusing and the ending open to interpretation, which is certainly true up to a point. But by completing Seasons After Fall, you quickly realize that the characters and the events have a purely symbolic role. Some of the philosophical content issues that the game deals with are the inherent fear of a child that is called upon to walk through the path of adulthood, the endless cycle of life, or even the respect we owe to mother nature and the creatures that consist her. 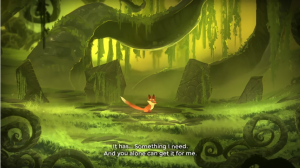 Seasons After Fall is a relaxing game in which there are no fights with opponents and therefore no parameters that can lead you to game over. All the gameplay of the game revolves around jumping on various platforms and solving puzzles of moderate difficulty, by playing with the unique mechanism of alternating the seasons. The fragment of each season gives you the ability to transform the environment around you by gaining gradual access through backtracking at all levels that make up the world of the game.

For instance, in the summer the tree branches are extended thus creating climbing platforms for you, and also you can bounce on plant buds. In winter, you can walk on frozen lakes or climb in snowballs and ice columns. In contrast, in the spring, the ice melts, resulting in increased water levels, and as a result you can water the seeds that will then become trees, which you can use to get to the highest levels. In the autumn you jump on mushrooms, while wind power stretches the branches of the trees and drives the fog away, opening the way to a specific path.

The puzzle structure is quite simple for the largest part of the game, except for one near the end, where you have to launch strings created in the environment by fireballs at knots to form four patterns, each of which represents a time of the year. If you have good memory and observation skills, you will not be particularly troubled. In the event that memory is not your strongest point, I recommend you write everything down in order to solve that puzzle. 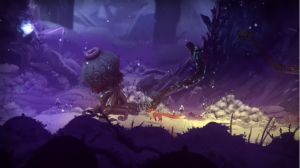 If there’s something I didn’t enjoy in Seasons After Fall is the intense backtracking in the last section, in which you have to collect some remaining items in order to hold the ceremony of the seasons. The game, unfortunately, does not have enough shortcuts between levels and additionally, the lack of clues, except for the first few hours when the narrator informs you if you turn to a wrong route, may make you wander unnecessarily disoriented for many minutes in an unknown direction, causing you frustration.

Seasons After Fall is available in PS4, Xbox One and PC on Steam for $15.

Seasons After Fall's enchanting graphics create the illusion of a moving painting created by hand with watercolors. The artwork of the game is divided into four thematic sections depending on the season. In the summer the levels are covered with lush vegetation with the green color dominating. In winter, the snowy trees decorate with their imposing presence the environment. In the spring, the rain feeds the ground that is thirsty for months. Finally, in autumn the dead leaves adorn the levels with the colors of yellow and red. Particular attention is paid to the animation of the cute fox that you are controlling. 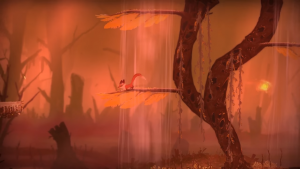 The soundtrack of the game adds to the naturalistic scenes and consists exclusively of natural stringed instruments such as acoustic guitars and violins. Touring the world of the game is accompanied by environmental noises, such as those of your steps on the dried autumn vegetation, the buzz of the fireballs and the sounds of the totems that the Guardian of Winter pitched in the woods.

Seasons After Fall is a cute game that is aimed either at young children or at adults who still feel like children. Its simplistic gameplay combined with its gorgeous graphics make it an ideal choice for you who, after a busy day at work, want to get lost for many hours in a magical world that can make you relax and get away from the accumulated anxiety. Let us know your thoughts and impressions in the comments below.

Download Seasons After Fall for PC on Steam here.

Seasons After Fall (screenshots) above and trailer (below)