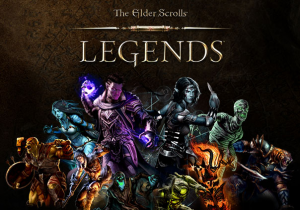 Bethesda has a long tradition in RPGs and now made the decision to test one of their most famous games, in the genre of Collectible Card Games. Thus came the creation of The Elder Scrolls: Legends. There is of course, huge competition in card games and that means that gamers will only be interested on what will attract them, and in this case Blizzard, as the champion, will always have the first say.

Its beautifully structured script unfolds in 19 chapters and faithfully follows the spirit of the Elder Scrolls games, that is, you set yourself up in its world as a simple gladiator, who, starting from scratch, reaches the point of radically shaping the history of most of the world. From a bloody arena you’ll rise by getting friends like Tyr, Swims-at-Night and Witch Laaneth. From battle to battle, you and your allies will unveil a devilish plan for the destruction of the empire and will try to prevent it.

The chapters of the script and all of the components of the decks you get are dominated by the Elder Scrolls folklore. All Tamriel races participate in the race, from the enchanting tribes of dark, wood and high elves, to the nords, the khajiit and the fallen imperials. Known creatures from your wanderings in Oblivion, Morrowind and Skyrim make their appearance (spriggan, atronach) making the experience even more amazing.

To defeat your opponents you need powerful decks full of powerful beings, objects and spells that will consist of minimum 50 and maximum 70 cards. How do you know if a deck is powerful or its general function? By finishing the story first to get the first completed decks and then testing your handcrafted decks in practice. 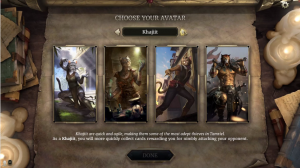 Building a deck is a time-consuming process and must be carried out very carefully, initially taking into account two very important factors, the attributes of the cards and their cost in magicka. The magicka is the mana and determines how fast a card can be played. The basic attributes are five (agility, endurance, strength, intelligence, willpower) and you can combine up to two on the same deck, garnishing your options with neutral attribute cards or rare dual attributes.

The attributes of a deck and the cost of cards in magicka, categorizes it in assassin, archer, battlemage, crusader and other exciting roles. If you build an assassin deck, for example, your army will overflow with creatures that kill quickly, diluting the enemy classes continuously and giving you the opportunity to land quick blows. As a crusader you will have an army perfect in controlling the enemy attacks, building your forces steadily until the final raid. Depending on what expresses you, the ideal deck, either aggressive, based on field control, or spells and so on, will be formed.

The battlefield is specially designed to favor any kind of strategy and tactics on your part. It is divided into two lanes, the normal and the shadow lane. The second lane covers for one round the creatures moving on it, protecting them from the attacks of the enemy army but not from the enemy spells. By switching spells, objects and creatures on the dashboard you will continuously reduce the number of enemies and enemy hit points that are listed below your avatar picture. Around it you will see five blue marks, the so-called runes. At regular intervals, as long as you hit the hit points of the enemy, the runes break by giving him the opportunity to pull a card without consuming magicka. If the card writes prophecy above, the opponent throws it on the board at the same time, with no cost. Because it is likely that breakage of the runes will give the enemy an abrupt surprise, it is of great strategic importance when you break them. 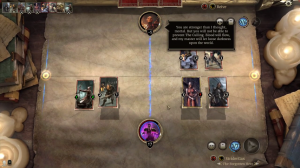 In The Elder Scrolls: Legends success is rewarded with two major resources, gold and soul gems. Your gold is needed to buy booster packs, participate in events and arenas. Soul gems allow you to buy the cards you are missing from a deck.

The game has 3 modes; The story mode welcomes you with lots of gold and soul gems until you're done. The arena mode, solo or versus, hides great rewards, but risks as well. To enter, you pay a ticket of 150 gold. Entering the arena will have you facing eight opponents and the boss. If you lose three matches, your arena closes its doors until you re-spend the required ticket. Play mode will take up most of your time. It is divided into casual and ranked. You will face players from all over the world and collect gold, booster packs and soul gems from a few wins. The difference is that in casual everyone is trying to test their decks, while in the ranked where big rewards and points are at stake, you will be faced with very skilled opponents. I recommend many casual matches until you make a deck that you handle perfectly. Defeating rival decks in play mode do not forget about everyday quests because they provide you with a lot of resources.

The Elder Scrolls: Legends is available for free on PC, mac, Android and iOS devices. 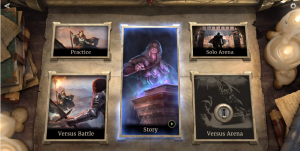 The animations are minimalistic. Sparks and lights are projected onto the screen when you use a fireball or lightning bolt card, or a sword cuts the enemy monsters when you throw a spell, chains tie them, the features of a card are quenched with silence spells and several more of your interventions in the battle have the same moderate outcome. The art style of the cards is quite beautiful and the depiction of some creatures is impressive especially when they have a magic aura. The sound effects are good and the BG music very fitting.

The Elder Scrolls: Legends comes in a highly competitive market, carrying on its back a strong name. Generally, this effort is a way of entering the The Elder Scrolls on Card games in the sense that they will find the environment somewhat familiar. In essence, the gameplay is simple, the tutorial will even help beginners of the genre, and since it is free, you have every reason to give it a try. Let us know your thoughts and impressions in the comments below.

Elder Scrolls: Legends screenshots (above) and trailer (below)

#android #ios #windows #games #review #elder scrolls legacy #mac #freemium
Comments (0)
< PREVIOUS ARTICLE
How To Create Your Own Custom Windows ISO With Drivers And Updates Included
NEXT ARTICLE >
Game Review: Seasons After Fall is a game that fills you with joy