Game Review: Challenge yourself in Rings 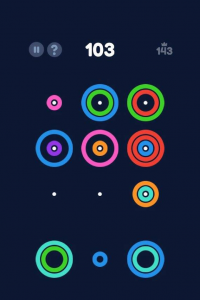 I tried Rings out of curiosity as I noticed it was featured in the Best New games in the app store and I have to admit I almost lost track of time after starting it. I don’t know if it was my need to get a higher score every time I tried or the gameplay itself that got me addicted, but the point is it turned out to be one of my favorite games of its kind. Simple in its design and gameplay, but unique in its core, it knows how to keep the player interested and focused until it is too late (literally).

In Rings the player must follow a few simple steps to achieve the highest score possible. You are given a board that consists of 9 white dots and at the bottom of the screen appear circles of different colors, sizes and can include smaller ones inside them.

Your job is to place each ring on the board by dragging them, and aim to make a line (horizontally, vertically, crosswise) or stack (it means to place rings of the same color but different size on the same dot) of same color rings to make them disappear. The more combos you make the higher the score gets. You will lose by the time the board is full with no empty slots or rings to fill. Arranging them is easy at first but as more complicated rings appear, that consist of more than one color, it will take lots of thinking and sometimes even pure luck to be able to make the right combos. Even to this point I’m not quite sure if I’m a good player or not. Sometimes I surpass my score without sweat and others my moves are these of an amateur. But that’s the magic of games like Rings. You can never be sure how far you’ll go and experience has little to do with the round that comes next.

A downside is that inevitably it is quite repetitive and it would be a very welcome addition if the developers added some sort of surprise reward for those who achieve many combos, just to spice things up and provide us with a motive to try harder.

The game comes with an ad-remover and no further IAPs are present. The ads are also not forceful or annoying so even the existing IAP is barely needed to enjoy the game at its fullest. 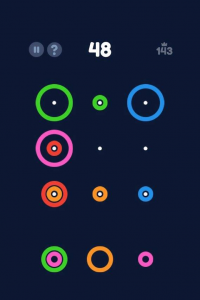 Rings is a very minimalistic game not just in terms of gameplay but also in terms of appearance. The background is a shade of dark blue and the only thing that breaks the monotony are the rings themselves. It is actually very clever how it is designed because it allows the player to focus on the rings and pay better attention to the colors they have and not be distracted by the surroundings. For a game that is based on focus, this is very important.

There is no BG music and the only sounds you hear are the rings being positioned on the board and the sound effect when you make a perfect match. Anything more would simply ruin the simple design that fits so perfectly to it.

Rings is a game that is created to keep you company for a long time and you will be able to tell if it is your cup of tea right from the beginning. If you like it, chances are you’ll play non-stop due to its addicting nature. It is a calm game that doesn’t frustrate you even after losing. Its difficulty level is progressive depending on how far you’ve gotten and it is not unfair at all. If you’ve tried it, let us know your thoughts and impressions in the comments below.

Rings thumbnails (above) and trailer (below)