We talked before about the support for Windows XP ending on April 8, less than 3 weeks from now, and the options you should consider before then: upgrading or migrating to a new OS. If you're plan is to upgrade your current PC, running XP, to a newer Windows installation, than you should have a look at the basic hardware requirements for Windows Vista, 7, 8 and, 8.1.

You can see below the minimum requirements put forward by Microsoft for their operating systems, both for 32-bit and 64-bit PCs. We did not include Editions such as Vista Home Basic or Windows 7 Starter, since these editions come with some features removed.

Some tips to consider

If Windows 8/8.1 does not appeal to you, upgrading to Windows 7 is still possible. Don't be alarmed by the mainstream support ending in January 2015, the extended support will only end in January 2020. That's 6 years from now.

If you're planning on upgrading to Windows 8 (better make it to 8.1) and you're not going to buy a new PC, you can run the official Windows 8.1 Upgrade Assistant, which will generate a compatibility report for your current hardware and will give you further options to buy, download, and install the latest OS, 8.1. The compatibility report will show you which apps and devices are compatible with Win 8/8.1 and which aspects you need to review before proceeding further. 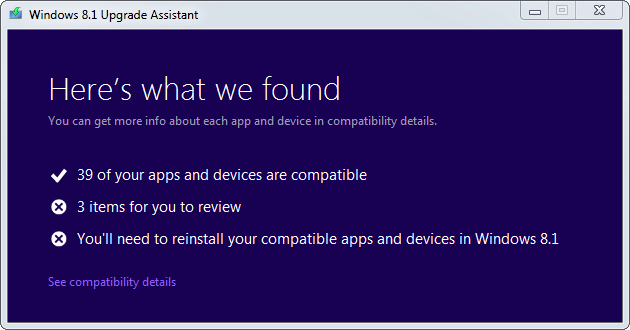