Home
Articles
Assange and Snowden Speak at SxSW: So True, So Ominous

Assange and Snowden Speak at SxSW: So True, So Ominous

SXSW interactive usually goes by the title “Technology is Awesome!” The incredibly crowded Festival celebrates the powers and potential created by chips and circuits. However, this year the mood is not so optimistic.

Big data, social media and implantable and injectable computing have offered more than enough of optimistic futurism with their app-governed toothbrushes and phone calls from airplanes. But the most resonating talks focused on the ways technology has failed us.

Two men who could not attend SXSW in person, and have no hope of coming anywhere near the United States anytime soon – WikiLeaks founder Julian Assange and NSA whistleblower Edward Snowden – have spoke to the crowd via Google hangouts and Skype about privacy, security and mass surveillance. 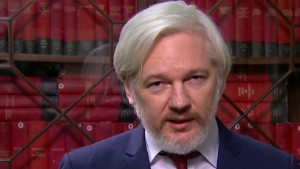 Assange spoke from the Ecuadorian embassy, his place of residence since June 2012, the only place that gave him shelter from the imminent arrest by the British police. He calls it “a bit like prison,” and the connection was repeatedly interrupted, which resulted in Assange’s monologue, since the audience could not ask questions.

“How is it that the Internet that everyone looked upon as perhaps the greatest tool of human emancipation ever invented had been co-opted to be the greatest instrument of state surveillance ever seen?”

Assange put the blame on the lack of accountability of both government in Washington and tech companies in the Silicon Valley. “The ability to surveil everyone on the planet is almost there and arguably will be there in the next couple of years,” he said. He suggested the US NSA has become a “rogue agency” with too much of the firepower that would backfire at Pres. Obama if he were to disbound this service.

He said the groups like WikiLeaks were freedom fighters in the age of mass surveillance and government occupation of citizens’ private online space. “Now that the Internet has merged with human society, the laws of human society should apply to the Internet.”

He also explains that because international governments keep too much information obscured and secret, citizens don’t understand what is actually happening.

“We are all actually living in the world that we don’t understand. It is a fictitious representation of the world, an illusion, in which the true nature of government power structures is obscured. We are walking around constantly in this fog.”

He was also quite harsh about Facebook, Google and the likes for collecting user data.

“What is going on is an unprecedented theft of wealth from the majority of the population by those who already have a lot of power. They are doing that in part by stealing information from all of us. Knowledge is power, and so they are accumulating a lot of power.”

Assange was also disturbed about Android devices that account for more than 1 billion gadgets worldwide. “That’s a big problem that a single group is able to capture that much information about people. You are all the product.” 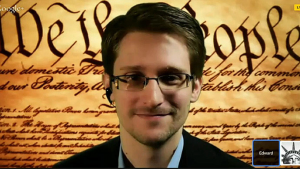 Edward Snowden made his own virtual appearance via Google Hangouts on Monday. The streaming was placed through seven proxy servers to hide his location in Moscow, and it could manage only one video frame per second while his voice sounded as if he were in a metal jar. He talked about technology and politics, and gave advice as to how regular users can protect themselves from snooping.

Snowden urged tech companies to make all data encrypted, and all communication secure by default. He said today’s encryption tools work, but they are too difficult for the regular users to grasp. He also cited how much trouble it took for the journalist Glenn Greenwald to set up PGP, Pretty Good Privacy, to communicate with Snowden securely.

“The way we interact with it [encryption technology] now is no good. If you have to go three menus deep, users are not going to use it. We want secure services that aren’t opt in.”

When asked by the seminar attendee how a regular user can protect himself online, he said these technologies are “really complicated subject matter today.” However, he suggested some methods that included encrypting your network, encrypting the hard drive and using the Secure browser Tor. He also complained while encrypting computer storage in OS X is done quite easily, doing the same in Windows is not so easy while setting up Tor relays is not simple, either.

Snowden also had some harsh words for the Washington and the most prominent Silicon Valley representatives, saying they had gone dangerously astray attacking the informational security.

“We spent all this money, all this time, hacking into Google and Facebook back ends. What did we get out of it? We got nothing.” All governmental branches have failed to stop these exploits.

Earlier US Republican Mike Pompeo issued an open letter to the SXSW organizers requesting they cancel their Snowden seminar, arguing that Snowden was a traitor “with only apparent qualification is his willingness to steal from his own government, and then flee to the beacon of First Amendment freedoms, the Russia of Vladimir Putin.”

As a counter argument, Snowden concluded his Hangouts session explaining why he chose to leak the NSA surveillance in the first place.