Home
Articles
Mr Jump: Another dude in a world of rectangles and triangles?

Mr Jump: Another dude in a world of rectangles and triangles? 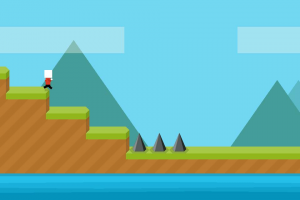 Mr Jump by 1Button SARL (Freemium) is the latest “Editor’s Choice” on the app store so even though it is the typical one-touch action type of game, I couldn’t ignore it, and I can say with confidence that I’m glad I didn’t.

Yes, all you have to do is tap to jump, and yes we’ve seen countless such games, Crossy Road (read our Download3k review here) being one the most famous and successful ones of its kind. But that doesn’t mean you can’t enjoy Mr Jump or any new game for that matter. Besides, it’s too difficult now for developers to come up with something extremely unique that doesn’t have something from the past to be compared to.

But let's get back to the review of Mr Jump:

The plot is simple: You control Mr Jump, a squared character with a red top and black pants and your job is to help him jump his way through ingenious and tricky levels. 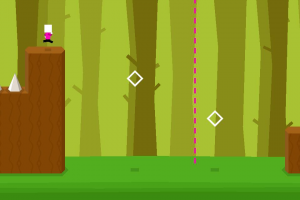 As mentioned above all you have to do is tap to jump and tap and hold to jump further. Running is automatic so it all comes down to having quick reflexes in order to jump in time to avoid the spikes and obstacles that appear in your way.

For now the game comes with 12 different, in both difficulty and environment, levels. Each one requires a different approach and tactic from the player.

The first level is more like an introductory level in which you have to avoid spikes and jump above gaps but in later levels things become more interesting as the player can now collect power ups, such as double jumping, or being able to jump until you land again, or even transport between locations.

The obstacles and platforms are cleverly positioned and by that I mean that while the player will find it hard to avoid some of them, they’re by no means impossible to clear.

If you lose you start the level over and while this is the most frustrating aspect of such games, I sort of see the reason it happens on Mr Jump as the levels are not too long, so if you complete let's say 80% of the level and then you lose and you start from where you lost then you will easily reach the finishing line. This might seem like a nice idea but it would have make the game boring. 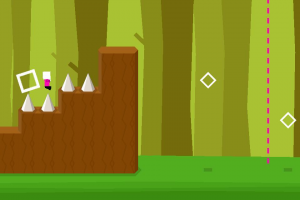 Also, the levels are not randomly generated so every time you start over you have to face the same obstacles in the same positions. Learning by memorizing what comes next helps you clear the level easier.

Of course, the downside of re-playing the exact same levels is that it could lose its challenging theme and become repetitive because you know what to expect next but I wouldn’t complain about it in Mr Jump.

The graphics are simple yet lovely with crystal-clear colors. The 2D 8-bit designs are cute and together with the calming and fun music make it easier to not get too annoyed when you lose.

Mr Jump doesn’t offer something new to the genre and yet it manages to win your over with its simplicity, tough but fair gameplay, and the absence of IAP (except of course the option of unlocking a level by paying, in case you're too impatient to unlock it the normal way, which is by completing the previous level). It keeps that balance between enjoyment and frustration and that is what brings the player back to the game again and again. Sooner or later you’ll clear the levels and the pleasure that derives from that will erase all previous frustrations.

Give it a try and test your precision and limits in another one-touch game that you will either delete a few loses after or keep in your collection for a long time.