"Why did the Chicken cross the road?

Why did the Pigeon leave THAT there?

Why did Specimen 115 abduct that cow?

Why did Unihorse eat all that candy?"

There are only a few of the questions that have been haunting us for years… is it time, perhaps, to finally find the answers? Will Crossy Road enlighten us on these serious matters? Probably not. But this game will definitely test your patience and anger limits.

Crossy Road is a game that you can’t just stop playing. You don’t control it, it controls you. Trust me, your dignity won’t let you give up once you start. So proceed with caution.

After the huge success that was Flappy Bird, a few similar type of games made their appearance, some more successful than others. What they mostly had in common was the flying. All of these games took place in the sky just like Flappy Bird. Crossy Road takes on a different approach and thus takes place in the ground with the obstacles being mainly vehicles.

Let’s take a closer look to the game itself. In Crossy Road the player is controlling a chicken (and not only) which is trying to cross the road. But not just any road. This road is full of highways, railroads and rivers and you must help the chicken get as far as possible, and while that sound easy, trust me when I say it’s not. I know what you’re thinking; you’ll just wait to cross the road when it’s empty. That’s what I thought too, but guess what… if you don’t cross in a few seconds an eagle will fly towards your character and grab them to infinity. So, you can’t slow down no matter what! I’m sure your character will meet the eagle one way or the other, as it’ll get hit by oncoming trucks, cars, trains or simply fall into the river. 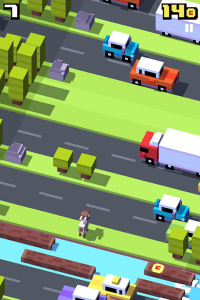 The controls are very easy as all you have to do is tap to move forward, and swipe to go any direction left, and right. You will be needing left and right controls not only to avoid the vehicles but to also collect coins that lie on the ground in different places. But keep in mind that swiping doesn’t move the characters as fast as tapping does, so use it only when necessary.

There's also a feature that takes a Polaroid-like photo of hilarious impacts, like when your character becomes one with a truck. You can share or save that photo to your library but if you don’t, it disappears until the next time a photo is taken. So unfortunately these funny photos are not automatically stored in-game.

Also, the action of moving is very well done and the sound it’s accompanied with, creates a feeling of joy. But nothing compares with the feeling of getting hit. You can actually feel the hit and the laughs it causes kind of make up for the frustration of losing.

Another good feature of the game is that it can be played both vertically and horizontally, which is extremely helpful as you can choose the orientation without losing quality. Unfortunately not many games support that function so it’s always a nice surprise when I find I game that includes that feature.

As I mentioned above, the chicken is not the only character available. While playing you will be awarded coins (apart from the game itself you can earn coins by choosing to watch a video add) and with them you can win gifts in the lottery by spending 100 coins. To get new characters you use the lottery and get a character as present. The characters have each their unique sound, way of walking and some of them even have special moves, such as the Mad Wizard who can blow up trees. Of course it’s not easy to win in the lottery such special characters but it’s not impossible either. In fact, the game is extremely fair when it comes to IAP. You can do anything in the game without spending a cent. Unless you want to buy a character, which in no way affects the game except probably giving you a special skill, you’re not missing anything if you choose to play without paying. The cost of characters if you want to buy through IAP range from $0.99 to $2.99 for the more special ones.

Apart from all that, there isn’t a timer to stop you from retrying after you’ve lost and you can start as many times as you wish. There's even an option called "conserve battery" that if activated reduces the framerate, so your battery won’t get drained. 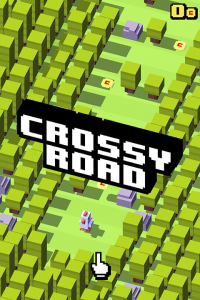 Also, if you have a Game Center account you’ll see friends' scores show up while playing which is a really lovely feature in the game.

The graphics are amazing and I’m a sucker for pixel visuals. The colors are vibrant and lively and the music and sound effects (especially during hits) are splendid and match the game’s mood completely.

Crossy Road is a game that although is simple, it manages to captivate you and make you want to come back for more. It’s obvious that the developers have put themselves into it and gave us the best result not only in terms of gameplay and graphics but also as a freemium. This game is very player-friendly and in no occasion will you feel pressured by the IAP. It’s a shame that not many other freemium with IAP follow that example. I believe that you will be hooked on this game just like I and hundreds of others have. There’s basically nothing objectively negative to say about this game. My advice is to give it a chance, especially if you’ve played flappy bird in the past. In my humble opinion Crossy Road is far more enjoyable than FB was. All that’s left is for you to try it and decide for yourself if it fits your preferences or not.