Facebook is extending their reach once again by improving how third party apps and businesses can be integrated into the latest generation of their Facebook Messaging app. Information about the changes, the release of the Facebook SDKv4.0 for Android and iOS, plus the Graph API v2.3 was announced at the F8 Developer Conference in San Francisco earlier this week. 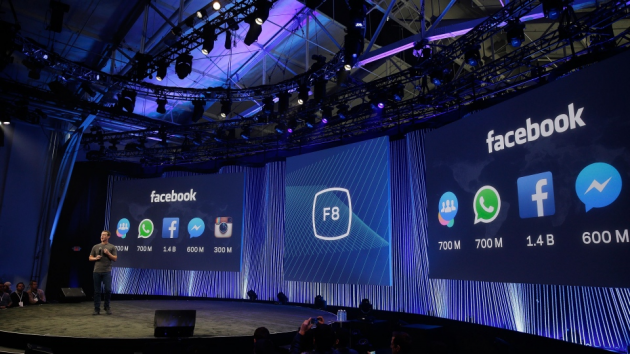 Facebook are changing their Messenger app from just messages to being a platform that app developers and other businesses will be able to benefit from.

App developers will be able to add the new Messenger platform directly into their own apps without needing to add much additional code to do so. Chat apps and other types of apps will be able to sent messages within their own app which will show up with Facebook Messenger. The messages can be text-based, an image, animated GIFs, videos and other types of content. This type of functionality was already available from other apps like the WeChat app from China, but the new features go farther than what WeChat currently offers. 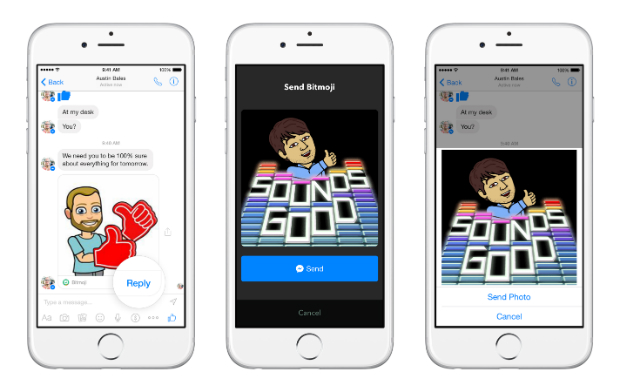 Facebook has been working with 40 developers already to have this feature implemented in their third party apps. The apps that already have the Facebook Messenger chat integration include Bitmoji, Dubsmash, ESPN, Imgur, JibJab, and the Weather Channel. Now the Facebook Messenger platform is now thrown open to anyone who can develop an app. 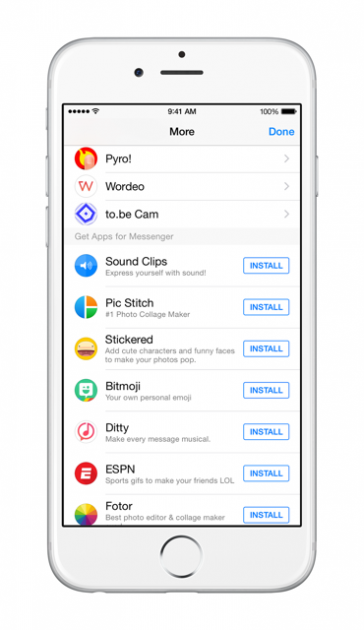 Facebook Connect partners are signing up to share comments between sites. So if you send a comment to a page on The Huffington Post, add a sports-related comment on Fox Sports, talk about the latest news on BuzzFeed or add a short note on EliteDaily, your comment will also show up under the story when it displays in Facebook.

When making a purchase online at a cooperating e-store, the user will be able to connect their Facebook account to the e-store account. This way, the e-store can send a message directly to their customer's Facebook Messenger account to confirm when the order has been shipped to them or when a returned package has been received at their warehouse. It will also be possible to communicate with the customer service team for the e-store directly within the Facebook Messenger app. This will move some typically email-based communicationa over to Facebook's realm instead.

Spherical Videos Soon To Be Supported

In the Facebook news feed and direct to the Facebook owner's Oculus VR headset, 360-degree video support will soon be added to Facebook. The perspective that the user can see the video will be manipulated by tapping the video and dragging it in a different direction to rotate it like with a globe on a stand. YouTube is also supporting this developing format too.

Taking a leaf out of YouTube's playbook, Facebook are changing uploaded videos so that they can also be re-posted on other web sites. Previously, video content shared on a Facebook page could only be linked to. In the future, videos will be post-able on other web sites, where they can be viewed there, while being directly hosted by Facebook.

Social Plugins Get A Refreshed

Social plugins get improved designs and a different way to interact with them. The Embedded Video Player for third party video playback mentioned in the previous paragraph will be just one of the changes with the refreshed/new social plugins available.

There is a free dashboard which will let developers view who is using their apps, where they are visiting from and other useful information. This includes all usage for a Facebook user collated across multiple devices. This will help developers add new features and come up with new app development ideas in the future for apps included in the Facebook site. 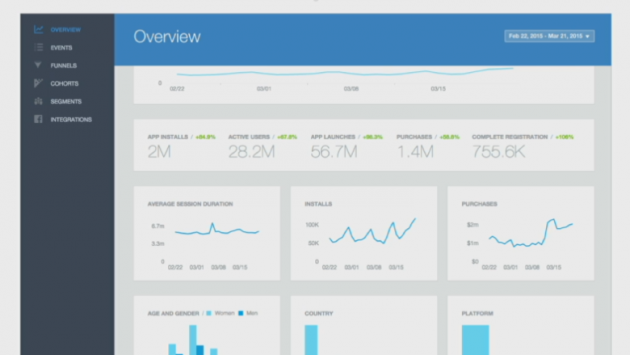 Mobile app developers can now include the LiveRail monetization platform to offer better display ads and video ads to app users. Publishers will be able to improve the ad delivery by using targeted advertising to the right audience for higher click-thru rates by showing more applicable ads to app users.

Facebook Takes A Small Step Into Internet of Things

Not to be left out in the cold when the internet gets wired into seemingly every device in the home, the Facebook account will be able to work with apps that can control a myriad devices at home. There has been no direct announcement about how Facebook will connect to the Internet of Things devices themselves, but it was announced at the F8 Developer Conference that they're actively working on it.

The first was Device Year Class which helps to properly identify the phone that is being used when accessing a third party app. The idea behind this is that a developer can alter the app GUI to make it more suitable for older devices when they're detected.

The Network Connection Class is intended to help developers who would benefit from knowing the connection speed that the user has. For instance, this way they can display a warning before starting an update download or in-app purchase when the internet speed is too low to complete the download, rather than have the update time-out.

The third Android tool is the Fresco. This is an image library for Android apps. It will help to cache images more efficiently and display placeholders until the image is ready to display inside the app GUI.

Stay tuned for more from Facebook in the coming months.

#windows #android #ios #facebook #best apps #messaging
Comments (0)
< PREVIOUS ARTICLE
Mr Jump: Another dude in a world of rectangles and triangles?
NEXT ARTICLE >
How to change a network's name in Windows 8 or 10