Patchmania: A Puzzle About Bunny Revenge! 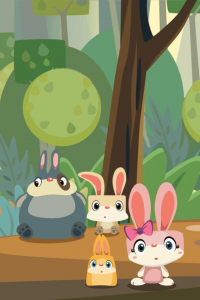 I know what the game’s title and icon make many of you think “Too cute to be interesting and challenging”. But a game doesn’t need to have a cool title and serious characters to possess these qualities and Patchmania is a good example of that.

Patchmania by Little Details LLC has recently been released on iTunes and for the past 2 days it has become my new puzzle game obsession. Read the review below and I’m sure it will become yours too.

The plot is cute and touching at the same time. The game starts with a cartoon cinematic that shows our main character, the bunny Calvin playing with his other forest friends when a bulldozer appears and starts destroying everything in its way. Fast forward and we see that where it used to be the forest and home of so many animals, now exists a big farm. Now, it’s the turn of Calvin and other bunnies to get their revenge. Lead the brave Calvin, and his adorable furry friends, on a rampage through Pitchfork Farms. 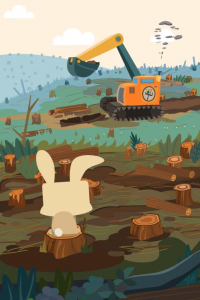 While the rules are fairly simple and the goal clear, achieving it is hard and gets harder as you complete one level after the other. Your objective is to eat Farmer Lester’s crops, and put him out of business by drawing paths with your finger through the vegetables (carrots, lettuces etc.).

There are over 600 levels available, all separated into chapters. Each chapters takes you to another adventure, in another part of the farm. The number of levels that exist in each chapter can vary in numbers, e.g. chapter one “Out of the Woods” has a total of 25 levels, while the second chapter “Into the Barn” comes with more than 70 levels.

What’s interesting is that you don’t have to clear a level to move on to the next (this works for the chapter you’re on and to unlocked chapters only), but you have the option to play each level randomly, e.g. going from level 5 to 20.

However, in order to gather enough stars to unlock a new chapter you’ll have to play all of them and try to achieve an excellent score, which rewards you with 3 stars. Each chapter requires more stars to unlock and you’ll find it hard to get a perfect score all the time. For that reason you can replay the level as many times as you wish and change your score for the better.

Now, allow me explain the mechanics of the game:

To clear a level you have to eat the crops by drawing a path that leads to the rabbit hole with your finger. Sounds easy but it’s not because you must draw chains of the food without breaks. That means you can’t jump to the next carrot (or whatever crop) if there’s a gap between it and the previous one. If you create a chain that includes all food then you win 3 stars, if you leave out one crop then you get 2 stars and if you leave out 2 then you get only one star. Leaving more food out forces you to play again. 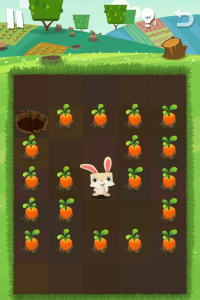 Because the chain of food can be long you can tap on the rabbit hole after you draw the chain and the bunny will jump instantly to the hole. Each bunny needs to eat a different food and in many levels you’ll have more than one rabbit and you’ll have to clear more than one chains, which makes the game more challenging.

The difficulty level of each chapter varies from easy to medium and hard. Prepare for lots of frustration and swearing as you move forward.

Except the bunny food that is special to each bunny, there are also mushrooms that can be eaten by any bunny so don’t be afraid to make them part of the chain!

Another interesting feature are the tunnels that can transport bunnies to a different part of the field, and last but not least we have the lightbulb that you can tap to get a hint if the level is too hard to figure out. Keep in mind though that you get only 3 hints per chapter so use them wisely, or you can buy more through IAP.

Which brings us to the infamous IAP feature. Except the hints that you can buy, you can also pay to unlock chapters if you’re not patient enough to gather the required stars. These two IAP features, I find normal, but what bothered me is that there are bonus chapters that can only be unlocked via IAP with no other alternative. I guess the fact that they are bonus and not “main story” chapters makes it easier to let go. 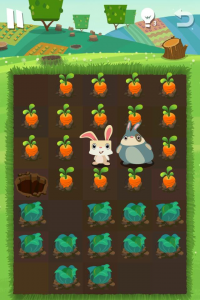 Probably one of the best 2D graphics in puzzle games. The animations are lovely and it’s easy to see the effort the developers put to create perfect cinematics and cute designs. The music is cute and calming and helps in moments of frustration.

Controls are smooth, simple and fun and I didn’t notice any lagging or delay while drawing chains.

Patchmania is an amazing game that doesn’t only offer a great puzzle experience but a complete game experience with a solid (even in its cutesy form) plot and gorgeous designs. It also provides the player with a fun mental exercise that keeps your brain sharp and increases your perception. Give it a try and you won’t regret it.