Home
Articles
The Best Apps For Voice Commands In Android

The Best Apps For Voice Commands In Android

Personal virtual assistants are applications which allow us to perform various tasks using voice commands, reducing the need for typing. In this article we’ll present the best Android apps for voice commands.

Although voice-controlled devices was a major subject for dozens of science fiction movies in the past decades, the first digital assistant was created quite recently.

In 2011, Apple introduced Siri for iOS, one of the most complete and well-known applications for voice commands so far. The main difference of Siri with other similar applications is that it has several advanced features.

Unlike similar applications for Android (no, don't get confused, Siri is not available for Android, we're just making a comparison), we can ask Siri to carry out quite complex tasks, such as memorizing our relationship with a contact (e.g. mother, father, friend, etc.), performing advanced searches and replying to multiple types of questions.

If you want to know more about Siri and its range of capabilities, you can visit the app’s website here or watch some of the available videos on YouTube.

Next, we’ll go through Siri’s best alternatives for Android devices.

Google Now is one of the most common applications for voice commands, and is preinstalled on most Android devices. The main advantage of this app is that it supports almost all languages. However, even though this is a significant advantage over other applications in this article, we cannot consider it a complete personal assistant.

The main reason for this is that Google Now is completely dependent on Google apps. For example, if we give the command "Play Music", the app will require the installation of Google Play Music, if it’s not already present in our device, regardless of whether we have another media player or not.

Moreover, Google Now is not able to launch all the applications in our device. While it supports a large number of applications, it can’t start every app.

In general, Google Now may be the perfect choice for online searches and interaction between Google applications. But if our main goal is to manage applications and files, it would be better to choose one of the apps presented below.

Although the application’s name is not particularly attractive, Assistant is one of the best applications for voice commands. With an average rating of 4.6/5.0, and more than 10 million downloads, it is the most popular choice in its category.

Unlike other personal assistants, the Assistant requires no specific keywords or procedures to hear you. To perform a command, you just have to ask for it naturally. Also, the words you use and their syntax don't really matter when using the app, as long as there is a meaning in your phrase. In case you don’t want to give voice commands, you can type a phrase via the keyboard. 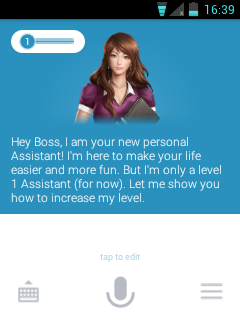 As for the application’s capabilities, they are countless. Through a network connection, the Assistant is able to perform any task you want. For example, you can manage any application in the device, or install a new one. Also, you have the ability to get informed about anything, such as the news or weather, seek encyclopedic knowledge and even make translations of text in any language. 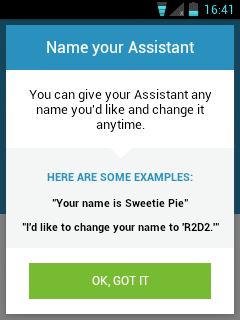 These tasks might sound very simple, but they are just a few examples. Depending on how much you use the application, you can discover much more complex tasks and features. 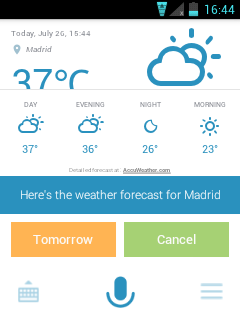 Moreover, you can view the "lessons" offered by the application, and get more familiar with the way it works. These courses have the form of a game, since there is a point system which unlocks the next lessons. 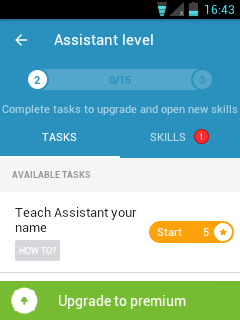 Finally, with the paid version of the app, you can activate the application without having to launch it first, as well as add your own tasks via voice commands.

Even though it has significantly fewer downloads, Indigo is an equally good choice. Although it has some deficiencies compared to its competitor, Indigo incorporates some unique features, as you will find out.

The first time that you use the app you will be asked to create an account, even though the reason why it’s required is not clear- it’s probably used to store our settings. After creating an account, you will see the app’s main screen. From there, you can give your commands, either orally or by typing.

So, by asking "What can you do", a list with all of the app’s features and supported commands will be displayed. The screenshots below show a part of this list: 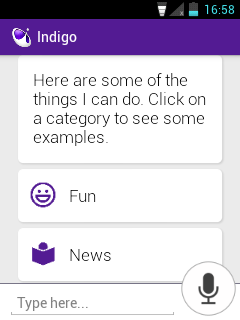 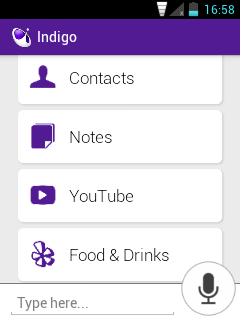 A really great feature in Indigo is that it can take initiatives. For example, the first time that it tracks your location, it will ask you if this is your city of residence. This way, you can have access to information about the city you live in without having to mention its name every time. 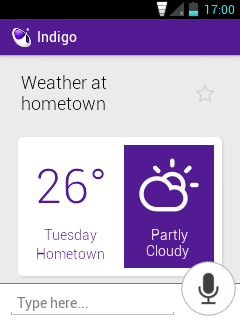 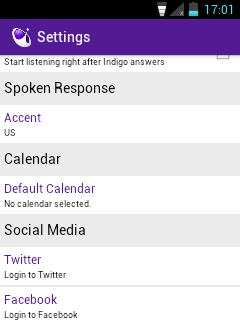 The main drawback of this app is its not-so-natural way of speaking. Even though it is understandable, it is not as realistic as Assistant’s.

AIVC is the second most popular application in this category, but it is third in this article due to some disadvantages regarding the way of presenting certain information.

Regarding its functionality, AIVC has a great list of features equal to those of its competitors. From the Help menu you can see some examples for all the commands that you can use. 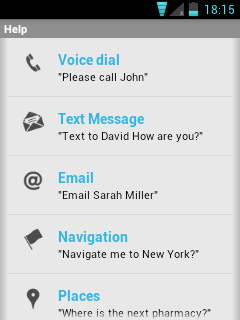 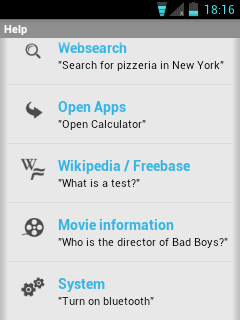 In most tasks, the results are displayed within the application, similarly to all applications of this kind. For example, the weather is displayed as an image on the main screen, and a location is displayed in a popup window. 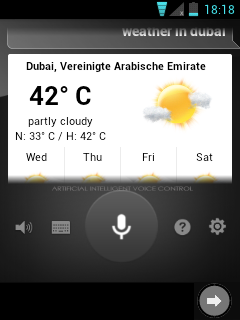 On the other hand, answers to encyclopedic questions or translations are returned in Google’s environment, which is, however, displayed within the application, and not within a browser. This has no practical consequences, but degrades the aesthetic part of the app. 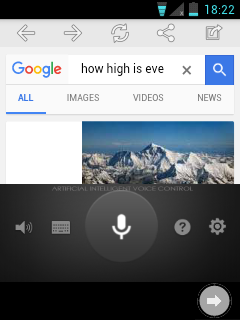 Finally, AIVC recognizes at a very satisfying level your voice, as long as you speak clearly. In case you're facing a problem, you can use the keyboard to type commands.

Although Robin is still under development, it is a very good choice. As it is normal for every beta version of an app, Robin also has a few minor issues. For this reason, the app’s developer asks us to contact him and report any problems we experience while using the app. 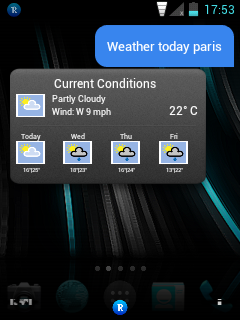 What makes Robin stand out is the fact that it uses its own window, but is running on top of the window that is currently active. Additionally, the recognition system of our commands is not as good as in the previous three apps, but it is quite satisfactory, with normal speech volume. Furthermore, Robin can provide a list of all the available services, which were tested successfully. 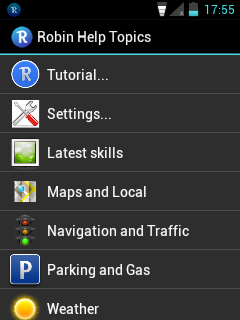 Regardless of the fact that it has significantly fewer services from the previous apps, Robin is a fine choice for those who are interested in performing basic tasks.

Due to hardware limitations (i.e. useless, 3-year-old broken LG L3 devices) some apps couldn’t be installed and tested, but they should be mentioned due to their popularity:

Dragon has the second highest rating in this article, with 4.5/5 stars, and for a good reason, since it includes all the services required from the average user. For example, it gives you the ability to send messages, manage your calendar and search the web.

Even though HOUND seems to be quite a powerful and complete app, it has many negative comments, and although comments are not always valid, it is the only source of information in this case.

Cortana was created by Microsoft and is available for Android and Windows devices. It has all the basic functions provided by other similar applications, plus some special features.

Cortana has a very good speech recognition system, and can carry out many tasks, but the main feature that makes it stand out is its ability to sync the smartphone with a Windows 10 computer (if Cortana is enabled there too). This way, whenever you miss a call, a notification is displayed on the computer. Then, from the computer, you can either respond with a message or simply ignore the call.

In this category we include applications which didn’t give us the expected results.

Despite the fact that Jarvis is not lacking any features that it should have, it has a low quality speech recognition system. It confused many times words that don’t even sound similar, such as "Everest" with "lyrics". This problem can be quite annoying and lowers the quality of the application. 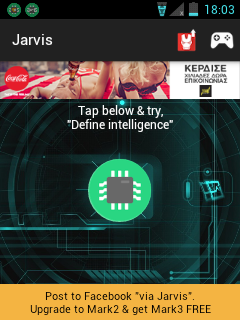 ANDY has the same problem with Jarvis, but in a much smaller degree. But even though the voice recognition system works properly, it is often unable to understand our command precisely. For example, it mistook the phrase "What is the height of Everest" with "What the hell".

To sum up, voice command apps may seem a very useful tool to users who will be able to overcome the embarrassment of talking to their device, and they can really save us some time and make our daily lives just a tiny bit easier.