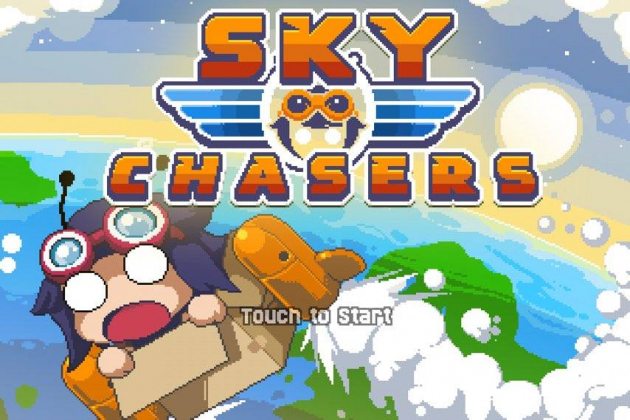 Retro games are my guilty pleasure. I admit it. I just can’t ignore most of these games when I see a new one making an appearance on the App Store. Same thing happened when I stumbled upon this little gem called Sky Chasers. A quick look at its trailer and that was it, I was sold. Both the story, gameplay and of course its graphics offer a great result that is sure to please all retro games’ fans and not only. It is also free which certainly is a good reason to try it out without fearing of regretting it. 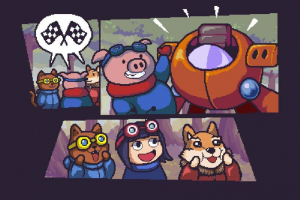 Our hero is a little kid with antennas like a bug’s in a magical universe, who, impressed by the flying machine of one of his friends, an anthropomorphic pig (most characters are like that), decides to build one himself. His flying machine however, is made by a cardboard box and as a result his friends laugh at it. Now it’s up to you to help the little hero prove to everyone that he is a true sky chaser and control his flying machine in beautiful environments and avoid deadly creatures that want to ruin your journey to the sky. Are you up for the challenge?

After introducing us to the story with comic panels, the game begins immediately. Our cute hero is in what seems to be his underground home and inside the cardboard. All you have to do to start playing (or better, flying) is to tap left or right depending on the direction you want to take, and the jet-powered cardboard will start flying. These are all the controls the game includes but it’s not an easy task to control the flying cardboard because precise movements are required to avoid collisions and to collect as many coins and diamonds as possible.

As soon as you get the grip of it, the level starts getting more difficult, with enemies such as living fruits and spiders appearing to prevent you from moving forward. You can’t fight them at first, as you’ll have no weapons, so your whole concern is to avoid touching them. Staying still is not the best option because it means you’ll start falling so keep moving slowly while paying attention to the enemies’ moving routine and escape them at the right moment. 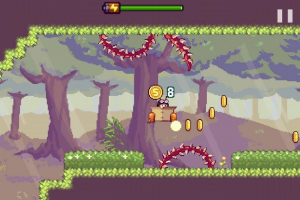 Here and there are checkpoints where you land and are asked to either watch an ad, or pay 25 coins to activate the checkpoint. It’s a fair system and I have used both options without feeling cheated. Collecting coins is rather easy and they’re practically everywhere so spending a few for checkpoints is no big deal. The game also provides some special levels where you can collect as many coins as possible before the time runs out. These bonus coins levels are really fun because you have to act fast, contrary to what you do in the main game. When you collect enough coins you can also get a new ship and more fuel for it through a lottery machine, similar to Crossy Road. There are many unique ones to fly on, and the fuel gets better with each new unlock.

Speaking of fuel, at the top center of your screen is your energy bar where you can see how much fuel you have. You can refuel to the checkpoint stations and then continue on your adventure. When you progress enough you be able to use weapons too against enemies, by swiping down to drop bombs or by swiping left and right to fire ammo. It will be a bit iffy at first (at least that how I felt), but you will get used to it after a while. 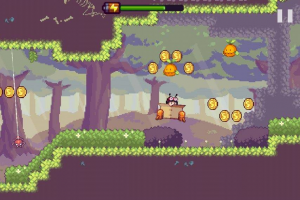 As I mentioned above, coins are important for activating checkpoints and unlocking new ships. The game also offers you the option to have free checkpoints by spending $2.99. This takes rid of the ads you otherwise need to watch to save your progress (if you don’t send coins, that is). However, the ads that you need to watch if you want to continue from where you lost and there is no option to prevent that from happening. Although they are helpful, in the sense that watching them gives you one more chance, they can get pretty annoying, similar to all games that use them. But that a small price to pay considering the benefits. Other than the ads removal and the free checkpoints which are all in one package, there are no other IAPs in Sky Chasers. Thus I can confidently say that the monetization system here is fair and not forceful or preventing you from advancing in the game. 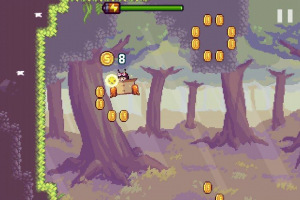 Look-wise Sky Chasers is absolutely fantastic. Of course I could be biased due to my infatuation with retro style games, but the game looks great nonetheless. The 2D pixelated graphics are very detailed and the designs are adorable. Both the hero and even the enemies look cute. The environments are really well made and I love the uniqueness of each world (there are two forests and one snow mountain). The colors are also bright and lively and together with a fitting BG music provide a great balance between the gameplay and overall appearance.

For a cave flyer, Sky Chasers does a really good job and manages to capture the interest of the player right from the start. The only thing that seems unfair is that it can get quite difficult at times to pass through caves without colliding. Other than that, it is a lovely game that offers plenty of enjoyment. It has simple controls, amazing graphics, lots of ships to unlock, and a cute story to go with it. It is definitely worth trying out. Let us know your thoughts on the comments below!

Sky Chasers screenshots (above) and trailer (below)