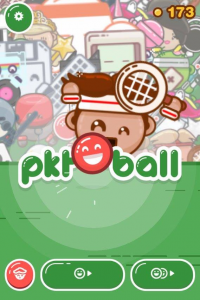 I don’t think I have reviewed a sports game in the past (endless runners don’t count as sports games for obvious reasons), but something about PKTBALL  (pronounced as Pocketball) made me want to try it out. The fact the developers are the same people who gave us the incredible Hopiko not so long ago, certainly played a huge part in my decision, and I’m happy to say that I made the right choice trusting my instinct. Unlike Hopiko, PKTBALL jumped on the freemium wagon thus making it far more accessible and attractive for the casual player. For a sports game, it certainly does well in keeping you interested and leaves no room for boredom as a result of the excitement and the fast pace of each game, which raises the adrenaline in high levels.

PKTBALL is the love child of Tennis and Pong. It contains the basics of both games and it works great. Since it is basically an endless game where you play against an opponent (AI or real) aiming for a high score, there is no actual plot to introduce you to. It is a game that challenges your reflexes and tests the limits of how fast you can act in a most entertaining and fun way.

The game is easy in terms of rules as all you’re required to do is to keep the ball moving and trying to score against your opponent. The controls are also simple and your actions are limited to tapping and swiping towards the ball’s direction. You slide over the ball and release to hit it. Sounds simple, but simple doesn’t go hand in hand with easy. And PKTBALL is definitely not the kind of game you can play if you’re not 100% dedicated to every match. 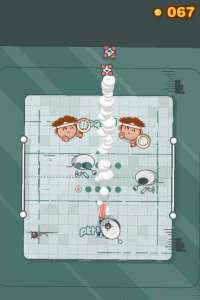 The ball gains speed progressively the more hits it receives and sometimes it gets hard to even follow its route despite seeing where the opponent will strike from. But this also makes the game far more intriguing and exciting. During the match power-ups will appear on one side of the arena and you’ll have to aim and hit the ball towards them to collect them. There are plenty of them to add some flavor to a match, e.g. Star ball or the hilarious Fishball. This adds one more objective to the game to spice things up. The fastest you react to the oncoming ball the more the speed will increase, so managing your speed can help you control both the angle and the speed at which it will go. There are also extra balls for you to grab and I love that they appear in the form of smiley faces which I found really cute and clever. If you lose you are given sometimes the chance to get an extra ball by watching an ad but you have to tap on the ad fast because it has a timer and it disappears really quickly. I haven’t seen something similar happen in other freemiums that use ads for the same purpose.

The more you practice the easier it will get to hit the ball in time but mastering the controls is a difficult task which takes long to achieve. I, for one, haven’t managed it yet. There is also a multiplayer option where you can play with up to 4 people including yourself and the interesting thing is that you’ll all be sharing the same device. It’s not done from distance like other multiplayers, so if you plan to have a match with friends, make sure your screen is large enough. With each match you earn coins as a reward (every few hours you are also given a free gift which contains coins) and if you have enough of them you can go to the PKTGRABBER  mini-game and get yourself a new character. This is also something you really need to be careful and precise with because it is basically a claw machine where you need to control the hook to grab a new character and bring it to the hole to be able to get it. You get 3 tries to grab one. It is hard but worth it when you finally grab a new character. 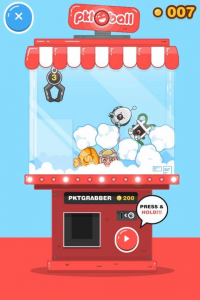 While the game itself is free as a whole, you have to pay in order to purchase various characters. A different character means different arena and different music, but the rules remain the same. No special powers unique only to each character are introduced.  Each character costs $ 0.99 and there is a large variety to choose from. As we mentioned above, you can get a random character by spending coins on a claw machine, but if there is a specific one(s) you want to have then buying them through the IAP is a fair and cheap option. Other than that, everything else is completely free. PKTBALL’s is a good example of IAPs done right.

Visually PKTBALL looks beautiful, with a wide variety of crystal-clear, smooth colors, thanks to the many characters that each has its own theme. The 2D graphics are really well-made and the designs are very cute and anime-like. I’m also amazed at how unique every character’s theme is and I can only imagine how much work has been put into creating them and how much care they have been handled with. Equally amazing is the BG music, as it changes depending on the character. Playful and suspenseful are the words I can describe the music with.

All in all, PKTBALL is a lovely and challenging endless arcade, as to be expected by Laser Dog. It can get a bit frustrating especially if you’re still a new player because more times than not, you’ll lose the game. But when you score, it is so fulfilling that you can forget about all the previous loses. It’s fast, exciting and certainly worth your time. Give it a try and you won’t regret it. Let us know your thoughts on the comments below.

PKTBALL screenshots (above) and trailer (below)