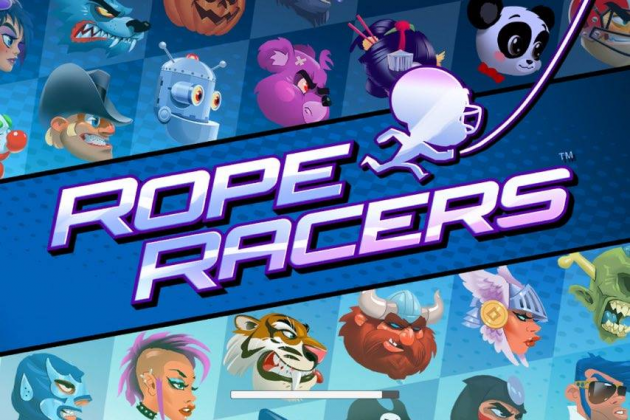 Multiplayer games have never been my thing. Whenever I could, I always avoided them- be it on smartphones or on PC. Whenever I did play them, it was always with friends and it was mostly for LoL matches or Hearthstone (and a bit of WoW recently). It’s not the multiplayer element itself that I don’t like; in fact I think it’s awesome, but I don’t feel comfortable playing with total strangers. When it comes to mobile gaming, things are simpler as multiplayer in them feel like more AI than actual players are your opponents or allies. When I found out about Rope Racers I decided to leave aside my prejudice and give it try because it looked extremely fun. And it is! It’s a lovely multiplayer game that will surprise you with its simple yet exciting gameplay. 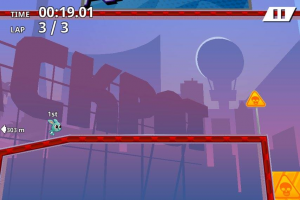 There is no actual plot on Rope Racers, since the whole game is based on racing against other players and aim for the top spots. As the title suggests, the player must swing to reach the finishing line and perform some funny acrobatics while doing so. Are you ready for the race of your life?

Rope Racers is simple in terms of both controls and difficulty. All you have to do is tap and hold on the screen while your character is running and let them swing. Repeat the same action after every swinging and that’s it! You mastered the game! Each level lasts 1-2 minutes (a lot less if you’re fast) and in order to finish it you have to complete 3 laps while avoiding the hazards that cost you some progress as you’re positioned back to the moment before you lost, thus giving other players the chance to overrun you.

Now, the game includes Leagues, starting with the Beginner League, then the Amateur League, and many others that get unlocked afterwards. To unlock each one you’ll have to level up first. Not only that but except Beginner League, you’ll have to spend coins to be able to play any other League you unlocked. While this is not pleasant, the upside is that the more coins you spend for a League, the larger the amount of coins you earn on the matches. This balances the loss in a fair way, but you need to finish in a good position to be rewarded a lot of coins. 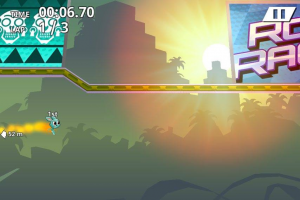 On each League the setting changes and there are also various stages with different traps and the game chooses randomly which stage you’ll be racing at. This spices up things and makes up for the small levels. Your opponents on each stage are nine and you’re basically racing against their ghosts, as they appear transparent on your screen only to let you know how close to you they are. I like that the multiplayer is designed that way because it gives you the same freedom as when playing against AI and also, there are no collisions between players. If you want to play with friends you can join the Friendly Tournament where you can race again your FB contacts simply by logging to your account.

As a mentioned earlier, the levels are small and as a result there are not many treats to collect while playing. Only a few appear each time and you need to move with precision to grab them. These treats are coins or cash. The boosts are available before starting a match so you need to activate it when it appears at the top center of the screen. The boosts have a timer (4’) and by the moment you activate them it starts counting down so don’t forget  to join a match fast to make use of it. While it sounds like an unorthodox way to use a boost, yet it works because each match lasts so little that you have time to use the boost more than once and I really like that.

Every few hours (could range from 7 to 12, maybe there’s more but that’s what I’ve seen) you get a reward which is cash. You can even double the reward by watching a game ad. Cash allows you to take part in the lottery and win a random character as well as to refill energy if you’re in great need.  You can also update a character after reaching a level, by spending coins. Speaking of energy, you can play up to 15 times in a row and you get more every few minutes. The game also offers Missions that are updated often and if completed reward you with cash. 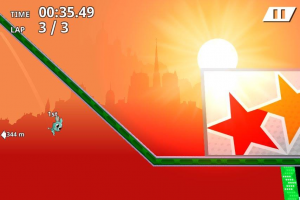 The downside of Rope Racers is that it is heavy on IAPs. To unlock a character you either need to pick one randomly if you have enough game currency or spend real money to purchase a character(s) of your choice. Collecting coins in game is not hard but considering you must spend an amount to play in different Leagues then it becomes obvious that the game is forcing the IAP to you and tempts you to buy the coin bundles. The same goes for the cash which as we said, is important for unlocking characters and refilling the energy bar. Of course it’s not done in a way that could radically affect the game but it is a bit frustrating nonetheless.

In terms of visuals, Rope Racers looks really nice with smooth 3D graphics and amazing colors. I genuinely love the way each League looks like and how vibrant and crystal-clear everything is. The character designs ranger from funny to cute and it’s always a treat for the eyes to see what new character you’ll win in the lottery. They’re very cartoony and likable. Music is powerful and fits perfectly to a racing game.

All in all, Rope Racer is a fun racing game that is perfect for relaxing and spending some free time with, and provides lots of enjoyment even if you don’t do well on a race. Actually, swinging is so fun and exciting that makes you forget about finishing first (although I admit it feels awesome achieving it!). The IAPs are a small thorn in the game as they’re practically everywhere, but the gameplay itself makes up for it. I suggest you give it a try and I’m sure you’ll have a great time and enjoy it as much as I did. Whether you like multiplayers or not, Rope Racers will not disappoint you. Share with us your thoughts in the comments below.

Rope Racers screenshots (above) and trailer (below).