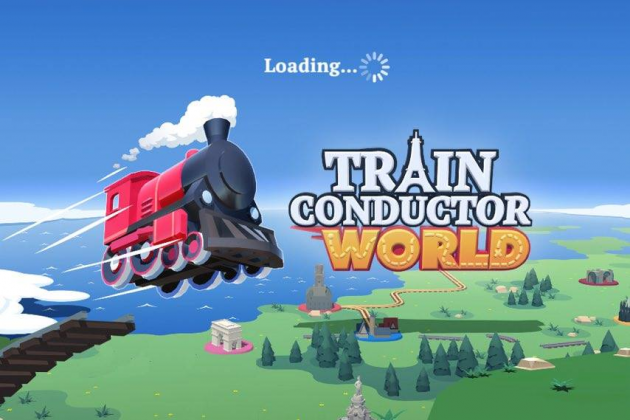 A game about trains, yeah I know what you’re thinking, it must be so much fun controlling trains…*ironic tone*. Well, as a matter of fact, it actually is! It’s beyond fun, it’s addicting and I don’t see myself falling in love with a game such as this anytime soon. Despite sounding boring, Train Conductor is built in such a way that turns an otherwise monotonous gameplay, into something unique that captivates the player right from the start. Those of you who have played the first game in the past, can relate to my impressions of its successor, which is improved in many aspects and is also free for download. 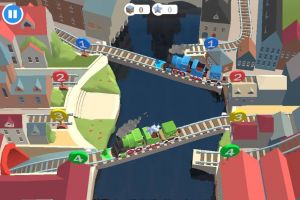 There is no backstory to support the game, as your role is to conduct and control the tracks, and watch the railway grow and expand throughout Europe, connecting various cities across the continent. Your main concern is to avoid any collisions between trains that will result in explosions and total destruction. Doing your job in the best way possible will offer you not only a great sense of satisfaction, but many rewards as well. Are you ready to conduct and navigate the trains in the unexplored terrains of Europe? It is a hard but fulfilling task that will leave no room for regrets in your mind.

Right as you begin playing, you are given guidelines to help you on your first steps. The rules are simple; you must change the lane of the train(s) so that it will go on the correct route while avoiding collisions with other oncoming trains. I’ll explain how this works later on. Firstly, let’s discuss the controls; in order to change lanes, you have to tap and drag on a lane and connect it to another one. Thus the train follows the new path instead of the original. In case many trains appear at the same time and you can’t manage them all, you can tap on them to make them stop for enough time for you to take care of the rest. These are all the actions you can take, but despite the simplicity, the game itself gets harder and more challenging as you advance. 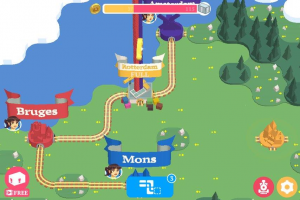 Now, as mentioned above, you’re assigned with some tracks and you must merge each of them with the correct one. To distinguish which lane must merge with which, they each have a color (yellow, blue, red and green) and so do the trains. So the train’s color must match with the lane it’s supposed to be running on. At first the trains appear slowly, thus giving you time to conduct all of them with no worries, but after you get the grip of it, things start to change drastically, and you’ll soon find yourself in a situation where many trains appear at the lane you just merged, thus causing a collision. The trick to manage multiple train appearances is to wait a few second before merging a lane, to see if a train will appear on it, and then change both their lanes at the same time. The game allows you to do that simply by using both hands.

I mentioned earlier that you can stop (or pause) trains by tapping on them. While this is very useful, it has a downside. Each train carries a star which is added to your final score when the level is completed. If you stop a train, this star is lost, so use this option only if it’s really necessary.

Speaking of stars, in order to get a perfect score on each level you need to make sure you lose none of them (by stopping them or letting them wait for directions for a long time on a lane). When a level is completed, the coins (which are also carried by the train wagons) are also added to your score and if you have reached the desired number, then you are rewarded a tile which allows you to connect step by step a European location to another. At first placing the tiles on the map is easy but the tiles are random and not only you have to be smart while placing them, but also wait until you have plenty to make better choices. 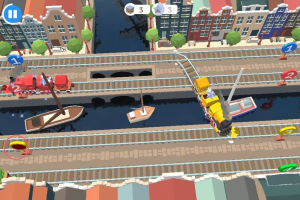 If two or more (yeah I managed to cause a collision between 3 trains…) trains collide then it is game over. If upon game over you haven’t met the objectives, you need to re-play the level. There are also Special Events apart from the main levels, where you’re asked to go to a previous station and complete some objectives for more rewards. These are optional and you only get one chance to play them. In the main levels you can continue after a game over by watching a game ad, but you can do this only once.

Sometimes you’re going to find it impossible to place every train on the right lane due to the high level of difficulty, and so leaving some continue on the wrong route or stopping them, seems like the only option. I’ve also done that many times already, but I believe that with smart thinking and right timing you can get a perfect score even in the hardest of levels (although I can’t bet on it). As you change locations, the setting changes too, to match the European city you’re in. This makes things more interesting.

Train Conductor has a limited number of IAP’s and only one of them can help advancing in the game. There is one IAP for removing the ads for $ 2,99 (you can activate it in Settings) and two different customized sets of trains for $ 3,99 each. The default trains are the Steam trains and the two other sets are the Urban Rolling Stock and the Royal Aero Express. The IAP that is tempting for the player is the one regarding the purchase of tiles. Since in-game you get one after completing successfully a level, and you are given one randomly selected, the game allows you to buy tiles of your choice through the Shop. In my case, I managed to expand to other cities only with the tiles I got from the game. They are not forceful to the player or necessary for playing. 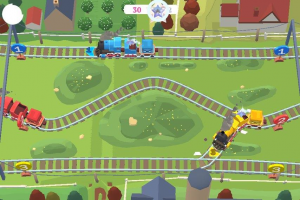 As far as the graphics go, Train Conductor excels in that department as well. The 3D graphics are fluid and the colors lively and smooth. The designs are also nice and improved over the previous installment. Our screenshots reflect this statement the authors mentioned on Twitter: "U can see our aggressive grfx scaling for old devices".

The BG music is also fitting and delighting to listen to while playing.

In conclusion, Train Conductor World is a puzzler that knows how to captivate the player and having them come back for more. Honestly, its mechanics and gameplay are so well crafted that it’s no surprise that it is so addicting. It is the type of game that can please all types of players, as long as you’re looking for something simple in terms of story and rules, yet challenging. Not to mention it’s completely free and the IAPs are 100% optional. Give it a try and let us know your thoughts on the comments below.

Train Conductor World screenshots (above) and trailer (below)