Game Review: Join forces with Alien Cows and Help them Mow in Cows vs Sheep! 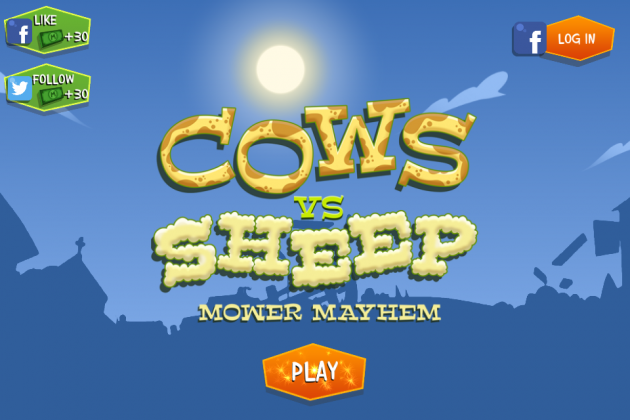 I haven’t reviewed an arcade game for some time now, but I’m back with a great one that totally took me by surprise when I decided to try it out. Cows vs Sheep is not only extremely funny and ridiculous (in the good sense), but it is also a very entertaining and addicting game that manages to capture the player’s interest with its plot and lovely characters. SPIL GAMES have definitely created a game that will please all fans of arcades and simulators alike, and even draw more players to the dark side of arcade gaming. 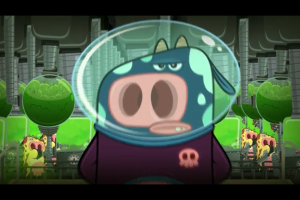 Just like the title suggests, you can’t expect the story to be serious or based in logic in any way. It’s so clever and hilarious that made me wish there was an actual movie based on it! So, apparently there is an alien cow species that wants to collect every last inch of grass on Earth available, as it is their sole source of power. In fact, it is used as a food source for the cows and with the… gas… ahem… released from the cows, they get their energy. Now, they visit Earth, and more specifically England to wreak havoc and ruin everything that stands between them and grass. As the humans are oblivious to their plans, their arch nemesis are the sheep who can’t just stand silent as the alien cows steal their food! Your job is to help the cows fulfill their purpose and enjoy the hilariousness that goes with it.

After an enjoyable animated cinematic that introduces us to the story, the game begins with a quick tutorial that teaches us the basics. The main objective is to mow as much grass as possible and of course, cause equal or more destruction as you control the alien cow driving the mowing machine. The controls are simple. You can only move left or right by tapping to the respective button that appears at the bottom of both sides of your screen. There is no other action, such as jumping, you can take. In case you want to move backwards you must tap and hold both buttons at the same time. Controlling the cow can be a bit tricky because the mowing machine moves quite fast and it’s hard to lead it exactly where you want it. But that’s something you’ll get better at as you get more accustomed to the controls. 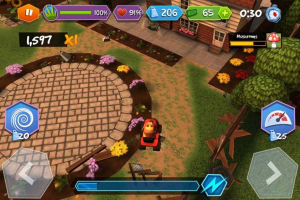 Each level comes with a different set of goals you need to complete successfully if you want a perfect score. If your score is too low (mainly if you fail to complete at least 2/3 of the goals), you can’t proceed and must re-play the same level. A good score also rewards you with unlockable power-ups such as increasing the power of the mower, or the magnet that draws collectibles to you, the tail that makes smashed objects drop more goodies and more for you to unlock. All boosts can be also upgraded after you unlock them by spending bells that you can collect in-game.

Speaking of collectibles, except from bells you can collect gnomes, mushrooms, flowers, moolah (the game’s currency) and more. Depending on the objectives that you are given, you need to focus on collecting what is asked of you before anything else. Apart from collectibles you can basically destroy everything on your way, be it fences, private property, anything that stands in your way will face the alien cow’s wrath and I have to admit it is so satisfying to turn everything into a huge mess!

The game takes place in the suburbs where houses with gardens and lots of grass exist; which is basically the perfect place for achieving your goal. Depending on the level you’re at, the setting changes although the changes are not always visible.

As you progress the objectives will become harder and more challenging for you. Keep in mind that you need to complete everything before the time is up and also try to avoid collisions with houses or the transparent walls that mark the limit of where you can move on each level, because it costs life and it could mean game over if you’re not careful. In addition, you can challenge other players to race you up the high score leaderboard. 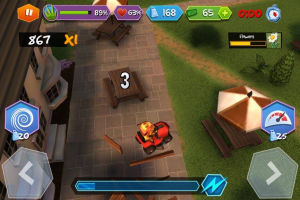 The only IAP present in the game is the option to buy the game’s currency (Moolah) with real money and then use the game’s currency to unlock power-ups in case you don’t want to wait for their individual levels to be unlocked, such as Tail, Magnet and more. The Moolah prices range from $ 1.99 for 100 Moolah and reach up to $ 49.99 for 75000 Moolah. I know these are exaggerating prices but your gaming experience is not affected if you don’t purchase them and also there are reasonable prices in the list for those that want to buy them. You can also get Moolah for free by following the game on Twitter or Facebook, or by watching game ads.

I mentioned earlier how much I enjoyed watching the cinematics that appear every few levels. The animation in these is top-notch and it’s all in 2D which is something I’m really missing in modern cartoons. As far as the game itself, the graphics are in 3D with equally amazing quality, lovely and funny character designs, and crystal-clear colors. The BG music also matches the game’s comedic atmosphere and compliments the whole game.

All in all, Cows vs Sheep is a simulator that knows how to keep you entertained with its hilarious story and events, and will keep you coming back for more because of its fun and challenging gameplay. I recommend it to all arcade fans as well as to everyone who wants something unique, with simple rules and yet enjoyable. After all, how often does someone have the chance to help alien cows?

Cows vs Sheep screenshots (above) and trailer (below)

#android #ios #games #review #free #best games #cows vs sheep
Comments (0)
< PREVIOUS ARTICLE
Q&A: I see a 'Startup Settings' screen every time I boot into Windows. How do I remove it?
NEXT ARTICLE >
Game Review: Conduct and Prevent Collisions in Train Conductor World