Home
Articles
Game Review: Shadomatic for iOS is the Free Game of the Week on the App Store!

Game Review: Shadomatic for iOS is the Free Game of the Week on the App Store! 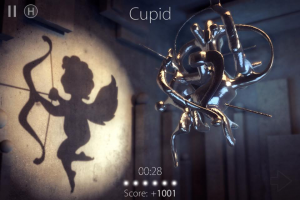 I can’t describe my feeling of joy when I found out that Shadowmatic received the "free game of the week" treatment and went from paid to freemium in the App store, even for a few days, and I knew I had to share the news with you. It is by far my favorite game that has been chosen as free app of the week compared to all that have been previously chosen. If you’ve heard of it, or purchased it when it came out, I’m sure you can understand why I’m so excited about it. I literally spent all my day playing it and I have no intention to deny that I’m officially addicted.

Now let’s take a look on what makes this game so special.

The game’s concept is easy yet challenging. Shadowmatic is a puzzler in which the player rotates abstract objects in a spotlight to find recognizable silhouettes in projected shadows, relevant to the surrounding environment. The game starts with a tutorial that teaches you the basics and returns every time it’s necessary to explain new rules. 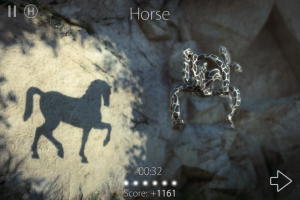 In every level you are given strangely shaped objects and your task is to make the shadow on the wall show something recognizable (be it an item, an animal, or people). To do that you have to rotate the object with your finger and depending on the orientation it takes, the shadow takes a different form as well. Rotation is not the only action you can take though; By using two fingers you can spin the shadow clockwise or counter-clockwise, while the shadow’s silhouette remains the same.

As you advance you will have to solve more complicated puzzles. For instance, the number of objects will increase (there will be 2 or 3) and you’ll have to connect them in order to form one silhouette. To do that, first you have to tap on button that appears at the bottom left of your screen, choose which piece to rotate, then tap and hold with one finger and bring together one piece with the other to create the silhouette. This will prove to be more challenging and difficult, to an already hard game and will put your brain in its limits. 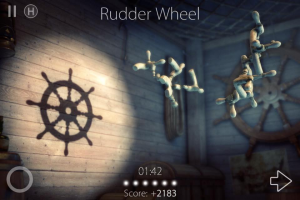 In order to know if you’re getting closer to the desired result, a progress meter appears at the bottom of the screen, and the closer you get to finding the right silhouette, the more it glows. If you make a wrong rotation the glowing will start disappearing. It is very helpful because otherwise it would be very chaotic to find the result by using your imagination only.

Speaking of imagination, you’re gonna need plenty of it, combined with smart thinking. But if you find yourself in a tight spot, you can always make use of another helping feature: the hints! You can use up to 4 hints in every level and you can make use of each of them by spending hint-points that you are rewarded based on your progress after every level. You start off with 21 hint-points but make sure you don’t spend them unless it’s absolutely necessary, because they’re quite hard to collect.
Out of the 4 hints, the first 3 only use general phrases to help you uncover the silhouette you need to create, but the 4th one reveals the image of the silhouette so all you have to do is rotate the piece(s) until you get the desired result. I tried, and succeeded (yay, kudos to me) by not using the 4th hint but there were (and probably will be), occasions that I needed the other hints to get myself moving. 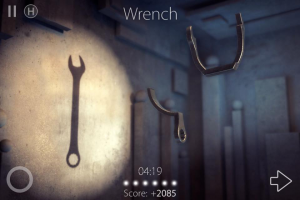 Shadowmatic also gives you the ability to share with your friends any silhouette you wish, simply by choosing the Share option found in the Settings menu. Although the main goal is to find the silhouette, there are secondary tasks that can increase your score, such as how quick you are in beating a level, unlocking achievements and finding secret silhouettes. Also, there is a board that lists several tasks and checks he ones you completed successfully. Honestly, the game has so many surprises in store that it would be a shame to name everything here, so get it on our phones and let it guide you.

The game offers purchasable hints that come in bundles and depending on how many you wish to buy, the prices range from $0.99 for 20 hints and reach up to $7.99 for 280 hints. But because you earn hints after every level, and with clever use, chances are you won't need to purchase any from the store. 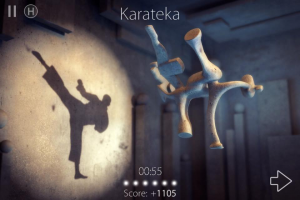 In a game such as Shadowmatic graphics play a much more important role than just making the game more appealing. They are important for the progression of the game and for that reason the developers of Shadwmatic have put a lot care and effort into perfecting the 3D designs and graphics to release a high quality game. Everything looks beautiful, calm and with soft colors.

As far as the music goes, it has an amazing soundtrack that is also available for purchase separately in iTunes.

Shadowmatic is a true masterpiece and a unique kind of game that leaves little to be desired. Get it while the free offer still stands, but even if you don’t make it in time, buying such a great game is a small price to pay if you take into account the quality and content you get. So it's highly recommended that you get it even if the offer ends.

Android version is on the works according to an interview back in February.

Shadomatic screenshots above, Trailer and Gameplay below