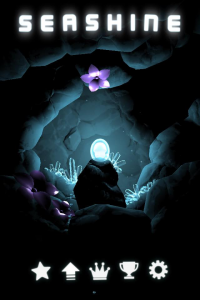 I found this gem while browsing for new game apps and I couldn’t be luckier as I stumbled upon Seashine, an endless runner, or better, an endless swimmer that hypnotises you with its graphics simply by staring at the promotional video and images. Without second thought, I downloaded it and focused completely into mastering it. Simple in terms of rules and gameplay, but hard in accomplishing the goal, it’s perfect for those who enjoy a good challenge without having to follow complicated rules.

Let’s take a more in-depth (see what I did there?) look at Seashine now, shall we?

The game takes place in the deepest part of the sea, the abyss, where only strange and scary creatures inhabit, and is covered in pitch black. That’s where our little hero, a small shiny jellyfish is born, and tries to survive in this unwelcome and hostile environment. Your job is to guide the little guy as far up as possible, absorb light, and avoid the dangers that lurk in the dark. Will you take on the challenge? 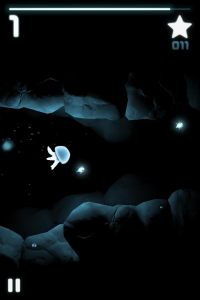 “How long will you survive in the abyss?”

That’s the phrase that encompasses all which Seaside is about. Escaping the abyss is not an option considering it’s an endless runner and not a full-fledged game with a start and finish line. Your goal is to a get a higher score than the last time and help the jellyfish earn a few more seconds of life. It sounds sad, I know, and the cute character design doesn’t help either, but these are the rules unfortunately. The game starts in a small cave where the little jellyfish is born and by taping and swiping you can control its movements and direction and guide it through narrow passages and protect it from hungry predators who are not moved by the jellyfish’s cuteness.

Swiping works great but it’s still hard to perfectly control the jellyfish because of its clumsy body. It’s very easy to collide with the cave walls, especially on your first tries, but it gets better as you start to create a pattern of movements. The levels are randomly generated though so it’s no use memorising the surroundings to move faster. While venturing through this endless labyrinth of caves you have to collect little fish of light because they’re the only source of life (and light) in this emptiness. Once in a while, a star appears that grands you a more prolonged source of light. If it takes you too long to collect light fish your life bar starts being reduced and if it reaches zero then it’s game over for you. Not only that, but bumping on dangerous fish also reduces your life; and if you add to that the huge fish that bears its teeth to devour you every time you reach a large opening, the result is a very difficult and challenging gameplay that will put your frustration limits to the test. Getting to know the game though, helps a lot with improving you skills and increase your high-score, and why not, even compete for the top positions in the leader-board. 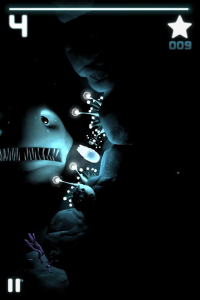 As you advance, you will be able to make use of power-ups such as, speed boost, antidote for poisoning, or the shock wave that keeps falling debris away from you, thus making the game a tad easier for you. To get the power-ups you have to spend stars, and to get them (apart from collecting them in-game) you can watch an ad and be rewarded 3 stars every time you do so. Considering how hard to get these stars are while playing, I suggest you use the ad option a lot, otherwise you can buy star packages through IAP.

Which brings us to the least favorite part of freemiums, the IAPs. Whether we like them or not, they’ve proved immune to the complains and the best we can hope for is for games to follow the example of other freemiums that make clever use of IAPs and don’t make it impossible for the player to advance without them, but rather act as a good bonus for those who want to buy them.

In the case of Seashine, it’s a little bit of both. You can buy bundles of stars with prices starting from $0.99 and reaching $2.99 depending on how many stars you wish to buy. With the most expensive one you get enough stars to have the strongest upgrade, which requires a lot of sweat to get in-game without the IAPs.Although the prices are a bit expensive, the problem with Seashine’s IAPs is that stars are really, really hard to save up when you play, thus leading you to purchase the bundles. A better balance of in-game stars would be perfect. 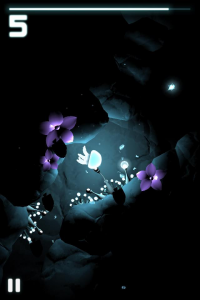 Seashine’s stronger point is none other than its graphics. Despite taking place in the sea abyss, everything looks stunning and a melancholic yet calming atmosphere surrounds everything. The illuminations are simply amazing and you can see the great contrast they create with the scary fish escaping from the dark. The music is another strong point of the game, with a fitting calm and harmonic BG music that gives the game more depth and character.

Seashine has its weakness, mainly the difficulty meter being too high, and as a result it’s not a relaxing runner. Its gorgeous graphics and music though, together with the challenging gameplay and the desire to reach further, are the aspects that make up for it and help it stand out. Give it a try and decide if it’s your cup of tea or not.

Seashine screenshots above, Gameplay video below