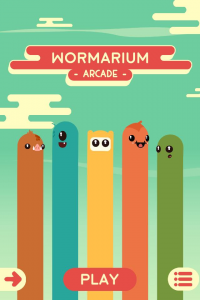 Wormarium Arcade is a very popular fast-paced action puzzler that recently made it to the best game apps on the App Store and became an instant success. There’s no wonder as to why that happened, since W. Arcade is a strategy game that is perfect for spending your free time with and enjoying every win or loss. Don’t let the cutesy designs fool you though, because its difficulty level is rather high for a game of its kind.

In W. Arcade you play as a worm, who after thousands of years of ruling the subterranean world is now being challenged by the enemy mole population. Your mission as a worm is to fill the tunnels, while avoiding and out smarting the malicious moles, whose mission is to get the holy book of worms before them, and rule over the wormworld. Yeah, I know it sounds funny but after starting playing you’ll completely forget the backstory and focus all your attention into clearing level after level.

The game takes place in tunnels with over 60 level maps, 14 extra challenging bonus maps and different settings each time, some of which are harder than others- but even the easy ones are difficult when it comes to W. Arcade. The player controls a worm that must cover all parts of the maze all while trying to avoid being eaten by the mole. This arch-enemy is one of the smartest I have encountered in this type of games. Not only it is fast, but always finds the best and fastest way to get in front of you and deny you every means of escape, as you can’t go back but have to keep moving forward. 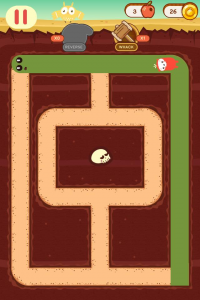 The controls are simple, and your actions require only swiping up, left and right. A useful feature is that you can swipe even before you reach the turning point thus helping the worm move faster as it remembers your action and turns when it gets there. The tunnels will many times seem impossible to clear due to their complexity and the mole doesn’t make the situation easier, but you will find your way out if you think of it as a puzzle.

Every once in a while you can unlock a treasure chest which hides power ups to help you on your hard task. These power ups include a reverse ability, which gives you the option to turn back (something not allowed normally) thus saving you from the mole- at least for the time being, or the Whack that briefly stunts the mole and buys you some time (but to be honest it didn’t help me much because its effect wears out after only 2 seconds). Between the two, I prefer the reverse power up because it actually helps and gives you a solid chance to clear the level.

Another thing you can do to outsmart the mole is to wait and let it get closer to you and then juke so he can’t cut you off easily. It is a very useful trick that will help you calculate the mole’s movements but you have to move in time because if it gets to close it is game over.

Every level consists of 3 sections, that if completed successfully reward you with coins, notes that explain the game’s plot in the form of a diary written by a worm god (really fun to read) and cute stickers that you can post up in a separate board to create fun facts about your worm and share them with your friends. Neither of the rewards affect the gameplay or offer a helping hand, but work as side-features that are designed to offer an escape route from the main game’s difficulty. As you advance you will unlock more collectibles, power ups, and pick ups. 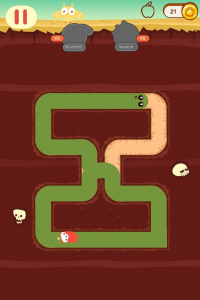 Now, to play you need to spend an apple coin in every turn. It doesn’t matter if you’re replaying the same section, you still have to pay a coin. As I mentioned above, you are rewarded coins every time you clear a whole level (meaning all 3 sections) and move on to the next. This isn’t the only way to collect coins, however. You can always get more by watching ads or by opening the treasure chests when they’re available. Although the number of coins is not a lot, I haven't run out of them up to this point. Repeating levels is an inescapable process but considering you can watch an ad after almost every loss, you always have enough to keep going.

W. Arcade offers a tutorial with tips on how to play in case some rules were confusing the 1st time you played, and a Game Speed option where you can choose if you want to play in slow, normal, or fast. The default setting is normal speed. Both features can be found on the main menu.

I think it goes without saying that W. Arcade comes with a whole lot of IAPs. There are two kinds of IAPs here: one is the coin bundles and the other is the Power Ups bundles. If you’re interested in purchases you can choose which one of the two is more important to you. The prices range from $0.99 to $1.99. 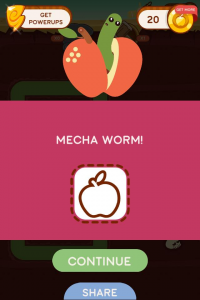 W. Arcade has lovely 2D animations, with fluid movements and crystal-clear colors. The cutesy designs certainly help minimize the frustration from a loss but also offer some black humor considering the cute smiling worm will be eaten by the equally cute mole if you’re not careful. The BG music has fun, playful melodies that match the game’s atmosphere.

All in all W. Arcade is a lovely game to have if you enjoy puzzlers that are not too easy and trigger your brain with challenges and worthy enemies. The IAPs are not forceful, except maybe in the case of power ups, since they’re harder to collect compared to the several coin collection options. But even in that case you won’t be forced to buy anything and you can clear a level with no power ups. I suggest you give it a try and learn the mechanics well before you decide if it’s worth your time or not. I highly recommend it.

Wormarium Arcade screenshots above, Gameplay below

#ios #games #review #best games #free #wormarium arcade #worms #moles
Comments (0)
< PREVIOUS ARTICLE
Game Review: Shadomatic for iOS is the Free Game of the Week on the App Store!
NEXT ARTICLE >
Game Review: Zombie's Got a Pogo by PlayFlame OU is as funny as it sounds