Home
Articles
Game Review: Zombie's Got a Pogo by PlayFlame OU is as funny as it sounds

Game Review: Zombie's Got a Pogo by PlayFlame OU is as funny as it sounds 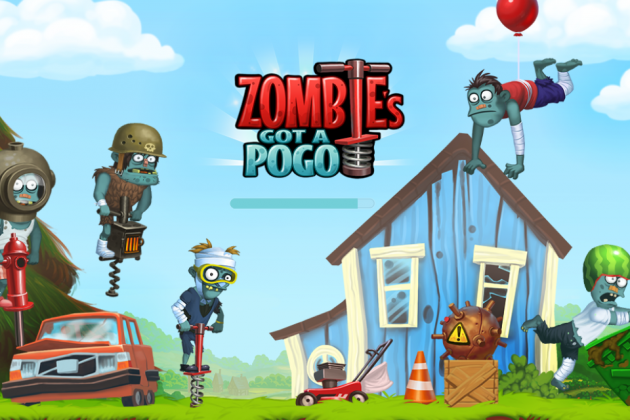 I’ve lost count of how many zombie games I’ve reviewed up until now and there’s no sign of me stopping, I’m afraid. Random zombie games in particular are my favorites so I couldn’t resist my desire to review yet another hilarious zombie game, with the very self-explanatory title “Zombie's Got a Pogo”. I didn’t know what to expect at first, but it turned out to be quite an addicting endless runner, or should I say bouncer, and I don’t see myself getting bored of it anytime soon!

So, zombies probably grew tired of hunting humans for brains and decided to change course of action. At least that’s what our main zombie hero decided, that’s why it started riding a pogo and jumping around collecting brains while other zombies have found themselves in some very comical situations and you have to jump over them to avoid finding yourself in an even more hilarious situation which is followed by game over! 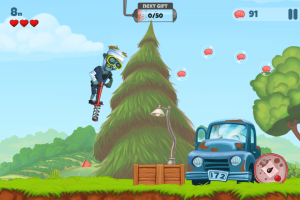 The rules are simple; you hold right or left to lean and get the pogo moving and try to collect as many brains as possible while at the same time try to avoid obstacles and other zombies by jumping over them. Colliding with an obstacle will cause the zombie’s instant death (if zombies can be considered alive that is), and you’ll have to start over.

The levels are randomly generated, so every time you play everything will be positioned differently. That game takes place in the suburbs and obstacles include canons that can turn you to pieces if you take the wrong step, tires, road cones, tractors, cars, other zombies that found themselves in hilariously awkward situations, and more. The difficulty level is not too high but controlling the pogo can be hard at times. If you don’t swipe, it will move very slowly and without jumping high enough to avoid a collision- swiping should be done carefully because although it gives you speed, it is hard to keep it balanced and a wrong move can cause the zombie to fall head on to the ground even with no obstacles around. The game provides some trampolines here and there to help you jump higher to collect brains that are too high or to help you jump over an even higher obstacle.

Typically, it gets harder as you advance but also funnier and at many occasions I found myself distracted by the other zombies that were lying around and as a result ended up losing. But I have no regrets and I’m sure I will do it again. Honestly, I don’t know if the hardest part of this game are obstacles or the hilarious distractions around you. When you lose you have the option to spend a heart to continue were you left off, or watch a game ad. The 2nd option isn’t always available though, unfortunately. 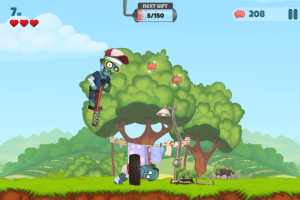 If you collect an X number of brains, set by the game, you are rewarded with either more brains or accessories for your zombie. I put roses on its head once and it was the prettiest thing I’ve seen...! Speaking of rewards, there are many categories of the things you can buy in Zombie Pogo. There are various pogos that depending on which one you pick it will improve your chances of advancing further, there are many zombies, one funnier than the other, accessories like diving masks, tiaras, paper bags and it gets weirder so I stop here, and then we have power ups and brain purchases.

As far as power up go, there are 3 of them: the Headstart, that allows you to skip 50m ahead of the starting point and move you immediately to the hard part, the Brain Multiplier that doubles the worth of every brain you collect, and last but not least, the High Jump that gives you the ability to jump 25% higher than normally. Each of these costs 25 brains and last only for one game.

Zombie Pogo includes a Brain Store where you can purchase with real money a variety of brain bundles with prices ranging from $1.99 to (hold your breath) $99.99. Yeah the prices are outrageous and judging from the cost of a good pogo from example, that requires a huge amount of brains to get, it is a bit frustrating. One the positive side, any purchase removes ads and at least you don’t need to spend a cent to be able to advance. It’s only harder without enough power ups and a good pogo. 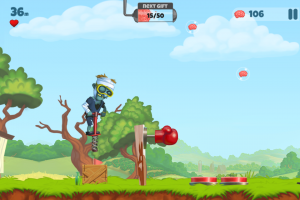 The 2D cartoony graphics and the zombie designs are very well done and definitely achieve on creating the funny atmosphere the game was meant to have. I especially love the zombies’ expressions and how completely disconnected they are from the funny situations they found themselves into. A lot of imagination was put on Zombie Pogo and it’s easy to notice. The environments, zombie accessories and zombies themselves are proof of that. The BG music and sound effects are joyful and the zombies have some rally funny cries.

Zombie Pogo is an endless game that doesn’t have a challenging gameplay or enough content to make it addicting or stand out among similar games. Its simplicity however, is what makes it worth playing. It is funny, doesn’t require a lot of skills, it’s slow, which is rare for an endless arcade where usually you have to run, and also you can take steps back which is also uncommon for this type of games. If you enjoy funny zombie games you should give it a try.

Download Zombie's got a Pogo for iOS devices here.

Android version is in the works.

Zombie's Got a Pogo screenshots