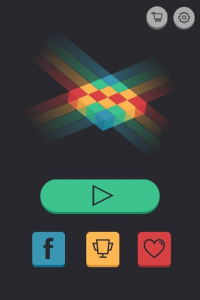 I’m sure most of you have played match-3 puzzlers or similar to them games, and there are always new ones coming out, some succeeding because of their uniqueness and others enjoying only a sort amount of fame. Today I am reviewing one of these games that know how to attract a player's attention and also turn an otherwise full of features, power ups and IAP heavy genre, into something that focuses on the brain and urges the player to think in more complicated ways to be able to progress. The game is called Two or More and it has just been released.

In Two or More your objective is to connect blocks of the same color to make a match. To make a successful match you need to collect two or more blocks but you always need to think ahead in order to make a bigger chain. The more blocks you add to the chain the higher the score gets. On each level you are given a target of necessary points that when collected allow you to move to the next stage. This target increases as you advance to make things more challenging and exciting.

The fewer remaining blocks there are left, the more bonus points you get as a reward for your good performance. At first it will be fairly easy to meet the requirements but later on you’ll have to spend more time organizing your moves than actually performing them.

To connect the blocks you simply tap on the first one and drag your finger towards the other until you have them all covered. You can go in straight lines but also take turns but you can’t connect blocks that are positioned diagonally. The board of blocks is a rather big one unlike other similar games where the blocks are fewer. This is both good and bad for you; you can use it in your advantage to make more matches and earn more points but it can also make you confused as to what action is best to take next. Not a few times, I found myself stuck and going for blocks that I shouldn’t, only to regret it a few seconds afterwards. So, act carefully and as I said earlier, think ahead. 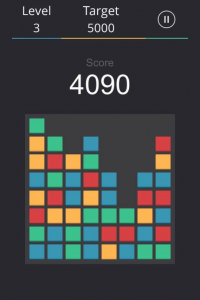 The game has three modes for now with more coming soon. There is the Classic mode where you play in the way explained above and then there is the Five Steps mode in which you have to meet the target score in only five matches, and the Flash 60” mode in which you are not given a target score but you have only 60 seconds to earn the highest possible score. By matching eight or more blocks you are rewarded with five more second. To unlock these modes you need to collect 8000 point for Five Steps and 12000 points for Flash 60” in Classic mode.

While advancing to the next level is not an easy process, collecting points is a different matter. It won’t be long before you are able to unlock a mode, as long as you are focused on the game and don't match blocks randomly.

Two or More is free of IAPs except the usual ad removal ($1.99) that exists in most FTP (free to play) games. Nothing else is purchasable and there are no power ups in the game.

The game follows the minimalistic route not only in gameplay but also in appearance. With a dark background, the focus is on the colorful blocks (green, orange, red, blue) and the jazz tunes create a very relaxing atmosphere and give you a calm feeling while playing.

In conclusion, Two or More is a game that will make you see matching games in a different light and will challenge you with its minimalistic but clever mechanics. Smart thinking and careful block combinations is all it takes to win but at the same time it is a hard task to achieve. But that's what makes a game interesting, right? Let us know your thoughts and impressions in the comments below.

Two or More screenshots (above) and trailer (below)