Home
Articles
Game Review: How far can you drive in Faily Rider?

Game Review: How far can you drive in Faily Rider? 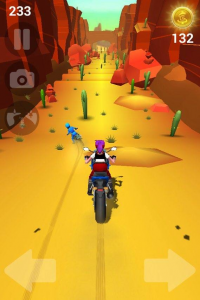 A few days ago I had my first motorbike ride experience and although I wasn’t the one driving I enjoyed the ride more than I expected and it was something I’d gladly do again. Thus, when I stumbled upon this newly featured motorbike endless runner I immediately thought that this is more than a mere coincidence and decided to give it a try. Needless to say, the way you drive in the game follows little to no real world physics and hilarity ensues every time you lose.

Faily Rider takes place in the Nevada dessert where our mc, Phil Faily (or the female equivalent; you can play whoever you desire) decided to take his first motorbike lessons. Of course, things couldn’t go smoothly and as a result he ends up on the edge of a steep embankment because of an angry goat that forced him off the road. Now it is up to you to help him get out of this difficult situation with as few injuries as possible, although we all know that in endless runners it is only a matter of time before the game over flags appear.

Controlling the motorbike is tricky at first and it will take some time before you can get the grasp of it and control its maneuvers. Although your actions are limited to moving left or right, the motorbike doesn’t react to them with the precision you’d expect thus rendering it harder to keep the mc on top of it for a long time. After some failed attempts though, you’ll figure out how to control it and learn the tricks that will get you a high score.

There are many obstacles and hazards in your way and while playing I sometimes felt as if I was avoiding them due to pure luck because of how many were around me. Your main concern are the countless cacti that can’t wait to see you flying and landing on the ground. Then there are the rocks but these can also work in your favor if you choose the right paths and use them as a jumping point. The set is completed by traffic and trains that you’ll encounter as you advance further.

On this hard but fun ride you’ll also have to collect coins and power ups such as the guns that destroy anything that comes your way including the hated cacti or shields. The coins are necessary for taking part in lotteries to win other bikes and/or costumes. If you get bored of the single player game, you can turn to the option of going on a race against your ghost and win over it. This is a bit harder than the normal game because now you have to worry about going 1st place and not only go as far as possible. 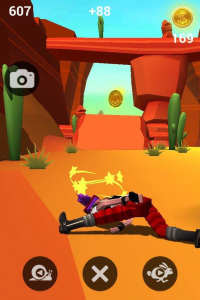 Probably the funniest part of the game is when you lose and see your character land on the ground in slow-motion in the most awkward positions. I admit it is my guilty pleasure and the reason I don’t get upset when I lose. The game also offers you the option to earn coins, bullets and shields by watching game ads so I suggest you make use of that advantage even if you don’t fancy watching ads. In addition you can get rewards through achievements e.g. to travel successfully 500 meters in a single run.

If you don’t have enough coins to take part in the lottery or if you want a specific bike of costume, you can purchase them for $ 0.99 each, or more if you choose the premium bikes that come with more abilities and advantages. With any purchase you also get rid of the ads. It is actually optional as you don’t need a purchase to enjoy the game.

Faily Rider’s graphics use many bright colors for the characters and bikes and this goes in contrast to the monotony of the dessert. The game allows you to change between the normal camera and the first person camera. I tried both and the 2nd one was too hard for me because of how precise you need to be to know when to make a turn. But for some of you could be perfect. The characters are very funny looking but the bikes are very detailed and gorgeous. The BG music is uplifting and the sound effects especially during game over never get boring.

All in all, Faily Rider is an enjoyable game that isn’t aimed at players who want a serious endless arcader. It wants you to enjoy yourselves and not take it seriously and if you play it with this mindset then you’ll have a great time. Fan of motorbikes or not, Faily Rider is too funny to simply disregard. Let us know your thoughts and impressions in the comments below.

Faily Rider thumbnails (above) and trailer (below)