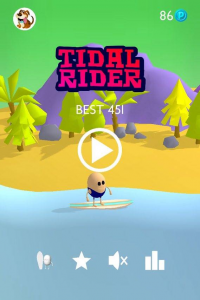 Summer might be α a thing of the recent past for the time being but who’s to say we can’t enjoy the summer time at least in digital form? There are no boundaries when it comes to gaming and that’s one the main reasons I love spending my time on them. PlayMotive has only recently released a new game called Tidal Rider and just by the title you can guess what the game is all about. Exactly, you need to master the waves in an endless arcader that will make you miss the sea even if summer ended only a month ago.

In Tidal Rider you take upon the role of a humanoid egg-like character who tries to surf and master the waves before they get to him. The control system is simple; you tap and hold to give speed to your character and release to slow down and move higher up the waves.

You’ll probably be wondering what’s the point of allowing yourself to get close to the waves if it means game over and it’s a very logical question. The reason you need to do that at times is that in many occasions you will come across birds and if you collide with them you immediately lose. So it is basically a situation where you need to choose the less likely option to lose and act on that. Thus, when you notice a bird you need to get on top of the wave to let it be swallowed by it first and then move fast to avoid drowning yourself. Also, you will need to collect coins that are necessary for unlocking other characters.

That’s basically all there is to know about Tidal Rider. It is not very exciting or with many features but it is fun and perfect for killing some time with. Could get boring quite easily though so don’t expect to stick with it for a long time. 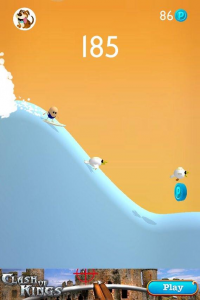 The game comes with an ad-remover and no further IAPs are present. Also, it gives you the option to collect more coins by watching game ads. The unlockable characters require 200 coins and it is not very easy to collect them so think well which character you want before you purchase them.

Tidal Rider is simple in terms of appearance with soft colors and 3D graphics. The characters are funny-looking but cute as well and the sea sound effects are really calming to listen to. Overall it is pleasant to the eye with no exaggerations.

All in all, Tidal Rider is a fun little game with nothing exceptional to make it stand out but quite enjoyable for a few rounds of playing. It is not too hard but it has its challenging moments despite its repetitiveness. It is also not the type of game that will frustrate you but it won’t excite you either. Give it a try and let us know your thoughts and impressions in the comments below.

#ios #games #review #free #tidal rider
Comments (0)
< PREVIOUS ARTICLE
How to Have Better Wi-Fi Signal in Every Part of Your House
NEXT ARTICLE >
Game Review: How far can you drive in Faily Rider?