Game Review: Enter the subconscious in Tentacles Enter The Mind! 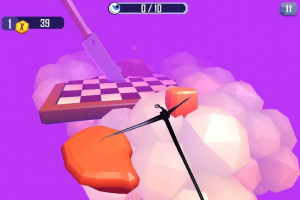 Our minds hide secrets and mysteries that even we don’t know. More specifically, if we could picture our subconscious I’m sure all sorts of obscure and illogical things would fill the most part and they would probably not make much sense whatsoever. Now, imagine being trapped in your subconscious, or even worse, in someone else’s subconscious. Just the thought of it spooks me immeasurably and I hope we’ll never have to deal with these type of possibilities outside the realm of games and movies. Now, if you’re wondering why I made this prologue, today’s game review will answer all your questions.

In Tentacles EtM you enter the subconscious of an obsessed with cute creatures, crazy scientist (who looks like a humanoid dolphin, not creepy at all) and you must destroy all shreds of cute creatures inside his head to stop him from conducting more experiments which resulted in hideous creatures, and also save him. Did I mention you’re a black creature with tentacles? Yes exactly, but strangely enough, this creature is kind of cute and likable. Help it clear the scientist’s subconscious in this crazy ride and have plenty of fun at the same time. 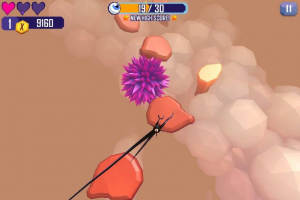 As the creature your task is to use your tentacles to grab blocks to move from one to the other. The creature has a total of 3 tentacles and with each tap one tentacle moves towards the place you pinpoint with your finger. You don’t need all tentacles in one place before you move to the other so don’t worry about that. You main concern should be to guide the creature to the block most close to it and then go to the next. In most cases, the blocks are like a map and all you need to do is follow the way. Sometimes though, you will have to choose between a few and abandon the rest.

Apart from blocks, the levels are full of clouds and other weird things (some dangerous) but you can only grab the blocks. Coins are scattered all around too but you can’t grab them. Instead you need to grab the block next to them so you’ll collect the coins while you move from your block to the other. It is a fairly easy process that you get used quite fast. At the end of a level you will land on the brain and there another creature that calls itself the scientist’s subconscious informs you about your next task and rewards you when you succeed.

Of course, there are also enemy creatures called Eyeballs for reasons you can guess, that will attack you with bombs and you must grab them to defeat them. Defeating them doesn’t only save you from their attacks but also slowly restores your health. Grabbing them is easy and I had no trouble achieving that but due to the creature’s slow and unique movements, avoiding the bombs is rather hard. Adding to that that you normally have only two hearts, then with two such attacks it is game over and you’ll have to restart the level. 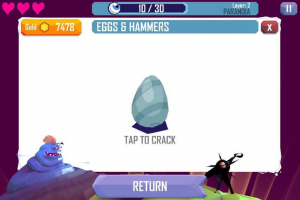 Other than coins you will occasionally come across colorful eggs and you should do your best to grab them when you see them because turning back is not allowed in the game. Anything you moved passed of, is lost. These eggs hide treasures that you can collect after finishing a level, by watching an ad and then using a hammer to break them. I find the process very fun for some reason and depending on the egg’s color the treasures range in quality and quantity.

The game also offer another mode called Survival which is recommended for players who have unlocked most abilities otherwise it will be too hard. Powers are unlocked if you have collected the required number of eyeballs that each power needs. There is the Shield, the Bomb, and the Berserker for you to activate but it will take some time before you can have them all. In the Powers section you can also restore health by spending coins. In addition there is the Gear shop where you can upgrade your abilities e.g. your body or tentacles, a little each time by spending coins.

You are also given daily bonuses and tasks e.g. destroy 10 eyeballs, that when completed reward you with coins and a next task then is set. Tentacles EtM is full of features and challenges that make it hard to stop playing it or getting bored. It is not a game you’ll want to play for hours consecutively, but definitely a game you’ll want to come back to every day. It is not simple, it requires precision and good timing, and it is perfect for players that want to try something new and exciting.

Although completely free, the game has an IAP section where you can purchase large amounts of gold in bundles in prices that range from $ 0.99 for 15,000 coins and can go up to $ 9.99 for 400,000 coins or $ 19.99 for 1m coins. Coins are however, available in abundance on each level and using the IAP is completely optional. 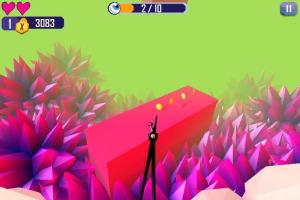 Tentacles EtM has very clean and colorful graphics and very unique and weird (in a good way) designs. The levels look surreal and the background environments are very pleasant to look at. Our little creature is black and yet it is cute although the same can’t be said about other creatures. The music is also top-notch and very melodic and calming at times.

In conclusion, Tentacles EtM is an extremely fun and unique game in both terms of story and gameplay. It is easy to master and follow the rules, but also keeps the balance between easiness and challenge. The levels are beautiful and jumping from block to block never felt so delightful. My only complaint is that Health is lost very easily if you get hit and it should last longer or take less damage. Other than that everything is fair and works great. Give it a try and let us know your thoughts and impressions in the comments below.

Also available in the Microsoft Store.

Tentacles EtM screenshots (above) and trailer (below)