Game Review: Join Dashy the Cat in her adventures 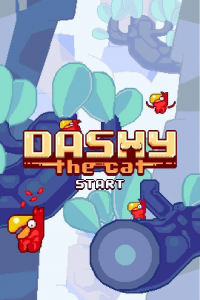 Lately I’m craving for games that remind if of old arcaders and stumbling upon Dashy the Cat has been a very pleasant surprise for me. Pixelated games have always been my weakness after all so it comes with no surprise that I would review this cute and fun little gem.

In Dashy the Cat your task is to control an adorable kitten and help her collect as many watermelons as possible. As you can see, this kitty has some unique eating habits. The only actions you can perform are swiping in all directions to get the kitty to move towards the watermelons and also climb up and down stairs. The levels are designed in a way that reminds you of a maze and it is very fun to figure out which path to follow and in most cases you’ll be able to collect all watermelons. In some places there are thorns or hidden traps that prevent you from moving forward but there are other ways to reach your destination even if you have to go on a circle.

Things start to become a bit harder when the birds show up and either walk left and right or fly up and down in stairs thus rendering it difficult for you to collect a watermelon or advance forward. In this case timing is your strongest weapon. You need to move at the right time to avoid collision with the birds as you can’t destroy them (yes I tried to jump on them in hopes that would damage them but the result was the opposite…). After you clear a level you move immediately to the next but you must activate the checkpoint at first. You are given 2 options; either watch an ad or spend watermelons to activate it. Both options are ok in my book because watermelons don’t serve another purpose like unlocking skins or powers. The game is very straight forward and doesn’t have any of these features available and part of its charm is exactly that, how it relies on its main features and the player derives joy from the game as it is. 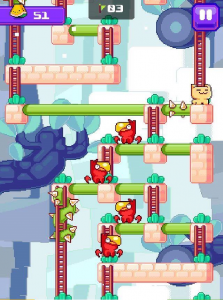 If you lose once in the same level, you can restart from where you left of by watching an ad which is very helpful as a result of the increasing difficulty. It is such a fun little game that you won’t be able to put your phone down while playing. I completed a good amount of levels before I realized how much time has passed. It is definitely one of the best games to kill time with.

The game gives you the option to remove ads and unlock all levels with a single IAP. If you can’t stand ads in games and are addicted to this game, then this purchase is worth it. apart from that, there are no other IAPs present.

Appearance-wise, Dashy the Cat is very colorful and pleasant to the eye. It has very friendly and likable designs and gives off very positive vibes to the player. The BG music is also cheerful and uplifting.

In conclusion, Dashy the Cat is a very cheerful and enjoyable little game with simple mechanics and easy controls. If you’re in need of something that doesn’t require lots of thinking and is time-consuming to master, then Dashy the Cat will be your best company. Let us know your thoughts in the comments below.

Dashy the Cat screenshots (above) and trailer (below)