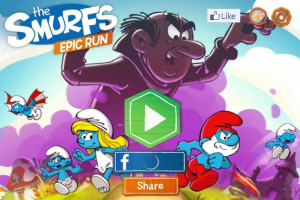 Smurfs are part of my childhood and there are very few modern cartoons that can captivate my heart the same way Smurfs and other old cartoons did. To be perfectly honest I can’t really follow the new reboots as they miss the charm of the original ones, but when I see a new game of my favorite childhood heroes, I can’t resist it. Thus, I could not disregard this Smurfs game by Ubisoft that came out many months ago but only got to try it now, and it is only natural that I would share my thoughts with you guys.

Once again Gargamel’s has set forth a plan to capture the Smurfs by casting an evil fog spell to serve his purposes. Now, the whole village is gone and you’re the only Smurf left uncaptured! Run away from the fog, explore new places, collect artifacts and gold, save all the other imprisoned Smurfs and return the village to its previous state and become a hero in the process. Will you take up on this difficult yet exciting task?

As the game’s title suggests, the gameplay centers around running and collecting items while also avoiding traps and obstacles. The control system is as simple as it can get; you simply tap to jump or tap and hold to activate the special ability of each unlocked smurf that you play as. Abilities include dash, glide, stomp, double jump and more and they will make you task easier as long as you use them at the right moments. Each level (more than 100 available) appears on a map and except the first two, you have to spend energy to be able to play them. The same applies for levels you’ve already played. I admit I was disappointed by this because energy is hard to acquire and on top of that, the energy needed for a level increases as you progress. 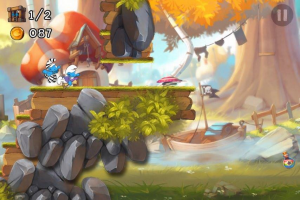 On each level you need to collect as many coins as possible and free as many imprisoned smurfs as asked of you to receive the perfect score of 3 stars after reaching the finishing line. When you free a smurf it starts running behind you and performing your actions which is very unique and fun to watch. There are normal coins but also large ones that if collected reward you with a good amount of extra gold. You will also come across jumping platforms that help you reach higher places and most importantly find Presents. Presents are large wrapped boxes that to reveal their rewards must be punched repeatedly. Since I didn’t know that the first time I came across one, I tapped once and because nothing happened I thought the game crashed. But thankfully I decided to try again before restarting. Inside a present is a lottery ticket that you scratch after the level is over and see what you won. I’ve only gotten coins for now and I’m not sure if there are tickets with other gifts.

Of course there are traps and obstacles in your way, otherwise things would be too easy and boring. These obstacles include wooden spikes or a gum like substance that if you get in contact with slow you down and the fog will catch up to you if you don’t free yourself quickly. Enemies include strange creatures that can be defeated by jumping on them. 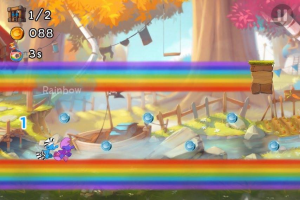 Potions are also scattered here and there and you should be on the look-out for them because by using them you get power ups such as the Magnet to attract coins to you or the Rainbow that opens a rainbow bath for you to walk on and more. A large variety of items called artifacts are also available and each gives you a bonus you can’t refuse, be it more coins, or less energy needed to unlock a level and many more. You can also find and activate the so-called companions which are little fairies that you can find in treasure chests and each has a unique ability. Please keep in mind that all these items are activated by spending coins and you need to be of a certain level to be able to use them. For smurfs too, it doesn’t matter if you unlock one in-game, you’ll still have to spend coins to actually be able to use them.

Other features include the wheel of fortune or the spin machine that give you the chance to win great gifts. Daily rewards also give you a good reason to play every day and by playing every day for a month you unlock papa smurf. Golden keys open golden chests that appear on the map. In fact the game is so full of features and surprise that when you thought you’ve tried everything, something new appears. Apart from the large amounts of coins and energy you need to spend for the aforementioned reasons, the game is very fun and charming and you can tell it was done with lots of care. 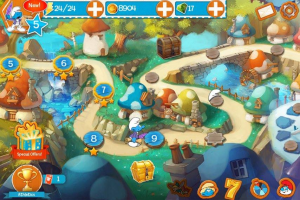 As you can guess, the game is heavy on IAPs which I know is a player’s worst nightmare and the same applies to me as well. At the shop you can find many special offers and of course you can by coin and diamond bundles. Diamonds are necessary for purchasing energy and other items and are very hard to come by. You can however, get a free energy, free coins, and a free diamond by watching an ad simply by visiting their menu.

Smurfs Epic Run has as expected gorgeous 2D graphics with crystal-clear colors, smooth movements and very detailed designs. The backgrounds are also a treat for the eye and the music very smurfy.

Fans of Smurfs will be very satisfied with this little gem but even non-fans will enjoy it immensely. The gameplay is addicting, the features countless, appearance-wise is top-notch, and its only downside is the IAPs. If you give it a try, let us know your thoughts and impressions in the comments below.

Smurfs Epic Run screenshots (above) and trailer (below)