Game Review: Down the Mountain 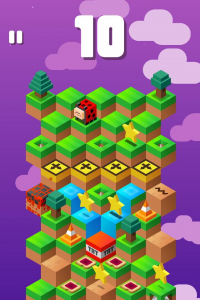 Our previous game review, Mountain Goat Mountain, was all about moving up towards the top of the mountain. This time around, we’re back with Down the Mountain- a game which has similar mechanics but a huge difference that you may have figured from the title: you have to come down the mountain- as fast as possible. It seems that these sort of games are the successors of Crossy Road, sharing many similar characteristics and adding more flavors to improve, or distinguish themselves from each other. If done right, working on an established successful formula can bring more quality and uniqueness to the game apps, and as far as Down the Mountain and Mountain Goat goes, it seems to work just fine. So, let’s move on to the game itself, shall we?

I skipped the plot on purpose because there’s hardly any to write about. The goal is simple: Descend from an infinite mountain, while making sure you avoid as many obstacles and enemies as you can, and grab stars and power-ups on your way down.

The game begins from the top of the mountain, and after taking a single step the tiles start collapsing behind you so you have to move fast if you don’t want to crumble with them. Obviously the dangers don’t stop there, as more obstacles await ahead. More specifically, you will encounter spikes that appear and disappear in a matter of seconds, deadly lava cubes waiting to turn you into crisp, sand tiles that drop down quickly (so you mustn’t stay too long on them) and cracked tiles that will collapse the same moment you step on them (so you need to avoid them at all costs). Infamous TNT tiles are also present and the wise choice would be to avoid them, but even if you can’t, make sure to jump away from them quickly because they explode shortly after you step on them. Even if you’re on the tile next to it you’re in danger of being blown up so go as far as possible. 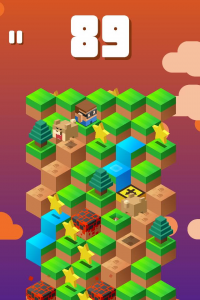 The mountain also contains water slides that let you slide but you need to be quick and jump off before they lead you to a deadly obstacle or fall. Cars and wild animals are not uncommon in mountains so make sure you avoid being hit by oncoming cars or wild lions! Many more obstacles are there to make things interesting, but also power-ups and stars for you to collect!

Luckily, the controls are simple as all you have to do to control your avatar is tap on the left or right side to jump in each direction. You also have the ability to tap and hold your finger on the screen in order to move continuously in the same direction. Moving backwards is not an option either. No further action is needed but considering how fast you need to move, it’s hard enough even with this simple control system.

The game asks you to complete missions (over 200 of them are available) and a new one is set every time you succeed. Missions include collecting an x number of stars, or stepping on specific tiles. It's not easy to get bored with all the variety in missions despite the reoccurring rounds. It is also quite fun to see the general appearance of the round change depending on which character you choose each time. Characters (60 available) are unlocked depending on how many missions you completed, either through treasure chests that you find in-game or from the prize wheel. Although chests are not rare, keys are, therefore if you run out of them you can’t open a chest and you have to win one in-game, spend stars, or purchase it via IAP.

The game’s IAP contain an No Ads unlocking and it’s tempting because there are quite a handful of ads popping up almost after every game over but it’s nothing unbearable. The other purchases are related to the keys, as I mentioned earlier, for $0,99 per set (each set contains 4). 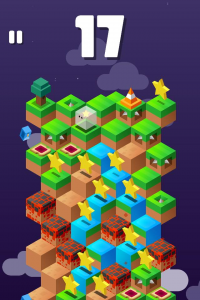 Cute 3D graphics and colorful environments complete the puzzle of this fun and challenging endless game. Even the obstacles look somewhat cute and the characters are adorable and funny. I especially love the ghost one that even though is transparent, it gets killed off just like the rest. The sounds are lively and the background music is fun and uplifting- exactly what we need to be less frustrated with the difficulty levels.

If you are a fan of mobile games that test how far you can go and don’t mind the luck of an actual finishing line, then Down The Mountain is a decent game for you. With its simple yet challenging gameplay, variety and beautiful graphics, it will offer you a relatively nice experience. Give it a try and share your thoughts about it in the comments section below!

Down The Mountain Screenshots

#ios #games #free #review #best games #down the mountain
Comments (0)
< PREVIOUS ARTICLE
How to Disable Cortana and Bing, hide the Cortana/Search Box or Turn it into an Icon on the Windows 10 Taskbar
NEXT ARTICLE >
How to Fix the "Setup Couldn't Start Properly" Error Message in Windows 10