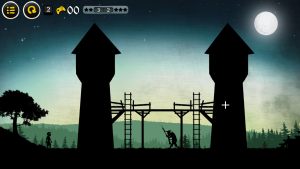 The French Revolution is one of the most important historical events not just for France and Europe but for the whole world. Many later events in different parts of the world were the results of the impact it had on other countries and their ideology. But what would happen if you could prevent at least one thing from taking place during that heated period? That’s what Vive Le Roi wants us to find out.

Vive le Roi takes us back to the French Revolution in 1793. King Louis XVI is headed to the guillotine to meet his eminent end, but his life can be saved by no one else but you. To accomplish your goal, you’ll need to solve complex puzzles, clear a total of 30 levels, and use everything around you in your favor to find a way past the guards that keep their eyes on your every move. Will you manage to achieve your goal and change history? 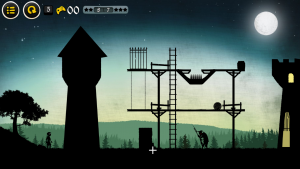 As far as rules go, the game is very simple; you control everything with the mouse and your object is to move from point A to point B with B being the guillotine with the King. But getting there requires lots of thinking and careful calculating. You will have to avoid the gaze of guards that can be in the ground or at the top of castles and basically anywhere around you.

Platforms with complicated designs, moving objects and levers that open paths are also very common. The first few levels are easy to clear but things will gradually get harder as you will have to lose many times until you figure out the correct way of performing every action. Stealth is the most important in this game. Moving at the right moment to avoid the guards and move objects under their nose.

I have to admit that I got frustrated many times before solving some puzzles but the feeling of satisfaction you get when you finally succeed made me forget all anger. Getting a perfect score (3 stars) is not easy, however. It is very hard to clear a level with the least movements possible on your first try, but since the game’s replay value is very high, you can always aim for 3 stars on your next tries.

There are a total of 30 levels, all ending with you saving the king. Don’t expect a deep plot as this game is all about solving puzzles and it does a very good job at that. 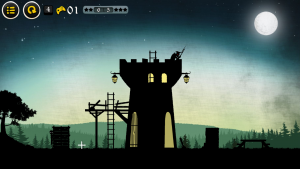 Vive le Roi is available on the Windows Store and Steam (Windows/Mac/Linux)  for $3.99. It is also available on iOS and Android for $2.99.

The 2D graphics, and simple designs match perfectly the game’s atmosphere. All levels take place at night, with the moon being your only source of light and all the characters and environments are painted black. The soundtrack is very dramatic and changes the mood of the game and urges you to win no matter what.

In conclusion, Vive Le Roi is a very enjoyable puzzler game that will test your strategic and puzzle solving abilities. I enjoyed its unique setting and its replay value. Every puzzle game fn will appreciate Vive Le Roi. It is definitely a game worth trying out. Let us know your thoughts and impressions in the comments below.

Vive Le Roi screenshots (above) and trailer (below)