Games such as Metroidvania and Castlevania have a huge fanbase and games based on the feel and look of these classics are usually welcomed with very positive reactions. A Robot Named Fight is also a roguelike game that stands out with its gory atmosphere and the many elements that it combines to give us this retro ‘90s style game. Let’s take a look at what it has to offer.

"Thousands of years have passed since the mechanical gods ascended and left the lower robots to cultivate the world. Unfortunately for those left behind, something forgotten and terrible is stirring among the stars: the Megabeast, a pulsating moon-sized orb of flesh, eyes, mouths and reproductive organs – unleashing its children onto the world like an unstoppable plague."

This is the world of the game A Robot Named Fight. You control a robot that is the sole hope of the world to be saved. You must retrieve wartime artifacts that lie deep under the surface and face disgusting fleshy monsters that roam everywhere until you finally come face to face with the ultimate enemy that is Megabeast. Are you up for the challenge? 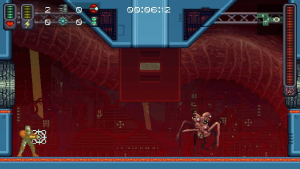 Your task as Fight is to face and defeat various disgusting monsters that look like insects made of meat that are everywhere around you. Your weapon can be aimed at all direction and even diagonally and as you progress it will be upgraded with missiles. This will make the difficult task of defeating them much easier and gives you better control at your aiming. In many places you will notice doors that can only be entered after you shoot at them. Some require more shootings than others. Inside them roam many enemies some crawling, others flying and others running towards you. When monsters are defeated you can collect hearts from them to restore your health. But be quick because they disappear fast.

Boss battles are challenging but not overly difficult, thus offering the player a great experience. Needless to say, their looks alone can be destructive. By defeating a boss your health is also fully restored. As you defeat bosses, things become more difficult and hectic. You will be introduced to the slide upgrades that allow you to enter different parts of the world but also require you to be very careful as the monsters will attack you just as you show up and it will be very easy for you to die. 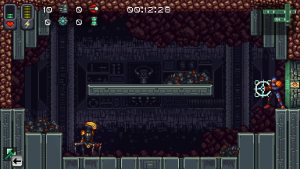 Also, keep in mind that many monsters will appear again even after you destroy them because their host is still alive. So you need to be observant and shoot at everything that moves. Shooting and blowing up monsters is not they only thing you do in the game. You also need to find the right paths and use the right timing to climb on blocks and enter new (or even old) areas.

Power ups include more powerful weapons that you will acquire in small intervals, and other neat powers such as the ability to transform into a robot that looks like the monsters, or Heat Shell that helps you survive in hot places. There are many cool abilities to discover, focused mainly on your weapon and they make the game more enjoyable and challenging.

A Robot Named Fight is available for Windows/Mac for $10. There is a special offer until 14th September that allows you to purchase the game 25% less than the original price. 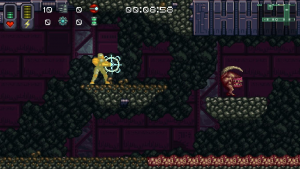 The game looks amazing in 16-bit graphics and it feels like it was taken straight from the ’90s. The designs are very detailed in both the character and enemies designs, but also in the environments. The colors are dark and moody as expected of a game with this post-apocalyptic theme. The gore is also detailed and you can see the monsters’ flesh splatter around. The whole atmosphere is very dark and pessimistic and makes it very easy to connect to the world and the devastation that surrounds it.

The BG music also fits the game perfectly as it is sad, melancholic and will affect you during gameplay. The sound effects are also top-notch especially when a monster explodes and their parts also have their own disgusting sounds as they hit the walls and ground.

A Robot Named Fight is a great Metroidvania and an action-platformer that will leave no one disappointed. It has a great gameplay, it is full of challenges and has beautiful 16-bit graphics. It has everything one would want from a roguelike game and it is worth checking out if you are a fan of this genre. Let us know your thoughts and impressions in the comments below.

Download A Robot Named Fight for PC on Steam here.

A Robot Named Fight screenshots (above) and trailer (below)