Home
Articles
Game Review: Sonic Mania is the Sonic game we've all been waiting for

Game Review: Sonic Mania is the Sonic game we've all been waiting for

After many disappointments in the Sonic franchise, we finally have a game that will please all Sonic fans. Sonic Mania is a game that can easiliy be described as the true successor to Sonic's Mega Drive.

The story begins with Sonic returning to Angel Island after some space-time anomalies in the world. There, he finds Eggman's robots digging out Phantom Ruby, which has the ability to distort the space-time around him. With the arrival of Sonic, Tails and Knuckles in the area, the ruby is activated and takes the heroes to areas of older games, while the robots now have new forces. So you run (literally) to save the world by stopping the evil plans of Eggman and his robots. 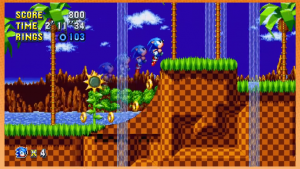 Sonic Mania is exactly what we are waiting for from a Sonic game, straight from its old formula. It contains a patchwork of old and new levels, with the former being the overwhelming majority. But the old levels may have some areas that resemble those of the Megadrive Sonic, but they are essentially re-designed. Especially in the second act of each zone the creators have introduced all the new elements they could on each level. And they have done it amazingly, both in gameplay and theme.

Sonic and his companions retain their properties from the old Sonic, with the hedgehog running with supersonic, able to use the forces of the various shields and have a big leap. Tails can fly for a short time, having access to points that are not otherwise available, while Knuckles can hover for a while sliding in the air and climbing walls.

The levels, apart from being designed so that the characters have separate paths, also have a fair balance. There are several points where careful platforming is needed, with several areas where you can run very fast so you can enjoy speed. At the same time the levels are quite complex to be able to explore like on the Sonic CD and if you want to unlock everything, exploring and multiple playthroughs are necessary. The levels also introduce various elements that you can play and experiment with. For example, Studiopolis has a ball-winning slot machine with which you win rings. In Press Garden, there are areas where you get access after your character gets frozen by one of the enemies and slides on the closest downhill. The good thing is that the different elements do not stay longer than you need and you always have to do something new on each level. 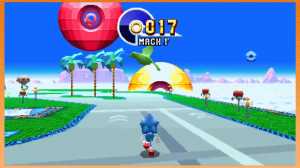 The bosses are the best of the Sonic series so far. In fact, there is a mini-boss at the end of every first chapter that is made by Eggman  and as the main boss you face one of the big robots you see in the introduction, or Eggman himself in a ridiculous mechanical construction. Others are quite easy, other irritating, and in some of them you need more than just finding a chance to jump on them to cause them harm.

The game includes the classic special red and blue balls from Sonic 3 and Dimension Heist where you get the chaos emeralds. The first lets you unlock the extras of the game and give you medals, either gold or silver. You get silver by simply picking up the blue balls, but if you want bragging rights, you need to pick up all the rings on the levels, including those created when you surround a group of blue balls, turning those that remain to red. Picking the medals unlock the extras. The only negative thing is that these levels are still common. If you have 25 rings and you are at a checkpoint then you have access.

There is also a special stage in which your goal is to catch the UFO that carries the chaos emeralds and runs like crazy. To help you, the rings increase your time, while the blue spheres increase your speed. There is something beautiful on these levels. You can do a lot of tricks, while taking risks to jump over obstacles and holes can give you a great advantage in the UFO race. 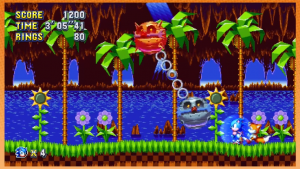 Finally, the game also features multiplayer, unfortunately only local. Like Sonic 2, you pick a character and play on split-screen. In fact, everything is "pressed" horizontally, having the same ugly effect as the Mega Drive era.

Sonic Mania is available on PS4, Xbox One, Switch and PC for $20.

One of the best parts of Sonic Mania is its graphics. It is a beautiful game with the aesthetics of its old predecessors. Sprites are great and big enough, and there is detailed animation everywhere. Colors are flashy enough, as today's hardware does not impose any restrictions on their palette. The combinations that have been made are purely 90s and the characters have many animation frames as well as the enemies, which makes the game look alive and at times spectacular. Also, there are 3D elements scattered right and left. As I have already mentioned, in the special stages the character models are the same as the 3D models of the Sonic 3D stages in Saturn. 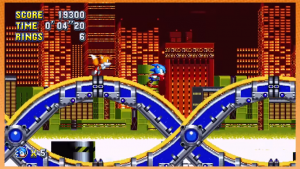 As for the sound, it is worth congratulating the talented Hyper Potions and Tee Lopes who edited the music. We are talking about amazing compositions, in the spirit of old games. The old themes have been rebuilt in wonderful remixes, which in the second act also take their own unexpected turn, as the levels become more crazy and unexpected. The new levels have probably the best music samples. The work done is top-notch. As far as the sound effects are concerned, most are taken directly from the old games, while the new ones have been made so as not to stand out.

Sonic Mania is a tribute and a step forward for the Sonic series. A step in the right direction, and still a familiar experience. You will play it and you will play it again, even if you unlock everything, just to see how well the levels are structured and how well the creators have understood what worked properly in the old Sonic games. In fact, after decades of frustration, the Sonic Mania is the best Sonic ever to come out.

Sonic Mania screenshots (above) and trailer (below)