Home
Articles
Game Review: Can you make it down the Mars Mountain?

Game Review: Can you make it down the Mars Mountain? 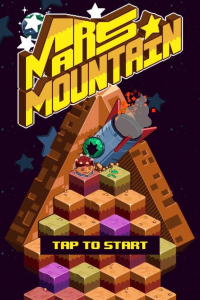 Endless arcades seem to be endless in their numbers as well, and this comes with no surprise if we take into account how popular they are among players. What’s surprising though is that there are still some of them that manage to stand out despite repeating or borrowing elements and mechanics from other ones. The game I’ll be reviewing today, Mars Mountain by Bulkipix and Tastypill, is a good example of that. Although it seems (and in many aspects is) similar to Down the Mountain and Mountain Goat Mountain (you can read both reviews by clicking on the titles), it has its own unique elements and magic that urges you to play round after round nonstop. Bulkipix is the studio behind another hit, Joe Dever's Lone Wolf and more.

Our hero is an astronaut (who can breathe perfectly fine in space apparently) that crashed on Mars and now must make his way through various deadly hazards and obstacles in order to reach his fellow astronauts who are the space crew of Apollo 741 and find canisters to repair his ship. Needless to say, your quest is dangerous and difficult. How far do you think you can make it in this unwelcome Mars Mountain?

The game begins with a quick cinematic showing the crash on the 3D mountain that looks more like a pyramid. A tutorial is available every time you start the game but you can skip it any time you like. To be honest the tutorial made the game look not so hard but just as I begun playing the actual level I realized in the worst way possible how wrong I was.

While the goal is simple and easy, descend from the infinite pyramid by tapping left or right to move to the next block, everything else is really difficult, crazy and altogether chaotic. This is not necessarily a bad thing though. Compared to Down the Mountain, Mars Mountain is more action-packed and more heavy in terms of obstacles and timing precision. Achieving a high score and collecting as many stars as possible is your main concern but to do that you must avoid all kinds of projectiles, monsters, hazards and of course avoid empty spaces that lead to death. 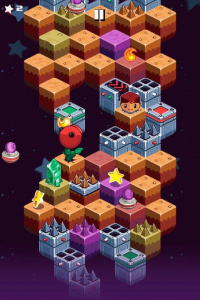 To be more specific, while playing you’ll come across blocks with spikes that come and go in a matter of seconds so you’ll have to jump on the block in the right moment, UFOs that fly in a specific pattern and you don’t wanna be on the wrong block when they fly over it, tornados that can turn you into a milkshake, fireballs that come from various directions and you’ll have to pay attention to their movements before you decide to jump on the next block, deadly carnivorous plants that shoot fire, bomb blocks that will literally blow you up if you don’t escape on time, or saw blocks that can actually move and go after you (nasty way to die) and many more. There are also neutral blocks like conveyors that drop you on the next block and this can work in your favor (if there is a star on it) or against you (if there is a trap right ahead) so use them wisely.

As you can see, Mars Mountain is a trap fest and leaves no room for putting your guard down or for sighs of relief. It’s challenging and frustrating at the same time. It will be really hard and surprising if you can make it far on your first try…or the second…or third, ahem. The fact that each time the setting changes due to the automatically generated levels doesn’t make things easier for you either. What surprised me though, is the lack of power-ups which would definitely help advance further and also spice things up. Even with unlocked characters you get no special powers and their role, although fun, is only cosmetic.

Speaking of which, the stars you collect are the currency which allows you to unlock new characters. You need 100 stars for each one but don’t be discouraged by the number. Among the playable characters are an Alien, a Shark, a Pirate, a Gorilla and many more. Stars appear often, and you can replay a game as many times as you wish with no limits such as timers, thus making it easier to collect many in a short amount of time. In addition, if you grab canisters you can boost your score.

The only present IAP on Mars Mountain is an optional ads remover. The ads are not even many and you also have the chance to earn stars by watching an ad. I appreciate how Mars Mountain is a game that doesn’t bombard you with IAPs for basically everything. Even the purchasable characters are only unlocked with the stars you collect in-game so it’s all fair and simple. 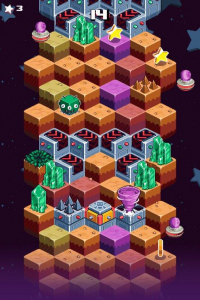 The pixelated graphics are a lovely addition the game and create a classic atmosphere that is sure to please all retro games’ fans. Plenty of colors and variations in the playable characters and enemies, are also a treat for the player. The artist behind the designs is  Giuseppe Longo, who also worked on the graphics of the puzzle platformer, Gunbrick. The BG music and tunes are joyful and groovy.

If you enjoy games that put the difficulty bar high and challenging endless arcades then you have a good reason to try out Mars Mountain. It is unquestionably a game that tests your limits and frustration nonstop and you’ll either love or hate it. It’s not the best of its kind but it is definitely unique and exciting. It is also fair on the IAP department and treats its players with respect. Try it out and let us know your thoughts in the comments below!

Mars Mountain screenshots (above) and trailer (below)